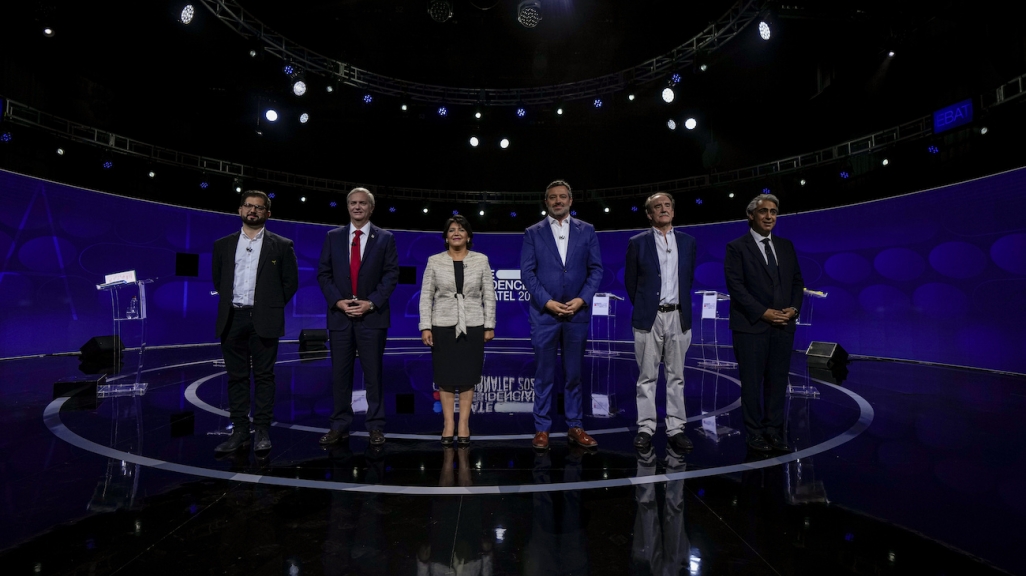 We look at top candidates’ stances on immigration, inflation, pensions, and more.

Chile’s general elections come at an inflection point in the country’s 211-year history. Two years ago, massive social unrest turned Santiago upside down, prompting the establishment of a Constituent Assembly that is currently writing a new Magna Carta to replace the Pinochet-era one.

Ahead of the November 21 first-round vote, AS/COA Online looks at the positions of the leading four candidates—Gabriel Boric, José Antonio Kast, Yasna Provoste, and Sebastián Sichel—on five issues that are at the top of voters’ minds: retirement fund withdrawals, inflation, crime and violence, immigration, and the impeachment of President Sebastián Piñera over allegations of corruption. While concerns over issues like crime are more partisan, concerns over others like inflation are felt more universally among voters.

As a pandemic economic relief measure, Chileans were allowed to make three, penalty-free withdrawals from their private retirement funds, commonly known as AFPs. Adults could take out between $1,350 and $5,760 per withdrawal, depending on the size of their account. More than 85 percent of Chileans with AFPs withdrew an estimated $55 billion combined, or about one quarter of all the credit reserves held in Chilean AFPs—an amount equivalent to roughly one fifth of the national GDP.

During the 2021 presidential campaign season, Congress debated approving a fourth withdrawal, of which 70 percent of voters said they would take advantage. The issue is arguably what most directly tanked moderate conservative Sichel’s momentum, while also hurting left-centrist Provoste’s image.

Sichel made opposing a fourth withdrawal a key part of his economic message earlier in the campaign when he was a top challenger. Then, after demurring in a September debate, he admitted that he had taken advantage of the earlier withdrawals. He’s since modified his message along the lines of restructuring the pension system toward more privatization, but his poll numbers have not recovered.

Meanwhile, Provoste, the Senate president, was a vocal supporter of a fourth withdrawal, but the measure failed in the Senate after a member of her party voted against it. The bill now is headed to a conference committee where legislators could find a compromise, though prospects are dim.

Though the progressive Boric, who serves as a deputy in Congress, supported the measure throughout the campaign, he was unable to vote on the matter since he was at home under quarantine with Covid. On the eve of the Senate vote, one of his economic advisers said publicly that the proposal was “bad public policy” and recommended the candidate refrain from supporting it. Right-wing Kast consistently said a fourth withdrawal would spur more inflation while criticizing Sichel for quibbling and applauding the senator from Provoste’s party who scuttled the bill.

Chile’s Covid stimulus spending and the pension fund withdrawals have contributed to inflation, which the Central Bank aims to keep to between 2 and 4 percent with its 3 percent target. But the figure hit 6 percent over the last 12 months, and in September and October it notched the two highest single-month rises of the last 13 years. Even before the pandemic, Chile was experiencing inflationary pressures from rising food and commodity prices, in addition to a weak Chilean peso.

In response, Chile’s central bank incrementally raised the interest rate from 0.5 percent to 2.75 percent from July through October of this year; Nasdaq predicts rates will arrive at 5.5 percent within the next 12 months.

In a Cadem poll, Kast was the candidate most people said represented their beliefs on the need to control inflation (23 percent), followed by Sichel (14 percent), Boric (13 percent), and Provoste (11 percent). Inflation is a concern across voters, though women, at 25 percent, are more concerned than are men, at 17 percent.

Kast ties inflation most squarely to the pension withdrawals. Boric has also cited unemployment and the lower rate of women’s participation in the labor market as aggravating factors.

Voters identify crime as a top concern, whether it be petty street crime, organized crime, or the use of guns by criminal groups. While there are reports of increased gang activity—including the possible domestic presence of a Venezuelan gang involved in smuggling migrants—homicides overall have fallen to pre-pandemic levels, and Chile is one of the safer countries in Latin America.

The issue is particularly important to voters on the right, 44 percent of whom say crime is one of the country’s most pressing problems, compared to 17 percent of those on the left, per pollster Activa. In a separate poll, Kast was the candidate most people said represented their beliefs on “what needs to be done to fight crime” (37 percent), followed by Boric (16 percent), Provoste (10 percent), and Sichel (9 percent).

Kast is, by all accounts, leaning into these concerns and embodies a more hard-line mano dura approach. His faceted campaign slogan “Dare to _______” becomes “Dare to live in peace” when he talks about restoring order and combatting violence, which to him includes the October 2019 protests. In the ongoing conflict in Chile’s south between the Mapuche people and the government, Kast has labeled the indigenous group’s acts of arson and clashes with security forces as “terrorism.”

Boric has one of the tougher lines to walk on this issue as he, more than any other candidate, represents the social unrest among younger Chileans that sparked the massive October 2019 street protests. Those demonstrations were met with at times lethal force by the Chilean police, known as carabineros, who came under scrutiny. Crime isn’t part of Boric’s official platform, though when he talks about it, he’s advocated for a review of the legal basis for the security forces’ power, for civilian control over them, and for putting the brakes on what he sees as a “growing militarization of public order.”

Provoste’s platform includes a “national disarmament plan,” which would entail increasing the security forces’ presence in areas with gang activity, while also reforming the country’s policing institutions. Sichel proposes creating an Interior Security Ministry and special fast-track court system to tackle drug trafficking and organized crime, while joining Kast in saying the October 2019 protests were a source of violence.

At the end of 2019 there were 1.5 million migrants in Chile, one out of every six of whom arrived in just the previous 12 months. It’s a boom driven largely by immigration from Venezuela. In 2013, there were just 5,000 Venezuelans in Chile; today, Chile hosts a half million migrants from the crisis-wracked country, making it home to the third-largest Venezuelan expat population in the world. Another 240,000 immigrants are from Peru, and 190,000 are from Haiti.

The influx of immigration is sparking a rise in xenophobia, crystallized by an incident in the city of Iquique in late September, when anti-immigrant protestors set fire to the belongings of migrants at a makeshift tent camp. Chile was one of just 17 countries that did not adopt a UN pact on migration in 2018 affirming migration as a human right after the Piñera administration pulled out of the summit at the last minute.

Kast has labeled the situation in the north a “humanitarian catastrophe” and made combating illegal immigration one of his cornerstone policy proposals. He proposes building three-meter-deep trenches along Chile’s northern border with Bolivia to contain irregular migration, defending the move as less expensive than deportations and repatriations. According to a November 14 Cadem poll, 53 percent of voters oppose his trench plan, while 45 support it.

On the other side, Boric was talking up until September of granting a pathway to residency to most immigrants in Chile, regardless of how they arrived. This set off alarm bells on the right and caused the candidate to backpedal. In his government plan released less than three weeks before the general elections, he shifted his approach to couch issues of migration in terms of individual and human rights. In contrast to using a more nationalistic lens, he’s referred to migration as a “constitutive phenomenon of our society” in a globalized world. On a pragmatic level, he wants to give more resources to border communities that host migrants and have Chile sign the UN migration pact.

Sichel proposes enlisting the armed forces and the police to enforce border security and stem future irregular migration, but offers few details about how to manage the migrants already in the country. Provoste proposes a bundle of short-term steps, such as signing the UN pact, creating a migration police to unify the government’s handling of the issue, and bolstering coordination on migration with neighboring countries, such as Mercosur partners.

On November 9, Chile’s Chamber of Deputies voted to impeach Piñera over corruption allegations brought to light in the Pandora Papers exposé. The charges, known legally as a constitutional accusation, were brought by opposition legislators, with Boric in the forefront of action with his Broad Front coalition, though he had to miss this vote as he was in quarantine.

The vote to remove Piñera from office, however, failed in the Senate on November 16. Though Provoste voted in favor of impeachment, members of her party again didn’t vote in favor, further tarnishing her image as a consensus-builder.

Both Sichel and Kast said the charges were politically motivated and criticized an opposition filibuster in the lower house as political theater, though Kast also said he didn’t deny that “serious acts, including crimes” might have occurred.

Piñera could still face criminal charges through a probe by the Attorney General’s office.

Pia Fuentealba and Chase Harrison contributed to this article.