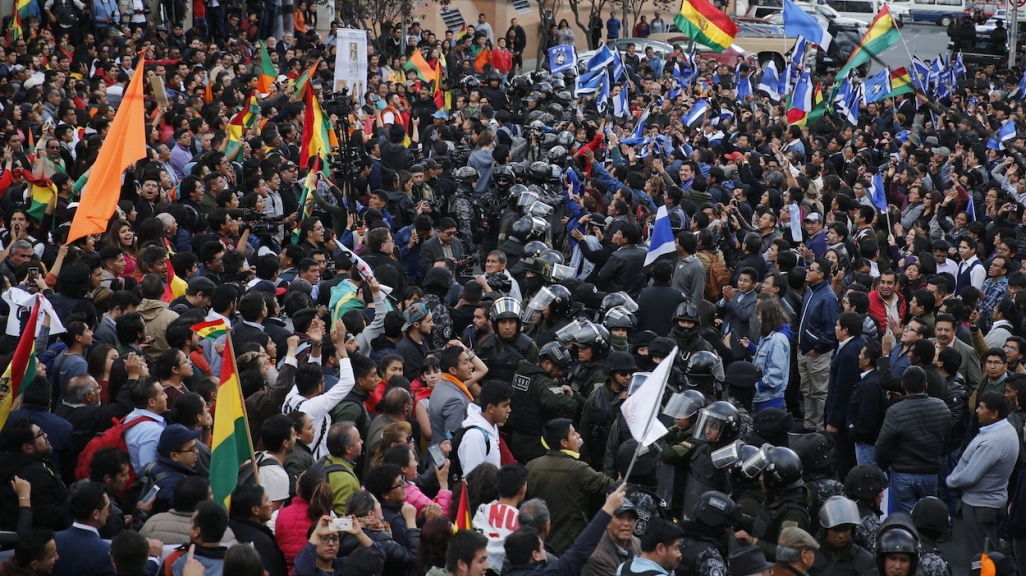 As Bolivia nears the scheduled October 18 vote, here is a look at the key players and the role they played in Evo Morales’ downfall.

Bolivia’s special election keeps getting more complicated. The Andean country held the news spotlight as a result of the controversial presidential election in which incumbent Evo Morales emerged as the winner after a nearly 24-hour vote count freeze. Amid concerns of election fraud, protests broke out across the country. After a preliminary Organization of American States (OAS) election audit found evidence of voting irregularities and manipulation, along with mounting public pressure and unrest, Morales and Vice President Álvaro García Linera stepped down on November 10, 2019 after the head of Bolivia’s military called for their resignations.

As Morales zigzagged across Latin America to reach asylum in Mexico, then-vice president of the Senate and opposition leader Jeanine Añez—originally fifth in the line of succession— declared herself interim president in the wake of several resignations, a move Bolivia’s Constitutional Court later affirmed. After the country’s legislature passed a law annulling the October 2019 results, a date for special do-over elections was set for May 3, 2020, but the COVID-19 pandemic put the date in limbo after electoral officials put the election on indefinite hold in March. After much back-and-forth, officials set the date for October 18 for general elections, with a runoff on November 29 if no candidate wins at least 50 percent of the vote or secures at least 40 percent with a 10-point margin over the closest competitor. Election proceedings will be monitored by the OAS, the European Union, and the United Nations.

There are seven presidential candidates, down from the original eight after Añez dropped out of the race in September. Along with president and vice president, Bolivians will elect all the members of Congress: 36 senators and 130 deputies. The winning tickets will serve for the 2020–2025 term. Voting is compulsory in Bolivia, and voter turnout hit nearly 90 percent in the October 2019 election with over 5.8 million people casting ballots.

Candidates were required to register by February 3. AS/COA Online profiles the candidates.

Morales cannot run in the special presidential election, but he handpicked Arce as his replacement for the Movement toward Socialism (MAS) ticket. Arce served as finance minister for most of Morales’ nearly 14 years in office, stepping away from the post for just a year to deal with an illness. He’s credited with leading Bolivia through its economic boom in which the Andean country averaged GDP growth of 4.9 percent annually between 2006 and 2018 and for being the architect of Morales’ economic policies.

David Choquehuanca, Morales’ foreign minister from 2006 to 2017, will run as Arce’s vice president. Choquehuanca—a member of Bolivia’s Aymara indigenous group like Morales and an indigenous rights advocate—was initially expected to be the MAS presidential nominee after the party nominated him as such. Morales, however, insisted that Arce was the best person to lead the party. He describes the Arce-Choquehuanca ticket as the “combination of scientific knowledge and ancient millenial knowledge, the unity of the countryside and the city.” A September Jubileo Foundation poll put the MAS ticket as voters’ top choice at 40.3 percent, with a nearly 14-point lead over the next candidate. Those numbers factored out the 9.8 percent of voters who were undecided and the 17.7 percent who said they planned to cast blank or null ballots.

Though Morales registered to run in the special elections as a MAS senator for his home department of Cochabamba, Bolivia’s Supreme Electoral Tribunal later disqualified his candidacy. The Tribunal stated that Morales did not meet the residency requirements for a candidacy given that he is living in exile in Argentina.

A former journalist, historian, and president, Mesa will lead a presidential ticket for the Citizen Community (CC) with lawyer Gustavo Pedraza as a running mate. Mesa led the CC ticket in the October 2019 election, outperforming preelection polls and winning 36.5 percent of the vote. In 2003, then-Vice President Mesa ascended to Bolivia’s presidency after his predecessor Gonzalo Sánchez de Lozada was forced to resign amid protests. After 20 months in office, Mesa met a similar fate and stepped down in the spring of 2005. The chief justice of Bolivia’s Supreme Court served as interim president for a little over seven months until Morales first took office in January 2006.

Mesa never conceded the October 2019 race, but urged his followers to remain in the streets in peaceful protest against what he described as election fraud and called for new elections (without Morales). Mesa’s 2019 campaign emphasized strengthening democratic institutions in Bolivia and prioritizing anti-corruption measures. The September Jubileo Foundation poll put Mesa in second place with 26.5 percent. Analysts based in Bolivia believe that Añez’s decision to drop out of the race may increase the likelihood of a second round between Mesa and Arce—a runoff the MAS candidate could lose if the entire opposition consolidates around Mesa

The evangelical pastor Chi Hyun Chung, who came in at a surprising third place in the October 2019 election with 8.8 percent of the vote, is running again, this time with the Front for Victory (FPV) party after his former party, the Christian Democratic Party (PDC), joined the We Believe (Creemos) coalition. In last year’s round, the South Korean-born, conservative candidate’s surge stemmed from the ability to rally supporters around his anti-LGBTQ, misogynist, and Zionist message. https://www.as-coa.org/articles/bolivia-verge-historic-runoff-election&…;

Right-wing candidate Luis Fernando Camacho heads the We Believe (Creemos) coalition ticket. The Catholic civic leader is from the eastern Santa Cruz department, the longstanding seat of anti-Morales sentiment that voted to grant itself more autonomy from La Paz during particularly tense moment in the late 2000s. Camacho was an instrumental figure in the anti-Morales protest movement that emerged both ahead of and in the aftermath of the October 2019 election. He rallied to “bring the Bible back to the palace of government”—a direct retort to Morales’ moves to put the Andean Pachamama Earth Mother at the center of the national identity—and did just that when he entered the palace in the days after Morales left office.

Former President Jorge “Tuto” Quiroga is running as the candidate for the Liberty and Democracy (Libre21) coalition. After being sworn in as vice president in 1997, Quiroga ascended to the presidency in 2001 following the health issues and resignation of Hugo Banzer, the former military dictator-turned-elected-president. The conservative candidate ran for president before in 2005 and 2014. Quiroga served as a special delegate for the Añez administration, tasked with denouncing before the international community the human rights violations allegedly committed by the Morales administration before and after the October 2019 election. Quiroga resigned from that post a month later, stating that he did not want his own views to compromise the Añez administration after he held a scathing press conference against Mexican President Andrés Manuel López Obrador.

The interim leader previously stated that she would not run in new elections, as doing so would be “dishonest,” and vowed that her main priority as president would be to facilitate a clean process. But two months into her interim presidency, Añez announced her candidacy, saying she felt compelled to run after watching candidates that had already announced fail to united a fragmented electorate. Her communications minister resigned in protest, calling Añez’s candidacy a “betrayal of democracy” and saying that she abandoned her role as the caretaker of Bolivia’s power transition.

But after months of contentious politicking amid the pandemic, Añez announced September 17 that she was ending her bid for the presidency, saying, “I’m doing this because of a risk that the vote gets divided among various candidates, and that as a consequence of that division, MAS ends up winning the election.” Añez came in third place in the Jubileo Foundation September poll with 10.6 percent, a large enough bloc of voters that, if even half shifted their support to Mesa instead, he could force a runoff with Arce. She did not endorse any of the remaining candidates.

Añez’s tenure has been polarizing, and she made quick work of carrying out a slew of moves to realign Bolivia politically and expunge the mark of Morales’ 14 years in office. Her administration accused Morales of sedition and terrorism for his alleged role in instigating nationwide protests. Meanwhile, Añez granted members of Bolivia’s Armed Forces immunity from prosecution during operations aimed at restoring public order during those same protests.

When it comes to foreign policy and regional relations, she severed Bolivia’s alliance with President Nicolás Maduro of Venezuela and removed hundreds of Cuban doctors who were working in the country. She pulled Bolivia out of the Venezuela-led Alliance for the Peoples of Our America (ALBA), a regional economic bloc. Bolivia also saw a rocky diplomatic period with Mexico after the latter country gave Morales asylum. Along with the interim administration’s break with leftist administrations in the Americas, Añez’s foreign minister named a temporary ambassador to the United States, the first restoration of diplomatic relations between Washington and La Paz in over a decade.

As a candidate, Añez called on the opposition to be united against Morales’ MAS. Longtime opposition figure Samuel Doria Medina agreed to be her running mate, adding gravitas to their Together (Juntos) ticket, a newly formed coalition led by Añez’s Democrat Social Movement (MDS). Doria Medina is a known opposition leader who ran for the presidency in 2005, 2009, and 2015, coming in second to Morales in his last bid.

Before her ascent to the presidency, Añez served for nine years as senator for Beni, a department in Bolivia’s northeastern lowlands. 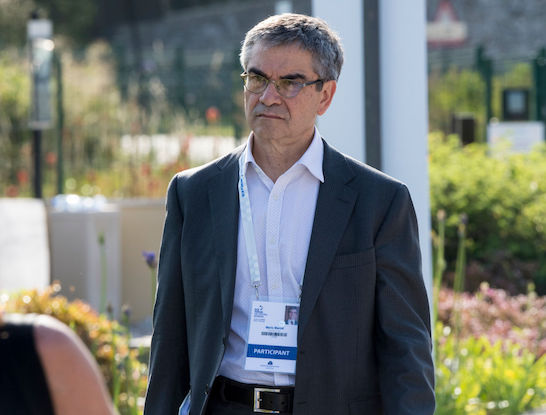