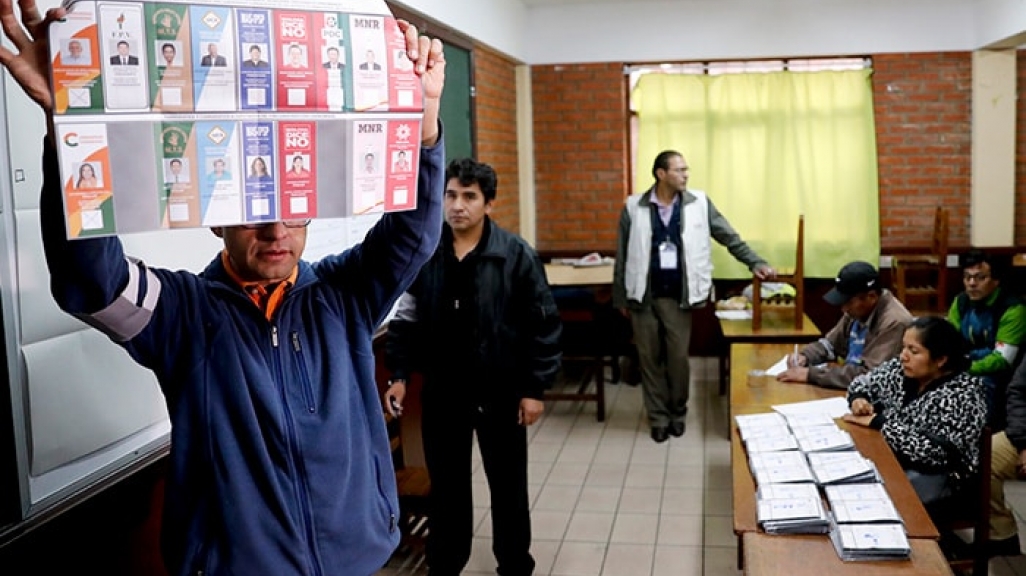 Showing a ballot in Bolivia. (AP)

Is Bolivia on the Verge of a Historic Runoff Election?

Evo Morales technically won the first round, but the result was not quite a victory for the Bolivian president, as he vies for a fourth consecutive term that would put him in office until 2025. At 8 p.m. local time and with 83.8 percent of votes counted, official early results had Morales leading the first-round general election vote with 45.3 percent to Carlos Mesa’s 38.2 percent. If the results hold, Morales and Mesa will head to a runoff.

That said, by Monday morning the country’s top electoral body had yet to release any further updates. The Organization of America States, which was observing the election, called on Bolivian authorities to explain the delay.

Morales made a brief statement Sunday evening after the first results came out in which he did not mention a runoff but said they would wait for every vote to be counted and that he had faith in the rural vote to come through for him. At a rally in La Paz, Mesa called Sunday’s results and the forcing of a runoff an “unquestionable victory.”

Mesa outperformed his position in pre-election polls, which typically had him below 30 percent. It’s a significant result for the ex-president in his first election with his name at the top of the ballot, this time on the Citizen Community (CC) ticket. Mesa was first a vice president who only came to the presidency by succession in 2003, serving just 20 months before being pushed out of office by protests.

This will be Bolivia’s first presidential runoff, a feature introduced by the Constitution Morales inaugurated in 2009. Previous Constitutions left the selection of the president up to the legislature in the case no candidate won 50 percent in the first round, precisely how Morales lost his first presidential run in 2002 when he came in second and within 1.6 percent of the first-place finisher. The official date for the country’s first runoff ever has tentatively been scheduled for December 15 and must take place within 60 days of Sunday’s vote.

Besides the prospect of a runoff itself, the night’s other surprise was the third-place finish of right-wing candidate Chi Hyun Chung, a South Korean-born evangelical pastor who’d surged in the final weeks of the campaign to finish with 8.8 percent. Óscar Ortiz, who’d polled third consistently, finished fourth with 4.1 percent.

More than 5.8 million people cast ballots, and the voter rolls swelled by some 1.4 million voters since the last presidential race. Turnout was close to 90 percent, as voting is obligatory.

Voters also selected all 36 senators and 130 deputies. While election authorities won’t be able to determine the precise allotment of seats by party until official results are certified, it’s questionable that MAS will retain its two-thirds majority—and therein the ability to nominate judicial candidates and make constitutional changes. Whether MAS retains an absolute majority and how many seats Chi’s Christian Democratic Party (PDC) gets in the 2020–2025 legislative session will have big implications for the presidential winner. MAS, CC, PDF, and Ortiz’s 21F party are set to be the only ones to hold seats in the next session as they are the only parties that got over 3 percent of votes nationally.

Doubts about the process

Heading into Sunday, many were wary the Bolivian electoral system would only recognize a result that favored the man who’s been in office for close to 14 years. Indeed it was institutions that allowed Morales’ candidacy this year after voters previously shut down the prospect. After losing a 2016 referendum to extend term limits by one term, Morales turned to Bolivia’s Constitutional Court, which ruled that term limits were unconstitutional, a decision the electoral agency then upheld when it certified his and Vice President Álvaro García Linera’s candidacy for the Movement toward Socialism (MAS) party ticket.

There were several documented instances of voter fraud on election day, and the polling firm tasked to perform the first rapid-count results was seen as having close ties to the president’s party.

Neither Morales nor Mesa has the obvious edge in a runoff. While Mesa should finally be able to corral the anti-Morales vote, it’s not a given he’ll be able to capture the votes of those who didn’t back either him or Morales in the first round. In particular, it’ll be a stretch for the former historian and journalist to win over supporters of Chi, who seemed to surge—not in spite of but because of—a starkly anti-LGBTQ, misogynist, and Zionist message.

Still, both Chi and Ortiz said they’d work with Mesa as they view Morales’ candidacy as illegal. For his part, Morales will need to generate new enthusiasm for his candidacy under the shadow of what are now two national votes in which he’s failed to reach 50 percent.