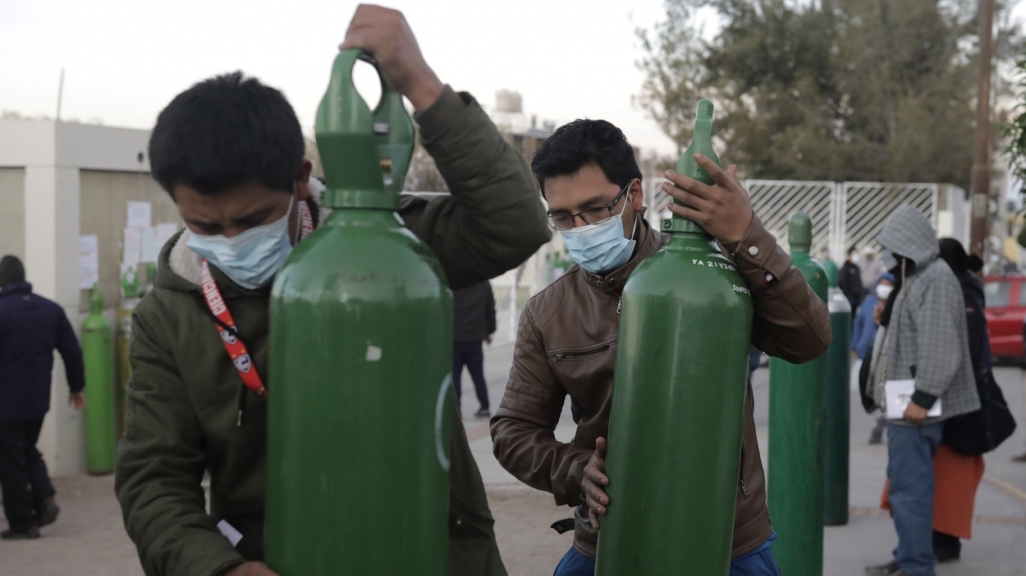 Two variants—Gamma and Lambda—already have a strong presence in the region. Delta could soon follow.

This article was first published on July 1, 2021 and has since been updated.

No region in the world has been hit harder by the pandemic than Latin America and the Caribbean, where COVID-19 has taken a terrible toll: 1.3 million lives. More than a year after the virus' arrival, a number of countries are experiencing record-breaking contagion levels, with the rate of new daily cases per capita over five times higher than that of Europe, the region with the next highest rate. And, while many Latin American countries lag when it comes to vaccination rollouts, even those outperforming international rates are facing outbreaks and lockdowns.

What’s driving the contagion? The spread of Covid variants is a major factor. More than 4,000 variants of the disease have been identified worldwide, each of which is a mutation from the original L strain found in Wuhan, China. Most mutations do not change the disease in an appreciable way, but a handful of variants have proliferated widely. The World Health Organization (WHO) designates four strains as “variants of concern,” which means researchers say they fulfill one of the following traits: increased transmissibility, increased virulence, or ability to evade public health measures. The WHO also identifies “variants of interest,” which signals that there have been clusters of a strain or that it has appeared in multiple countries.

AS/COA Online reviews the strains most relevant to Latin America at the moment and how effectively the vaccines used in the region fare against the variants.

The challenge of tracking variants in the region

While some variants appear to have limited presence in Latin America, it can be difficult ascertain just how extensively they're spreading. In order to confirm what strain of Covid a patient is infected with, samples must undergo genomic sequencing—a costly and technically difficult procedure. Much of Latin America lacks both comprehensive genomic sequencing capacity and a sufficiently trained workforce. For example, in 2020, Colombia performed 600 genomic sequences, which is the same number done on an average day in London.

The Pan American Health Organization (PAHO) is currently building a Genomic Surveillance Regional Network to aid sequencing efforts in Latin America and the Caribbean. In the meantime, much of the sequencing occurs at two reference labs, one in Chile and another in Brazil.

Only one variant of concern originated in Latin America: the Gamma variant, or P.1. It first appeared in Manaus around December 2020. After causing an outbreak in that Amazonian city where two-thirds of the 2 million citizens are thought to have contracted Covid, it spread rapidly throughout Brazil, driving the country's death tally above 500,000.

Experts vary on why the Gamma variant has been so prolific. Some believe that it has a contagion rate twice that of the original strain of the disease. Others posit that it is Gamma's high reinfection rate that's driven cases upward. One study found that one in six of those infected with the coronavirus in Manaus was reinfected by Gamma. As a result, many countries both inside and outside of Latin America banned travel from Brazil and other affected countries.

The Delta variant, known as B.1.617.2, was first detected in India in October 2020 and is also classified as a variant of concern. The WHO predicts Delta will become the most dominant strain in the world, and it already has spread rapidly through India, Europe, and North America. Preliminary research found that Delta was 64 percent more transmissible than the Alpha strain(known as B.1.1.7 and first identified in the UK) when it came to household transmission. Alpha was already estimated to be 50 percent more transmissible than the original strain, meaning that Delta is almost two and a half times more transmissible than the L strain of the virus. Research conducted in Scotland also shows hospital admissions were 85 percent higher for those with Delta compared to Alpha.

The Delta variant's spread to Latin America has thus far been limited. Mexico, now experiencing its own uptick in contagion, has the highest confirmed caseload of the variant in the region with just around 600 cases, likely because of its proximity to the United States where the variant is rapidly spreading. The Delta variant is also present in Argentina, Brazil, Chile, and Peru with fewer than 25 cases identified in each country as of July 13. Still, Chile’s health minister warned that he believed Delta would soon be dominant there.

Other variants of concern

The other two variants of concern—Alpha and Beta, known as B.1.351 and first identified in South Africa—have a limited known presence in the region, though they could still see a spread in the near future. Mexico has around 1,300 recorded Alpha cases, Brazil has 475, and all other countries in the region are below 150 cases. No country in Latin America has more than 20 known cases of the Beta variant.

The Lambda variant, also known as C.37, was first detected in Peru in August 2020 but only emerged as a significant global threat recently, with the World Health Organization declaring it a variant of interest on June 17. As a variant of interest, Lambda is considered less of an immediate global threat than the aforementioned strains, however, its impact so far has been most severe in Latin America.

The Lambda variant is primarily affecting Peru, where it represents 82 percent of new infections. In neighboring Chile, one out of three cases are believed to be Lambda. Argentina, Brazil, Colombia, Ecuador, and Mexico have all confirmed the presence of the Lambda variant within their borders. Preliminary research suggests that the Lambda strain may be more transmissible than the original strain, though a July 8 risk assessment from Public Health England notes there is no evidence that Lambda is more dangerous than Delta.

There is one other variant of interest that originated in Latin America: a sub-lineage of the Kappa variant (B.1.617.1) was documented in Colombia in January.

Vaccine efficacy against the variants

The vaccines in use globally were designed to fight the original L strain of the virus. Vaccine efficacy against the new strains is still being determined, and trials take several months to perform. Generally, it is thought that mRNA vaccines, such as the Pfizer-BioNTech and Moderna ones, are more effective against strains.

For Delta, data has shown Pfizer-BioNTech, Moderna, and AstraZeneca-Oxford are still effective against the variant, though slightly less than they are against the original strain. The AstraZeneca-Oxford results also apply to the Covishield, which is the Indian-produced version of the vaccine. The one-shot Johnson & Johnson vaccines also showed a slight drop in efficacy against Delta, but it is still considered effective overall.

There is less available research on the Lambda strain. Early studies indicate that mRNA vaccines are less effective against it than the original strain, but they are still effective.

When it comes to Chinese, Cuban, Indian, and Russian vaccines, there is less definitive research on their efficacies against new strains. The developers of the Sputnik V vaccine say that the Russian vaccine is the most effective of all vaccines against the Delta strain, though a peer-reviewed journal article shows that the vaccine produces a weaker immune response against the variants than the original strain. No definitive studies on the Chinese vaccines’ efficacy against the variants have been produced thus far.

Several Chinese vaccines are facing questions over their efficacy. These concerns may be exacerbated by the variants, which tend to be more contagious and virulent. In the case of the L strain, Sinopharm's efficacy rate is 78 percent, one-shot CanSino's is 68 percent, and that of Sinovac's CoronaVac is 51 percent. A preliminary study found that CoronaVac's efficacy rate was the same for variants as it is for the L strain, however, observational evidence shows that countries that have relied on Chinese vaccines have experienced variant outbreaks.

Chinese vaccines have proven to be an attractive option for Latin America because of the availability of contracts, their low price compared U.S.- and European-produced vaccines, and the fact that the vaccines don't require intense refrigeration. China itself has been generous in donating vaccines to the region and did so months earlier than other major world powers such as the United States.

Despite their high vaccination rates, though, both Chile and Uruguay are experiencing renewed waves of infections, with the former reinstating lockdowns and the latter contending with the region's highest per capita coronavirus death rate in May 2021. About 79 percent of doses administered in Chile are Sinovac or CanSino, and roughly 75 percent of doses in Uruguay are CoronaVac. Concerns about efficacy led Costa Rica to reject a Sinovac shipment. Other countries, like Chile and the Dominican Republic, are looking into administering a third shot for those who originally received the Sinovac jab.

In general, the idea of administering additional shots is gaining traction, especially to help battle variants. Several vaccines developers are exploring boosters—both third shots for two-dose vaccines and second shots for single-dose vaccines like Johnson & Johnson and CanSino. There is also talk of combining different vaccines to boost immunity.

Covid Check-in: The Pandemic Takes Its Toll in Uruguay

Despite a strong vaccination campaign and early mitigation success, Uruguay is facing a fierce surge in cases.