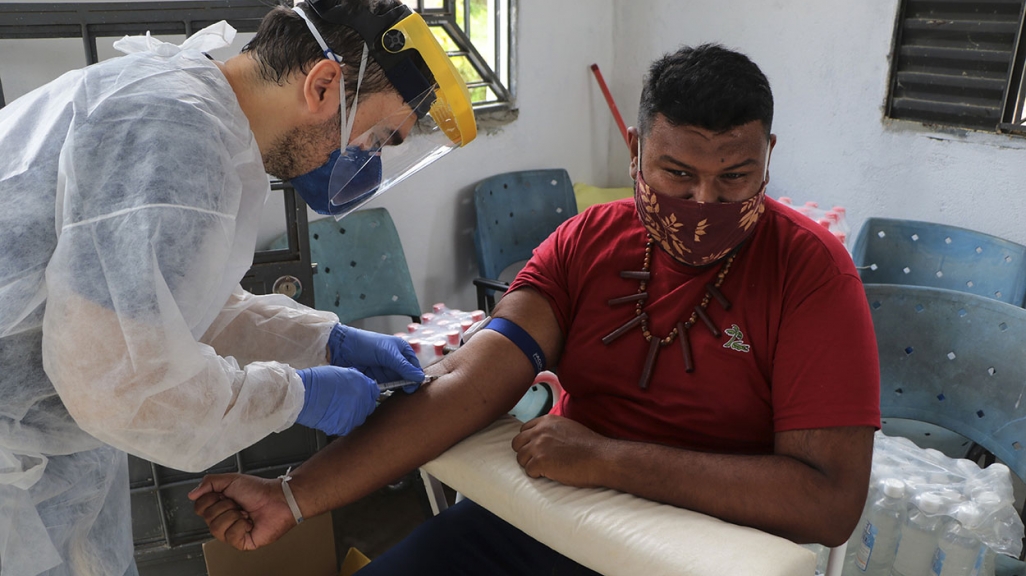 A patient receives a vaccination in Manaus. (AP)

LatAm in Focus: Vaccines and Variants a Year into the Pandemic

By Luisa Horwitz and Carin Zissis

February marks a year since the first coronavirus cases were confirmed in the Americas and the virus has left a scar, claiming more than a million lives. Now the pandemic has entered a new phase, one in which countries are trying to roll out vaccines as variants threaten to undermine the protection those vaccines offer.

“We are encountering a problem that nobody is safe until everybody is safe,” says Dr. Roselyn Lemus-Martin, a COVID-19 researcher with a PhD in molecular biology from Oxford University. She explains that Latin America—and the world at large—is in a race against time to get as many people immunized as possible before the variants spread. “With these new variants, it’s going to take us a while to get to herd immunity.”

Meanwhile, a lack of transparency about vaccines can undermine public confidence in immunizations. Lemus-Martin has gained an audience in Mexico for her use of social media to explain the science behind both vaccines and variants, as well as how mechanisms such as COVAX work. She tells AS/COA’s Carin Zissis why there was a concern with Russia’s Sputnik V—for which countries such as Argentina, Bolivia, and Mexico have acquired contracts—and how a new article in The Lancet is “good news for Latin America” as a study found that the vaccine has a 91.6 percent efficacy rate.

But first we get an on-the-ground view of the health crisis in the Brazilian Amazonas state from Pierre Van Heddegem, head of mission in Brazil for Doctors Without Borders, or MSF. In April 2020, the state capital Manaus suffered an overwhelming outbreak and researchers estimated that by June about two-thirds of the city’s 2 million inhabitants had been infected. Then, in January 2021, another outbreak struck, fueled by a variant that has brought the health system to the verge of collapse for a second time.

“There is, of course, a huge impact on the patient but there’s also a huge impact on the medical personnel,” Van Heddegem tells AS/COA Online’s Luisa Horwitz. “They are doing extremely long shifts, they have been doing this now for a long time, and they continue because there is no choice, but they are so overstretched.”

He explains the logistical and supply challenges to getting people the treatment they need in rural towns, such as Tefé and São Gabriel da Cachoeira, where MSF assists local medical facilities. Hospital saturation in Manaus prevents transfers of patients from these areas while rural facilities send boats of oxygen tanks hundreds of miles down the Amazon river for refill only to find no supply in the state capital.

The head of mission says the situation in Amazonas proves that a key takeaway is to act fast to combat outbreaks. Another is to take a holistic approach: “There’s not one magic measure, it is the entirety of these public health measures, of the vaccination campaign, of awareness campaigns, it’s all this together that might have an impact at some point.”