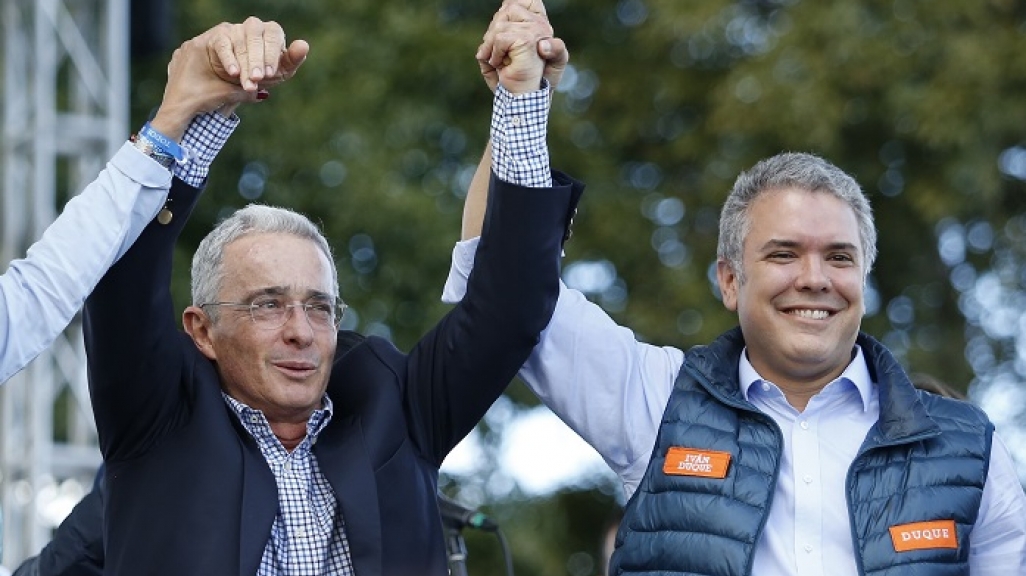 A dam, turnout, and Venezuela could all play a hand in the May 27 presidential first-round vote.

Colombians are preparing to vote for president on Sunday, May 27—whether or not all hell breaks loose. There’s a $4-million, eight-year-long hydroelectric dam project that's been threatening to collapse all week, with engineers rushing to build the last few meters of the dam’s ramparts while rains continue to fall. As officials issue evacuation orders to more than 25,000 people, with an estimated 100,000 more on alert along the Cauca River four hours north of Medellín, most candidates and their allies are trying to distance themselves from their ties to the project, though one has been wielding it to his advantage.

Poll leader Iván Duque isn’t directly implicated, though he is pulled into the fray by association with his mentor, former Antioquia Governor (and later President) Álvaro Uribe, who lobbied for the project, as did another governor of the department, Sergio Fajardo. Ex-Vice President Germán Vargas Lleras, meanwhile, oversaw infrastructure projects in the Juan Manuel Santos administration, which began in 2010—the year the project broke ground. Former Bogotá Mayor Gustavo Petro, currently second in polls, has used the issue to highlight his messages of antiestablishment politics, class struggle (the crisis has forced low-income Colombians from their homes), anticorruption, and energy reform.

2. How much autonomy will Duque have from Uribe?

There’s no question Duque would not be at the top of the pack today were it not for Uribe’s endorsement. For the better part of 2017, up to one in five voters said they’d vote for “whomever Uribe chooses.” When Uribe and his conservative coalition nominated Duque as their candidate after March 11 legislative elections, the Democratic Center senator from Bogotá jumped from single digits in polls to the top of the pack, with upwards of 35 percent voter support (and 46 percent in one poll). Indeed, on his own, Duque’s pragmatist credentials—including a decade with the Inter-American Development Bank in Washington before he joined the Senate in 2014—are palatable to much of Colombia’s business community.

But like the vote for him, the vote against Duque is largely driven by those who’d like to keep Uribe and his antiestablishment, fear-based messaging from having a direct line to the Casa de Nariño. “To say that Uribe won’t manage the Duque government is a joke,” said Green Party Senator Claudia López in a May 18 debate among vice presidential candidates (four of five of whom are women). “Uribe won’t be part of the [Duque] government because he’s too valuable in Congress,” responded Marta Lucía Ramírez, Duque’s running mate. That said, just a few months earlier in January when she was vying with Duque to be named to the top of the ticket, she said uribismo “manipulates” the country.

Besides the simple fact that the executive needs to work with the legislature to govern effectively, Colombia introduced a new rule: whoever is the runner-up in the presidential race will get an automatic seat in the Senate for the 2018–2022 session, while his running mate will have an automatic seat in the House of Representatives. The position harkens to the role of Uribe, who’s lobbed relentless attacks against the Santos administration and the FARC peace process from his perch in the Senate over the past four years. The Democratic Center controls a small plurality of seats in both houses, and Uribe is expected to become the speaker of the Senate for the next four years.

Should Petro lose to Duque in the runoff, the Senate is going to get interesting. Petro served in Congress from 2002 to 2010, during which time he became a voice for the anticorruption movement and was voted best House representative in 2006 by his colleagues. Petro has long held that Uribe himself is responsible for the “false positives” scandal that came to light during his presidential term, and suggested during an April debate that, should Uribe become directly implicated in an ongoing investigation into the scandal by the International Criminal Court, Duque should resign from the Democratic Center. In the spirit of iron sharpening iron in democratic debate, Petro is arguably better suited for Congress than the presidency, where he’d need to make more compromises than he seems wont to do. If Fajardo, on the other hand, makes it into the runoff but then loses to Duque, it would be the first time in Congress for the left-of-center former Medellín mayor.

Neither Fajardo nor Petro would have a particularly strong position in the incoming Congress: Fajardo’s Green Alliance will have 10 seats out of 108 in the Senate, while Petro’s Coalition of the Decent has four.

Vargas Lleras, meanwhile, has a much stronger position in Congress, despite his fourth-place standing in polls. His right-of-center Radical Change party holds the second-largest number of seats in the Senate and third-most in the House.

More than 36 million Colombians are registered to vote this year. Of those, some 820,000 are expats, for whom the voting period opened on May 21. Colombian elections experience low turnout—it has yet to break 50 percent in a twenty-first-century presidential election—though there are indications voters are more motivated this year. The Colombian National Registry said it registered 1.2 million new voters during the first quarter of 2018, five times the amount added during the same period in the 2014 elections. Turnout in March legislative elections was up 5 points from the previous contests.

Low turnout should favor those candidates with the most motivated supporters, i.e. Duque and Petro. If turnout is higher, however, that will favor the candidates in the middle—Vargas Lleras, Fajardo, or Humberto de la Calle—provided one of them can distinguish himself from the other two. Most polling so far has only asked the voter intention question of those voters who thought they were likely to vote in the election, meaning that the polls right now are not counting any voters who make up their mind in the last days of the campaign and then do cast a ballot. Since Duque and Petro supporters tend to be the most certain, that means supporters of the three candidates in the center could be under-sampled in polls. When surveyed by pollsters in the second week of May, 68.7 percent of voters said they would “definitely” or “probably” vote on May 27, up from 56 percent in January. Another 13 percent remained unsure if they’d head to the ballot box. If no candidate wins more than 50 percent of the vote, a runoff between the top two candidates will take place on June 17.

5. Venezuela on the horizon

The 2018 race is the first in Colombia to take place after the FARC peace agreement and subsequent demobilization. While the fraught implementation of the peace agreement with the former Marxist guerrillas is nowhere near the top issue for voters, it does signal one important change: “It’s no longer such a taboo to be from the left in Colombia,” analyst Muni Jensen of the Albright Stonebridge Group said at an AS/COA panel in New York on May 9. Petro’s candidacy in particular, she said, has caused other candidates to be much more progressive, at least in what they say publicly.

On the flip side, the dramatic influx of Venezuelan migrants into Colombia’s eastern border—now numbering over 1 million since 2015 by some estimates—could lead to a wave of xenophobic backlash in the ensuing months as Venezuela continues to deteriorate, Jensen said, a point echoed by Northwestern’s Daniel Lansberg-Rodríguez in an AS/COA Online podcast. Venezuelan migration will be a defining issue for Latin America in 2019, he said, and one that could cause “a lot of political pain” for its neighbors.