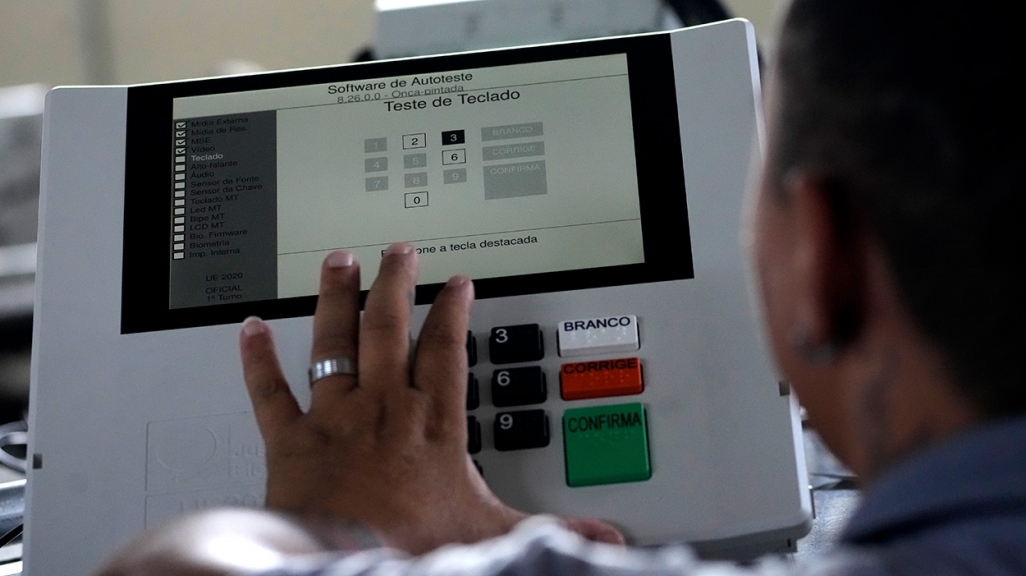 In just a few days, nearly 150 million Brazilians will go to the polls to cast their ballot in the country’s October 2 general elections. When they do, they will choose between two leaders who have already held the top job. Incumbent Jair Bolsonaro faces ex-President Luiz Inácio Lula da Silva in an extremely polarized race.

“The level of interest, passion, and acrimony is higher than any Brazilian election I've ever covered,” says Brian Winter, vice president of AS/COA and editor-in-chief of Americas Quarterly, who has reported on the country and its politics since 2006. He discusses his observations from a recent visit on the ground, what a potential runoff might look like, and Brazil’s political future.

AS/COA Online: Brian, you were just in Brazil, where you attended political rallies for Bolsonaro and for Lula. What were your impressions and was there anything you saw that surprised you?

Brian Winter: There's a feeling shared by most Brazilians that this is their most important election since democracy returned in the 1980s. The level of interest, passion, and acrimony is higher than any Brazilian election I've ever covered. I started covering Brazilian elections as a reporter way back in 2006 during a bygone era in which there was still a lot of civility in Brazilian politics. No longer.

Today, it's almost like you have two different Brazils with two radically different narratives, and, of course, that reflects what's happening in many countries, including the United States, Argentina, Colombia, Mexico, and elsewhere. What makes the Brazilian election different in some respects is this concern about what will happen after the election and the possibility of a democratic rupture, which I think almost everyone in Brazil understands is a real risk.

AS/COA Online: On this topic, Bolsonaro has spent a lot of the campaign casting doubt over the validity of the electoral system. What are the long-term implications of these attacks? Even if nothing ends up happening with Bolsonaro's challenges to electoral legitimacy, what does it mean for Brazil's institutions that this narrative became so prevalent?

Winter: It's important to remember that Brazil has been in the doldrums, broadly speaking, for more than a decade now. It's a country where people are 10 percent poorer on average than they were in 2013, so the concern is that no matter who wins in October, that person will still face a huge challenge putting the country back together and getting it on the path that it seemed to be on not that long ago toward greater prosperity, social peace, and reduced inequality.

Lula is leading in these polls because, after a difficult decade, a lot of Brazilians—including people who were really angry at Lula three, four, or five years ago—are now throwing up their hands and saying, "He seems to be the only person who is capable of getting us back to that good place that we were at in the 2000s." The concern is that the world has changed, and the country is vastly more divided and polarized now than it was then.

I think whoever wins faces that challenge and it will be even more difficult if one of the candidates says: "This was a fraudulent election, and I didn't actually lose." We've seen the cost of that here in the United States, and there's every reason to believe that if that happens in Brazil, it would be even worse there.

Ahead of the October 2 first round, learn about the faceoff between Bolsonaro and Lula, as well as congressional contests.

AS/COA Online: Polls suggest right now that the presidential race is likely going to go to a runoff, though there is a possibility Lula might take it in the first round. Do you see either candidate changing their campaign strategy in a runoff election, or is it going to mimic the dynamics of the first round?

Winter: It's kind of amazing how stable this election has been in some ways. There's been lots of noise and light and heat, but the overall trend has been very clear for more than a year now. It's two candidates, both of whom are very well known, one of them a sitting president, one of them a former president. All of their virtues and flaws are well known to the electorate.

If you look at the big picture, Bolsonaro has narrowed the gap somewhat in most polls since March as essentially his base became more tuned in to what was happening, particularly the one-third of Brazilians who are Evangelical Christians. But since the polls narrowed, they’ve kind of stayed steady. It’s not clear to me what anyone could do or say at this point that would change most Brazilians’ minds.

One interesting dynamic also is how much of this election has revolved around Bolsonaro’s personality. I believed that as the economy got better this year—and it has—that that would be reflected in Bolsonaro’s popularity and voting numbers more than it apparently has been. And what we're seeing instead in the polls as well as in my own conversations with Brazilian voters is that the people who are angry at Bolsonaro are going to stay angry at him, no matter what the economy does, for two main reasons.

First is his handling of the pandemic, which was perceived by many Brazilians as non-science-based but also callous. And second is this perception that he's constantly been warring with Brazil's other institutions: the Supreme Court, the media, and others. A lot of people just want that to go away. They want a return to the pre-Bolsonaro reality.

It's possible that the polls are wrong, but if the polls are right, I don't think they're going to change much between now and the second round if there is one.

AS/COA Online: In addition to the presidential race, there are also elections for the whole Chamber of Deputies, a third of the Senate, the state legislatures, and all the governorships. What trends are you seeing with those races?

Winter: No matter who wins the presidential race, I think we're going to see that Brazil remains a conservative country in many respects. The Congress is likely to tilt center-right or right in part because the polling tells us that the country is more conservative than it was when Lula was president the first time around. You have 70 percent of Brazilians who consistently oppose the legalization of abortion, for example. Similar percentages oppose the legalization of drugs. There is commensurate polling that shows socially conservative views in other areas in a way that is not really the norm in other countries around the region.

Take Argentina, for example. It's a country where Congress voted to legalize abortion not so long ago It's impossible to imagine that happening in the short term in Brazil. That's a function in part of an Evangelical Christian community that has grown from 10 percent of the population to a third of the population in the last three decades.

Lula appears to realize that he will inherit a different reality if he does indeed win. There's one other issue that’s specific to him, which is the Car Wash probe. It changed the way that politics is done and that coalitions are built in Brazil.

Also, Bolsonaro has resorted to measures such as the so-called "secret budget. It could politely be called an increase in pork barrel spending, as it essentially gives large amounts of money to congressmen to spend however they like in a discretionary fashion. I don't know that Lula's going to be able to do something like that because the scrutiny on him will be so intense because of his party's history with large-scale votes-for-money scandals the last time it was in office. So he will also face a challenge of building a workable government coalition.

Lots of question marks remain about the kind of difficulties that he'll face once he comes into office.

AS/COA Online: In these last few days of campaigning, what are you watching for?

Winter: I think the last few years have taught us to be skeptical of polling: Argentina in 2019, the United States in 2020, Chile in 2021 and 2022 with plebiscite. But at least for now, almost all the polls are showing Lula widening his lead, and it's definitely true that the political class senses that a first-round victory by Lula is possible, and they're acting that way.

So I'll be looking at the possibility of a first-round win, which I think would make it much more difficult for Bolsonaro to lead a January 6-style effort to overturn the result. I've had people in Bolsonaro-friendly circles tell me that if the result is three points or even five points, then they see room to try something. But if it's seven or 10 or more, as some of these polls are suggesting, Bolsonaro will see the writing on the wall and understand that he has to leave.

Then again, we don't know until we know. So, I will be very eagerly awaiting these results on October 2.