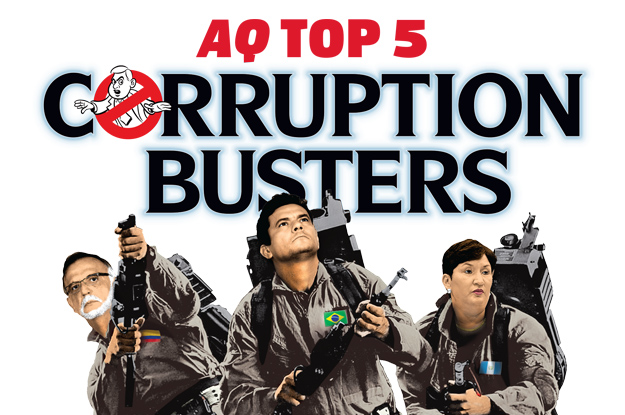 Sérgio Moro, the judge that unveiled Brazil’s Petrobras scandal, and Thelma Aldana, Guatemala’s attorney general, are among those profiled. An all-star event in New York on February 9 will gather many of these brave, skilled leaders for the first time.

New York, February 1, 2016 — Corruption has been a problem in the Americas for centuries. But something truly different—and positive—is happening in the region today. The latest issue of Americas Quarterly (AQ), the leading publication on politics, business, and culture in Latin America, spotlights how a new generation of prosecutors and activists is making historic progress in the battle against graft—and jailing those responsible, no matter how powerful they are.

This is a watershed moment for Latin American justice, Winter says. "It will make the business world more transparent and more open to new players. It will strengthen democracies. And it will help reduce poverty and inequality, as the billions of dollars lost to graft every year are redirected toward the neediest."

Four factors are behind the anti-corruption drive, says Winter: a population emboldened by democratic reform, a new generation of activist prosecutors, a rising middle class, and widespread social media adoption. "It turns out that the trends favoring Aldana’s investigation in Guatemala were almost exactly the same ones supporting Judge Sérgio Moro’s work on the Petrobras case, some 4,000 miles away," writes Winter in Americas Quarterly’s first 2016 edition.

LIVE EVENT:
In an unprecedented event Iván Velásquez, Thelma Aldana, José Ugaz, along with Brazilian prosecutor Antonio Carlos Welter, senior member of the “Lava Jato” unit investigating crimes at Petrobras, will gather in New York at Americas Society/Council of the Americas on Tuesday, February 9 from 6:00 p.m. to 7:30 p.m. These leading figures behind Latin America’s historic purge will take part in an on-record panel discussion, telling their personal stories of facing challenges and overcoming them to combat crime and government abuse that in the past would have been tolerated.

This event to be webcast live, will mark the launch of Americas Quarterly’s first 2016 edition “Corruption Busters: Behind Latin America’s Historic Crackdown,” which also includes articles on new cyber-tools for identifying — and punishing—bribe-takers, and how the profitable world of asset recovery is helping governments track down funds lost to corruption. The complete Americas Quarterly’s first 2016 edition will be available February 9 at americasquarterly.org

Americas Quarterly (AQ) is the premier publication dedicated to politics, business, and culture in the Western Hemisphere, with a focus on Latin America. Launched in 2007 and based in New York City, AQ’s award-winning magazine and website appeal to a broad audience interested in the region. Readers include top policymakers in Washington, DC, Brasilia, Mexico City, and beyond; executives at Latin American multinationals and Fortune 500 companies; opinion leaders in universities and the media; and a vast array of general readers who are passionate about Latin America. Editorial board members include former presidents Fernando Henrique Cardoso, Ricardo Lagos, Ernesto Zedillo, and Alejandro Toledo, as well as leading voices from business, journalism, finance, and academia. Americas Quarterly is an independent publication of Americas Society and Council of the Americas, which for more than 50 years have been dedicated to dialogue in our hemisphere.

A Supreme Court decision sounds encouraging on the surface – but will likely fail to protect indigenous peoples in practice.