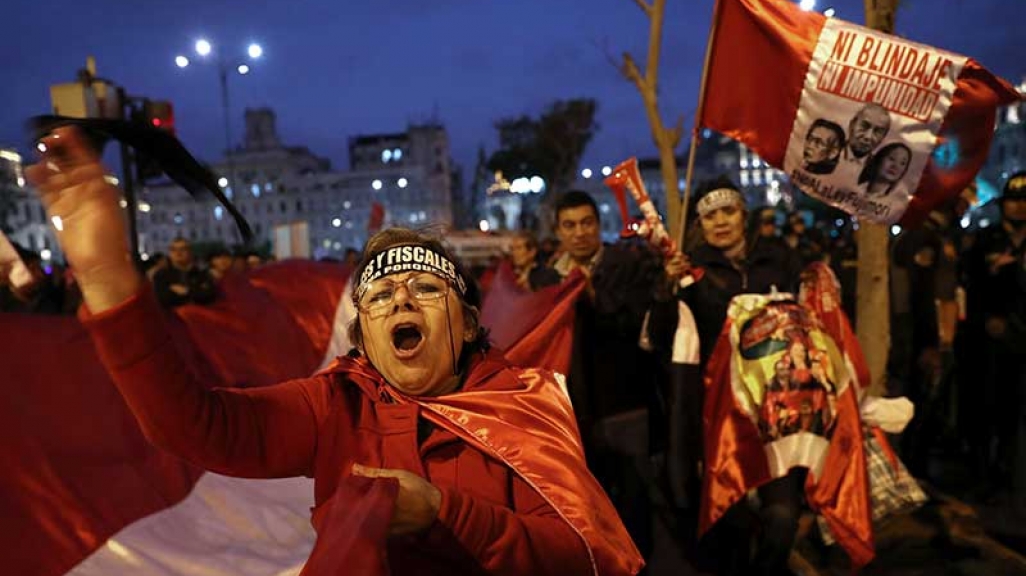 While Peru is on track to implement judicial reform, congressional meddling has likely killed a measure that would have brought back the Senate.

Updated, December 7 — It’s been quite a year in Peru. In just the last 12 months, one ex-president, Alberto Fujimori, was pardoned for his crimes against humanity, and then put back in prison. Pedro Pablo Kuczynski, the president who gave him that pardon, was forced to resign three months later. Then Fujimori’s daughter, Keiko, was herself jailed for, among other things, running a criminal organization within her party, which controls the legislature.

Peruvians, to put it bluntly, have had it. Fully 94 percent of Peruvians say the level of corruption in the country is “very high” or “high.” In light of this, President Martín Vizcarra, just months after ascending to the presidency, proposed a reform referendum, which will put four questions to the public and mark the first time Peru will attempt to modify its Constitution via referendum. The first question addresses the country’s judicial system, the second is on political campaigns, and the other two apply to the legislature.

The vote takes place December 9. Voting is mandatory for citizens between 18 and 70 years old. The fines for failing to vote range from about $6 to $25, depending on if the voter lives in a low- or high-income neighborhood. More than 24 million people will be eligible to vote on that Sunday.

Here’s a look at what Peruvians will be deciding on in December.

1. Reform how judges are elected.

Currently, the National Council of Judges elects, approves, and removes judges and prosecutors in Peru. The reform would allow the public to vote on officials nominated by a rebranded body, the National Board of Justice. Voters would also elect members to the new board, whose members would be limited to one five-year term. Analysts are the most bullish on this reform as one that has the potential to institute substantial change.

The Peruvian judiciary has been ensnared in a voracious corruption scandal this year, with several judges caught on wiretaps in the act of, among other things, negotiating sentences with a child rapist, being implicated in drug trafficking, accepting bribes, and getting involved with influence peddling.

This reform would prohibit political groups from receiving contributions from those convicted of certain crimes and other illegal or anonymous sources. The measure even goes so far as to stipulate that contributions whose origins are unclear will be “presumed to be from illicit sources.”

In early March, the former director of disgraced Brazilian construction firm Odebrecht testified that he had given money to the campaigns of all four Peruvian presidents in the twenty-first century, as well as to that of Keiko Fujimori. The testimony ultimately brought down then-President Pedro Pablo Kuczynski, who resigned a few weeks later while denying the charges.

The reform, if passed, isn’t expected to change much: the congressional reelection rate runs as just 33 percent. But the move is symbolic, as two-thirds of Peruvians consider the legislature to be the most corrupt institution in the country.

Legislators are elected to five-year terms at the same time as the president; the current session ends in 2021. The measure would allow a lawmaker to run again for office after having sat out a session, similar to the limits on consecutive presidential reelection.

4. Bring back the Senate.

Peru currently only has one legislative body, the 130-seat Congress, of which Popular Force holds 62 seats, but wields an effective majority through coalitions. Keiko Fujimori maintained significant influence as party president, frustrating much of the agendas of both Kuczynski and Vizcarra. That influence came to a screeching halt in October, however, when she was indicted and jailed on charges of money laundering and running a criminal organization from within the party itself.

The referendum proposes to create a 50-member Senate. Peru’s legislature previously had a Senate until 1992, when the authoritarian President Alberto Fujimori dissolved Congress; the new Constitution he passed the next year brought back only the lower house.

The Popular Force-led Congress, however, watered down Vizcarra’s initial proposal on this point and, among other measures, took out language that would have required equal representation among men and women in the legislature. In edits to the final referendum text, lawmakers also neutered a powerful and thorny constitutional tool the executive wields—the so-called confidence question—through which the president ultimately has the authority to dissolve uncooperative legislatures. Vizcarra invoked the measure in September to force Popular Force’s hand to take up the reform referendum in the first place.

The meddling was substantial enough that now even Vizcarra says he will vote no on the bicamerality question, and voters are following suit. Of the four measures, this is the only one that looks like it might not pass. In an Ipsos poll from late October, while the other three reforms have support from two-thirds of voters, just 35 percent of people said they’d vote in favor.

What happens in the long term?

Peru’s political landscape appears up in the air heading into 2019. Though he maintains the public’s support, Vizcarra is an independent with few allies in Congress and no influence with the partisan judiciary. But traditional parties, who got drubbed in recent regional and municipal elections, are seeing their political power evaporate at the same time. Popular Force members, for example, perhaps realizing their era of invincibility is over, are cooperating with prosecutors and testified on November 13 that members of the party were engaged in money laundering.

Editor’s note: This article originally stated that the second reform question, if passed, would require political parties to file regular campaign finance reports. While that was initially included in the executive’s original proposal, Congress removed it from the final version.