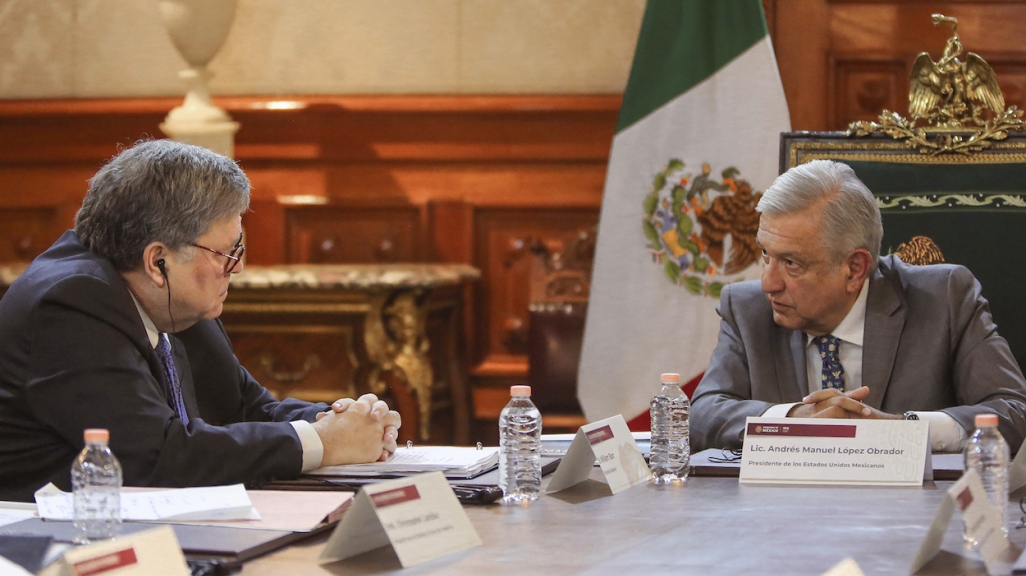 Mexico’s President Andrés Manuel López Obrador kicked off 2020 by saying that his country’s shift back to a noninterventionist foreign policy approach was paying off. At a January 7 conference for Mexican diplomats, López Obrador—or AMLO—said Latin American countries were beginning to “once again” see Mexico as a “big brother.” He added that there was also a relationship of “mutual respect” with Washington.

As Mexico both looks south while working with its neighbor to the north, here are potential pressure points in the U.S.-Mexico relationship as the United States gears up for an election year.

The ongoing rise in violence

In the wake of the November massacre of three women and six children from the binational LeBaron family in Sonora state, the Mexican government found itself facing increased pressure from the Trump administration to address crime. Trump threatened to designate Mexican cartels as terrorist groups. Doing so would, among other things, open the door to allowing U.S. troops to get involved in counterterrorism efforts in Mexico. Though Trump put that plan on hold, the idea lingers as a possible threat. Still, the LeBaron massacre brought Mexico’s ongoing issues with violence into Washington’s view.

New numbers show the problem isn’t going away: 2019 was Mexico’s deadliest year on record with 34,582 homicides, a 2.5 percent increase over 2018. Femicides rose by 10.3 percent, adding another 1,006 deaths to the murder count. Overall, the number of homicides has practically doubled since 2015. AMLO is quick to argue that the problem predates his tenure. After all, 2019 marked the fifth consecutive year in which Mexico saw an uptick in homicide rates but was the one that registered the smallest rise during that time. The country first became enmeshed in a military-focused offensive against organized crime in 2006, early in the administration of Felipe Calderón. With Mexicans worn out by years of bloodshed and impunity, AMLO’s government created the National Guard, a 50,000-strong force created to tackle organized crime that he inaugurated in June, ostensibly under civilian command but that incorporated members of the Army, Navy, and Federal Police.

Thus far, the ongoing public security woes have had little impact on AMLO’s high approval levels, and El Financiero polls show most people hold a positive opinion of the National Guard. In his fifth month in office in April 2019, AMLO asked for another six months to start seeing results on violence reduction. When November rolled around, he said pacifying the country would take more time than he thought. Then, in December, U.S. federal agents in Texas arrested Genaro García Luna, who served as a security minister in the Calderón government, for taking bribes from the Sinaloa Cartel. That news bolstered the president’s ability to blame his predecessors, but if insecurity continues unabated during his sexenio, a growing number of Mexicans are bound to hold AMLO responsible.

New moves to tackle the problem overlap with bilateral security cooperation. On January 15, just before a visit from U.S. Attorney General William Barr, Mexican officials proposed legislation for a sweeping judicial reform that could appease Washington by allowing private communications to be used as evidence and limiting legal challenges that seek to delay extraditions, per a draft obtained by Reuters. The legislation is expected to be taken up when Congress comes back into session in February. In the meantime, the bilateral agenda includes working to stem the illicit flow of guns into Mexico from the United States, with the end-of-year launch of a border verification program dubbed Operation Frozen.

The Mexican Congress is also expected to consider legislation that would take major steps toward decriminalizing marijuana by increasing the quantity an individual can possess, decreasing lengths of prison sentences for those carrying larger quantities, and creating an agency to regulate sale. Given state-by-state expansion of marijuana decriminalization measures in the United States in recent years, it’s unclear to what degree the White House will raise concerns about Mexico’s drug policy shift.

As El País’ Jacobo García wrote in early January, AMLO’s travel schedule shows a faithful commitment to his ideal that the best foreign policy is a good domestic policy. Since winning the July 2018 election, the president’s travels through Mexico are equivalent to more than three trips around the world, yet he hasn’t left the country in that time. In contrast, his predecessor, Enrique Peña Nieto, visited 19 countries in his first year in office. Foreign Minister Marcelo Ebrard often serves as AMLO’s representative at international forums abroad, although even he didn’t attend the World Economic Forum in Davos this month.

Fewer Mexican officials are traveling abroad and the AMLO government reinstated the Estrada Doctrine, which dates back to 1930 and involves a policy of nonintervention. Still, that doesn’t mean Mexico has disappeared from global affairs. The Mexican government provided temporary asylum to Bolivia’s Evo Morales last year, sending a jet for him that leapfrogged through South America to avoid tensions after he resigned from the presidency among allegations of election fraud. The first international trip Alberto Fernández took after winning Argentina’s presidential election was to meet with AMLO. Early in his term, AMLO announced a development plan for Northern Triangle countries and El Salvador’s Nayib Bukele, Guatemala’s Alejandro Giammettei, and Honduras’ Juan Orlando Hernández have all traveled to Mexico.

Earlier this month, Mexico assumed temporary presidency of Community of Latin American and Caribbean States (CELAC), a regional body established in 2011 in Caracas during the administration of Venezuela’s then-President Hugo Chávez. Bolivia, which last held the presidency and whose interim government has been in diplomatic battles with Mexico since Morales’ asylum, accused Mexico of not following the proper steps in taking over the CELAC presidency. On January 9, Ebrard hosted CELAC’s first meeting under Mexican leadership, where the political crises in Bolivia and Venezuela were absent from the the agenda for the year. A total of 29 foreign ministries were represented, but neither Bolivia nor Brazil were among them.

But if matters like CELAC have Mexico City looking south, it’s Washington that’s likely to keep the AMLO government on alert. The Trump administration already tied immigration and trade together in June 2019 when it threatened tariffs unless Mexico did more to stem migration, leading the AMLO government to dispatch the National Guard to the border with Guatemala. In January, those troops clashed with a migrant caravan trying to enter the country. Acting U.S. Secretary of Homeland Security Chad F. Wolf congratulated the Mexican government for stopping the caravan via a January 22 tweet. Meanwhile on the northern border, the United States has sent back more than 57,000 asylum seekers to Mexico to wait for their U.S. court dates and has considered sending Mexican asylum seekers to Guatemala.

Some observers quip that Trump managed, in his own way, to get Mexico to pay for the wall after all. But the Democrats are also keeping Mexico on its toes. The party’s members in the U.S. House ushered in changes to the U.S.-Mexico-Canada Agreement, including key provisions that require Mexico to meet stricter requirements, such as monitoring labor rights and allowing for collective bargaining, to lock in the support of U.S. labor groups.

AMLO promised on the campaign trail that Mexico wouldn’t be anybody’s piñata, but he’s sought to avoid direct conflict with the White House since taking office. That said, it can be difficult to anticipate when Trump will seek to apply pressure, given that criticism of Mexico helped him win the presidency in 2016. As the United States gets deeper into what’s certain to be a contentious electoral season, Trump could sell the immigration commitments he’s gained from Mexico as a win, or he could keep pushing for more.

Denise Dresser weighs in on the political game behind AMLO’s referendum on past presidents.