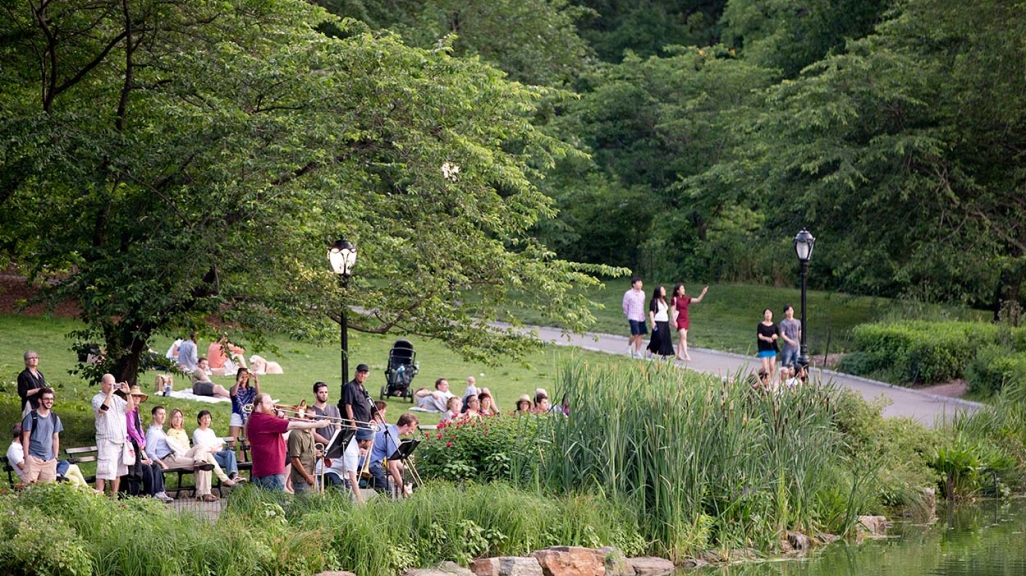 Music of the Americas: A Week of Recuerdos

Recuerdos takes us back to the 2012 concerts of Edmar Castañeda and the outdoor celebration of R. Murray Schafer in 2013.

Recuerdos takes us back to Edmar Castañeda's sold out run concerts in fall 2012. For each these three shows, Edmar's Trio were joined by guests, including vibraphonist Joe Locke, bandoneonist Héctor del Curto, flutist Itai Kriss, cuatro player Jorge Glem, and singer Andrea Tierra. This week we share two pieces from these performances.

Canadian composer R. Murray Schafer died last August at 88. He was one of his country's leading composers and a pioneer in acoustic ecology. In June 2013, in honor of his 80th birthday, we dedicated a whole day of concerts outdoors in Central Park to two of his works: Music for Wilderness Lake, for twelve trombones, and "Credo," the second part of Apocalypsis.

En Casa takes a break this week and will be back with a week of music from San Juan on October 18.

In November 2012, Music of the Americas presented three concerts featuring Colombian harpist Edmar Castañeda, his trio, and a stellar group of guests in a series that sought to expand upon musical collaborations that Castañeda had initiated in then-recent recordings.

Since his move to the United States from Bogotá in 1994, Castañeda has taken the world stage by storm with the sheer force of his virtuosic command of the harp—revolutionizing the way audiences and critics consider his instrument. On the first of the concerts, which took place on November 13, the trio was joined by bandoneonist Héctor del Curto (seen here in our En Casa series with his son Santiago) in a stirring rendition of Ástor Piazzolla's 1974 classic "Libertango."

On June 21, 2013, as part of Make Music New York, we presented three pieces by Canadian composer R. Murray Schafer, who was turning 80 a few weeks later. Music for Wilderness Lake, a piece of "environmental music" for 12 trombones, was written in 1979 to be played around a remote small lake in Ontario, and incorporates the sounds of wildlife into the piece. Three groups of trombones are placed around the lake and a conductor coordinates some moments using colorful flags.

The piece has two sections, Dawn and Dusk, which were performed at 7:30 a.m. (it was impossible to get into Central Park at 5 a.m.) and as the sun set around 8 p.m., respectively.

Castañeda's last concert, on November 26, 2012, featured special guest Jorge Glem, a virtuoso of the Venezuelan cuatro, who traveled from Caracas to join the trio in Edmar's "Entre cuerdas."

The concert with the Edmar Castañeda Trio and Friends was supported by Presenting Jazz, a program of Chamber Music America funded through the generosity of the Doris Duke Charitable Foundation. Jorge Glem's performance was made possible with support from the Venezuelan Sounds Foundation