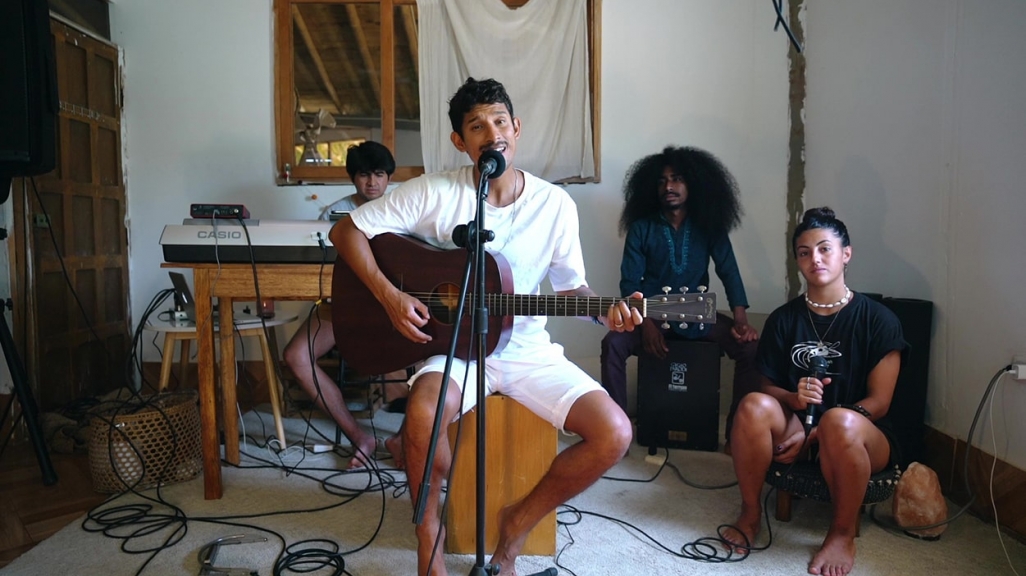 Andrés Wurst and his band. (Image via Americas Society video)

Young Italian guitarist Giuseppe Buscemi was featured in our Guitar Showcase back in May, and he is back with a new video recorded from home in Partinico, not far from Palermo, in Sicily.

Recuerdos is also back this week with a song from the show by Vin Gordon and the Original Wailers' Horn Section from a decade ago, where the Jamaican icon surveyed reggae hits old and new backed by a killer New York-based band.

En Casa regulars will remember the four-video set by the Brooklyn duo Tipa Tipo that we shared in June. Half of this duo is Peruvian musician Felipe Wurst and, apparently, music runs in the family, because his brother Andrés is an accomplished guitarist and composer of swinging equatorial surf pop.

Italian guitarist Giuseppe Buscemi studied at conservatories in Messina and Caltanisetta before pursuing a DMA at Manhattan School of Music, where he studies with David Starobin. He released his debut album, Come, Heavy Sleep in 2018 on DotGuitar. The album is entirely focused on twentieth century masterpieces by Frank Martin, Benjamin Britten, Manuel De Falla, and Joan Manén and received critical praise. Buscemi has performed in distinguished concert halls across Italy and toured the United States as the winner of the IBLA Grand Prize International Competition, including a recital at Carnegie Hall. Buscemi is the winner of several international guitar competitions.

He sent us his version of Sérgio Assad's "Farewell."

Vin Gordon is a prolific, internationally known trombone player who from Kingston. A member of the original horn section in the Wailers with Bob Marley, Gordon has collaborated with numerous major reggae stars internationally. He is recognized among Jamaican music lovers worldwide as a consummate musician, as well as a professional and top-notch trombonist.

Gordon's collaboration with trumpeter David Madden and saxophonist Glen Da Costa Their collaboration extends over four decades, starting at a time of change for Jamaica and the world. Out of the political and socio-economic unrest of the 1960s and 1970s, Jamaicans began to claim their unique cultural history and autonomy. These master hornsmen made their artistic contribution to that historic era, as Jamaica affirmed itself as an independent nation and carved out its own singular musical tradition: reggae. All three spent many years in the company of the late, great Bob Marley, as the horn section of the original Bob Marley and The Wailers group, placing them at the center of this sociocultural movement.

Gordon, DaCosta, and Madden played at Americas Society in 2011, backed by a band including Earl Appleton on keyboards, Andrew Bassford on guitar, Wayne Batchelor on bass, and Yao Dinizulu on drums.

From that concert, we share Coxsone Dodd's "Rain from the Sky."

Andrés Wurst is a Peruvian guitarist, composer (and world-class surfer) from Lima. He has released several EPs, singles, and albums starting in 2013, recorded in Lima and New York. Wurst's 2018 release, Ser tu, was inspired by the sounds of the ocean.

From Máncora, a small beach town in northern Peru, Wurst sent us four videos recorded with Jorge Alonso, Malen Gardenghi, and Alvaro Isla, which we will release during August.

Vin Gordon's concert was supported in part by the National Endowment for the Arts and the New York State Council for the Arts.