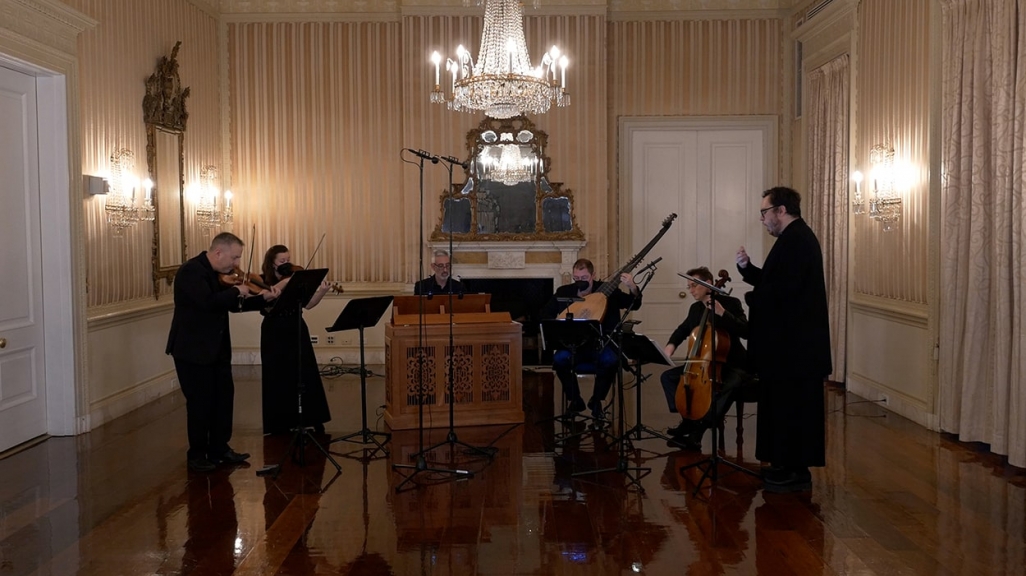 Music of the Americas: Early Music Old and New

This week includes the first concert of 2022, recorded in our hall in February, Recuerdos of early music performances from previous seasons, and a live new music concert by Ekmeles in New York.

This hybrid week includes the first virtual concert of 2022, with Canadian Indigenous baritone Jonathon Adams in baroque German repertoire and a live concert by vocal ensemble Ekmeles at the Church of St. Ignatius of Antioch in New York.

Recuerdos features a series of early Latin American choral music videos that we dug up from our archives for our friends of Voices of Ascension in 2021. The videos include Ars Longa de La Habana in their second New York performance in 2019, Bolivian ensemble Arakaendar conducted by Ashley Solomon, and one video of our own vocal ensemble, Meridionalis, in concert in New York with Clarion conducted by Steven Fox.

En Casa will be back in March.

This version of Domenico Zipoli's Te Deum laudamus was performed by Arakaendar Bolivia, led by British conductor Ashley Solomon, during a blizzard in March 2015 at the Hispanic Society in Upper Manhattan, during their debut U.S. tour. This group of young musicians from the Bolivian east worked with Solomon several times a year and regularly recorded and toured internationally, creating beautiful music and disseminating it over the world.

Composer Domenico Zipoli was born in the Tuscan city of Prato in 1688, where he had his early musical training. After organ studies in Florence with Giovani Maria Casini and in Naples with Alessandro Scarlatti, he settled in Rome in the early 1710s. Around 1715 he became the organist of the Church of the Gesù, the mother church of the Society of Jesus, and completed his best-known work, a collection of keyboard pieces titled Sonate d'intavolatura per organo e cimbalo, published in 1716. At this point, Zipoli seems to have vanished, and it was only during the twentieth century that his presence in South America was proposed (1941) and demonstrated (1962) by Uruguayan musicologist Lauro Ayestarán.

We now know that in 1716, Zipoli traveled to Seville, where he joined the Jesuits, and left Spain with a group of missionaries who reached Buenos Aires on July 13, 1717. He completed his religious studies in Córdoba, where he was music director at the Jesuit church and where he died in 1726. His works spread quickly throughout the region's missions. They are especially abundant in the Bolivian archives, which include two masses (both without Agnus Dei movements), psalm settings, hymns, this Te Deum laudamus, and other pieces.

This video is from a concert Meridionalis presented in collaboration with the Clarion Society in 2013. The piece is an anonymous responsorial prayer called Iesu dulcissime, conducted by Steven Fox, in which a soprano soloist (Estelí Gómez) and a three-part choir engage in a subtly shifting alternation. This concert was part of the GEMAS series, which is organized by Americas Society and Gotham Early Music Scene, and curated by Nell Snaidas and Music Director Sebastian Zubieta.

The Jesuit missions of present-day eastern Bolivia were particularly successful and are important for the baroque music in the continent because a large quantity of music survived to our day. The collections, currently preserved archives in Chiquitos and Moxos, are among the largest archives from the colonial period in America and include locally composed anonymous pieces as well as works by Domenico Zipoli, whose music is abundantly represented, and by other contemporary European composers.

Musicological work on the repertoire has been especially fruitful over the past 30 years following the virtually fortuitous discovery of the manuscripts in the 1980s. The Jesuits established and administered 10 highly successful missions from 1691 until their expulsion from Spain and all its colonies in 1767 in the area, called Chiquitos after one of the peoples that inhabited the region.

The idea of the usefulness of music for civilized life is as old as western culture itself and has a rich history. In the specific case of the Jesuits' missionary activity, contemporary references to its power converge around the way in which it made Catholicism more agreeable to the natives and the extraordinary facility and enthusiasm with which the neophytes embraced music making. At the same time, musical activity became a very powerful publicity tool for the Jesuits as they sustained their constant political fights with Spanish settlers, local governments, and other orders. Visits of mission ensembles to urban centers became the showcase for the extraordinary way in which the Jesuit project fulfilled its evangelical mandate.

After the Jesuits were expelled in 1767, the order itself was suppressed for over 40 years shortly afterward. The extrañamiento, as the process was called, was sudden, which meant that many things were left behind, including musical scores and instruments. While former Jesuit pueblos in other regions were largely abandoned soon after the expulsion and their territories became the setting for political and military conflict, Chiquitos remained relatively isolated and in many cases the populations remained in their former missions. The musical activity continued to grow and the music continued to be performed in what had become a local tradition for centuries.

Cuban ensemble Ars Longa de La Habana is one of the preeminent early music ensembles in Latin America, with a career spanning over 20 years of excellent and imaginative programming. They were part of our series in 2017 and 2018, with a third visit in 2020 postponed due to the pandemic. Their second tour took them to New York City, Dallas, Pittsburgh, and Westport, traveling with five singers, two violins, two oboes, and a continuo section of guitar, harp, and violone.

Their concert in New York was part of the GEMAS series. It took place at St. Paul’s Chapel at Columbia University, a beautiful hall for choral concerts. The concert concluded with Convidando está la noche (The Night Invites Us), by Mexican composer Juan García de Zéspedes (Puebla, ca.1619–1678). This one of just a handful of pieces by Zéspedes that have reached us, which is too bad because he was a wonderful composer with a great melodic and dramatic gift. He spent his career at different posts at the cathedral in Puebla, from choirboy to Kapellmeister, a position to which he was appointed in 1664 and held until his death. Convidando… is a mini-Christmas play in two distinctive sections, a lyrical one that sets the scene and tells us that a group of musicians will pay their respects to the newborn Christ dancing and singing a guaracha. The guaracha is a picaresque dance from Cuba, very popular in the Spanish baroque world, and this is its first known mention. The guaracha, like the chaconne and other dances, is built on a harmonic ostinato which, in Ars Longa's hands, turns the story's celebration into a dance party shared with the audience.

Live concert at the Church of St. Ignatius of Antioch in New York.

The new music vocal ensemble debuts on our stage with a cappella music by Mauricio Kagel, Tania León, Hilda Paredes, and Marc Sabat.