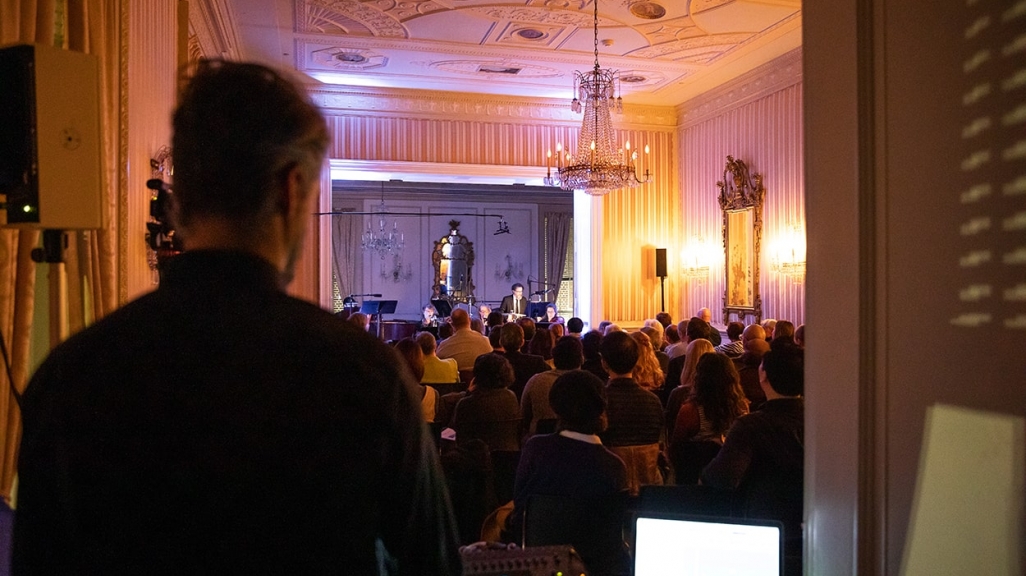 Music of the Americas: Contemporary and Baroque

We are back live with Talea Ensemble. Plus, En Casa takes us to Costa Rica and Recuerdos takes us back to the concert by Symphonie des Dragons.

Music of the Americas is live with a concert by Talea Ensemble. En Casa takes us to Costa Rica, and we share a French baroque Recuerdos video from a concert by Symphonie des Dragons in 2014.

Symphonie des Dragons explores the repertoire of the great wind bands of Versailles and brings together many of the finest wind players under the direction of Gonzalo X. Ruiz—the Boston Early Music Festival’s principal oboist, a professor at The Juilliard School, and one of the world’s most acclaimed practitioners of the instrument. Symphonie des Dragons' unique combination of oboes, bassoons, percussion, and guitar is dedicated to the revival of the rich repertoire of military and ceremonial music and dances of the French Golden Age and its influences on the rest of Europe. Every self-respecting court maintained an oboe band, even if just a modest one with as few as three players. At its largest, Symphonie des Dragons emulates the Grands Hautbois of the Versailles Court of Louis XIV with as many as 12 to 18 players.

They were on our stage in 2014 with a program of military and dance music.

Talea is back on our stage with "Encores," a program that celebrates some of the recent music they have commissioned and premiered. You can join us in person in New York by emailing gportale@as-coa.org. You can also watch the video of the concert later on this page.

Experienced in both popular and concert music, Alonso Torres performs, arranges, and composes in a wide range of music styles. His pieces have been performed and recorded by prestigious musicians in Costa Rica and Mexico, as well as at venues throughout the world. Torres has composed and produced music for films, theater plays, and the internet. He holds degrees in guitar performance, composition, and pedagogy from Universidad de Costa Rica. He has won twice the ACAM (Costa Rica's Music Composers and Authors Society) Prize for Best Incidental Music in 2014 and Best Instrumental Music in 2012. After teaching music theory and guitar at Universidad de Costa Rica, he is now pursuing doctoral studies in composition at Universidade de Aveiro in Portugal.

Lenín Izaguirre studied at Universidad de Costa Rica. He is the ambassador of the brand Esencial Costa Rica, as well as an artist representative for Buffet Crampon clarinets, Julius Keilwerth Saxophones, Vandoren Paris reeds, Musical Solutions, and Cardoso & Conseçao. He is the founder and producer of the International Clarinet Festival of Costa Rica and the “José Manuel Ugalde Quirós” International Clarinet Competition. As a teacher and soloist, he has performed around the world. He studied clarinet at the Simón Bolívar Conservatory and at the Latin American Clarinet Academy, as well as at the University Institute of Musical Studies. He is currently a professor at the National Institute of Music and the Municipal School of Music of Tres Ríos. He is also the clarinetist of the Heredia Concert Band, a founding member of the Costa Rican Clarinet Quartet, and a representative of Costa Rica before the International Clarinet Association.

from San José, the duo sent us "Añoranza," a bolero that started as a solo guitar piece and was then transformed into a piece for clarinet and strings, and into the current version for clarinet and guitar. Torres says that "It is inspired by the sweet nostalgia that overtakes us when we anticipate the return of someone or someone we love very much, anticipating the sweetness of the reunion."

Additional support provided by The Augustine Foundation, the Alice M. Ditson Fund of Columbia University, The Aaron Copland Fund for Music, and The Amphion Foundation, Inc.