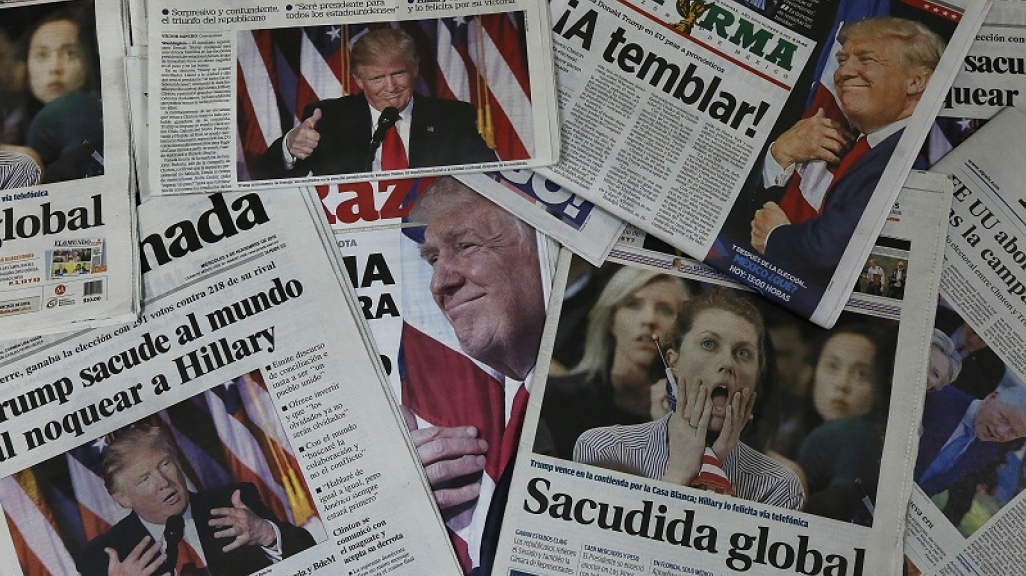 Donald Trump was not expected to win the U.S. election on November 8, but leaders from across the Americas were quick to respond to the news. Here’s a selection of their reactions, from Ottawa to Buenos Aires.

Updated, November 10 — Donald Trump was not expected to win the U.S. election on November 8, but leaders from across the Americas were quick to respond to the news. Here’s a selection of their reactions, from Ottawa to Buenos Aires.

Mexico: All eyes on the peso

The Mexican peso, which many observers saw as an indicator of the vote’s outcome in recent weeks, took a tumble during the evening of the election. The currency’s value fell 13 percent, marking its steepest decline in more than 20 years, before stabilizing to trade down at 7.9 percent as of mid-afternoon on November 9.

Mexico’s Finance Secretary José Antonio Meade and Central Bank head Agustín Carstens held an emergency press conference at 7 a.m. on November 9 to emphasize the country’s macroeconomic stability. “The state of our public finances and the strength of our public and private institutions allow us to avoid premature reactions to facts yet unknown,” said Meade. Although they did not share details, Carstens indicated prior to the election that Mexico would be working on a contingency plan in the case of an “adverse” electoral result.

For his part, President Enrique Peña Nieto congratulated the United States for its electoral process and said he is ready to work with the U.S. president-elect to strengthen bilateral ties.

Foreign Relations Secretary Claudia Ruiz Massieu repeated Wednesday that Mexico will not pay for a border wall, a cornerstone of Trump’s campaign platform, and that Mexico’s vision instead is one of even deeper commercial integration.

Mexico holds its own presidential election in 2018, and former First Lady Margarita Zavala, one of the poll leaders, called for Mexico to take leadership in ties with the United States, adding that: “There is no issue in the bilateral relationship that the United States can take on alone, whether it be migration, security, or climate change.” Meanwhile, ex-Mayor of Mexico City Andrés Manuel López Obrador, also considered a leading presidential contender, encouraged his countrymen to stay calm, saying Mexico “is a free, sovereign country…that doesn’t depend on any foreign government.”

But others were not so optimistic. Former Mexican Foreign Relations Secretary Jorge Castañeda described the outcome as “a disaster for the United States, for the world, and for Mexico.”

Prime Minister Justin Trudeau of Canada, the United States’ top trade partner, responded by commenting on the “shared values” held by both countries, saying, “We offer our hand in partnership with our neighbors as friends and allies as they move forward.”

An op-ed in The Toronto Star indicated that Trudeau will likely invite Trump to make Canada his first foreign stop as president. And, with Trump’s having made vocal criticisms of the North American Free Trade Agreement over the course of the election, the Canada’s Ambassador to the U.S. David MacNaughton said that, while Ottawa believes the trade deal’s been beneficial for North America, it’s willing to discuss renegotiations. “Everything can be improved,” said MacNaughton on Wednesday.

Cuba’s government was late to comment on the electoral outcome, but on Wednesday night Raúl Castro sent the U.S. president-elect a congratulatory message, according to Cuba's foreign ministry.

The state’s TV also featured the election news, seen here in a photo of a TV screen taken by  Cuban journalist and founder of 14ymedio.com, Yoani Sanchez.

But it was the front page of the state newspaper, Granma, that stirred discussion: an announcement that the government would launch military exercises, known as the Strategic Exercise Bastión 2016, from November 16 to 20 “in preparation to confront different enemy actions.” While it was not linked to Trump’s victory, it’s raising concerns for those familiar with Cuba’s history issuing such military exercises in response to U.S. tensions, as was the case after Reagan’s election.

Trump has changed his views on Cuba policy, but his most recent stance involved reversing Barack Obama’s executive orders until the island democratized. Former Cuban diplomat Carlos Alzugaray said that the Trump win could mean a victory for both Cuban-Americans and hardliners on the island who oppose new relations.

President Michel Temer said Trump’s victory “doesn’t change [the relationship between the two countries] in any way.” He complimented Trump on his conciliatory tone during his acceptance speech and sent a letter inviting the president-elect to work together in strengthening U.S. Brazil ties.

When asked about the possible effects of the U.S. election on Brazil’s economy, Finance Minister Henrique Meirelles said Brazil is prepared to deal with market volatilities after Trump’s victory. The country’s stock market reacted negatively to the elections result at first, with Ibovespa opening down 2.3 percent, but it recovered once New York markets showed less distress than expected.

Brazil’s own recent local election results indicated a questioning of the status quo, and Donald Trump’s win drew questions about what’s ahead for Brazil’s presidential race in 2018. Conservative potential presidential candidate Jair Bolsonaro was one of Brazil’s first political figures in the country to congratulate Trump via Twitter, saying the winner fought against “everything and everyone” and that the same will happen in Brazil in 2018.

But doubts remain about what Trump’s campaign promises mean in terms of policy. Columbia University’s BRICLab’s Marcos Troyjo said Trump represents “the end of the world as we know it,” bringing a “de-globalizing” effect in terms of the new way the United States will relate with the rest of the world.

Colombian President Juan Manuel Santos, who’s banking on hundreds of millions of U.S. aid dollars to fund the peace process and reconstruction efforts with guerrillas, took a diplomatic tone, tweeting: “We celebrate the United States’ democratic spirit on #ElectionNight. We’ll continue to deepen the bilateral relation with @realDonaldTrump,” with an accompanying meme that congratulated Trump on the win.

His political rival, former President Álvaro Uribe, whose seen his star rise in recent weeks after leading a successful No vote against a peace deal with the guerrillas, had a policy message for the U.S. president-elect: “Congratulations President Trump; narcoterrorism in Colombia and tyranny in Venezuela are the great enemies of our democracy.”

Envying the electoral process from Venezuela

The Office of the Presidency of Venezuela’s Nicolás Maduro released a statement early Wednesday afternoon that congratulated Trump and advocated for a respect for state sovereignty and self-determination. Maduro voiced support for Bernie Sanders’ candidacy earlier in the year and, in August, shot down comparisons between himself and the new U.S. president elect.

Among Venezuelan opposition leaders, whose recall vote against Maduro the government recently quashed, National Assembly Speaker Henry Ramos Allup tweeted, “I’m being asked what I think of Trump’s win: the North American people freely elected the president they wanted and that must be respected.”

Observations from the Andes

Farther south, Bolivian President Evo Morales said: “Here’s to @realDonaldTrump’s win. We hope to work against racism, machismo, and anti-immigration for the sovereignty of our peoples.”

In Chile, President Michelle Bachelet, a friend of Hillary Clinton's and former director of UN Women, barely mentioned Trump's victory at a public appearance in Santiago on Wednesday, saying that she hoped the two countries could continue to collaborate. Foreign Minister Heraldo Muñoz, meanwhile, said he had not called Trump to congratulate him because the two did not know each other well, but that his office would be sending a formal letter of protocol shortly.

Early Wednesday morning, Argentine President Mauricio Macri congratulated Trump on his victory and said: “I hope that we can work together for the good of our countries.”

Argentina’s government previously voiced a preference for a Clinton presidency. But on November 9, Foreign Affairs Minister Susana Malcorra reiterated that her country would work with any U.S. administration, saying, “We can’t think of inserting ourselves in the world without having U.S. ties.”