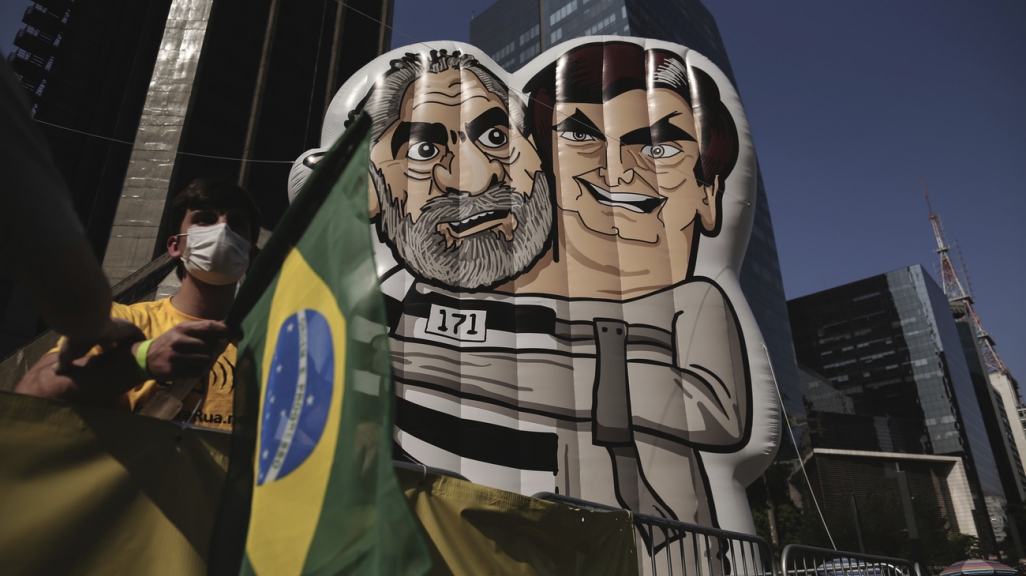 A protest in São Paulo. (AP)

LatAm in Focus: What to Expect When Expecting the Brazilian Elections

A year out from the presidential vote, IDEIA Big Data’s Mauricio Moura covers how the president’s approval, Covid-19, and technology are shaping what’s to come.

Brazil’s 2022 general elections are one year away, and the eyes of pollsters have turned to incumbent President Jair Bolsonaro’s approval ratings for indications of his reelection prospects. A July IDEIA/Exame poll shows 20 percent of Brazilians back him while 51 percent disapprove of how he’s running the country. Those numbers represent a tumble since the beginning of the year, when the same pollsters found Bolsonaro’s approval stood at 37 percent.

This languishing support is linked to several problems for the controversial leader. One major issue involves concerns that the president, a vaccine skeptic, failed to contain the pandemic, leading Brazil to have the world’s second-highest coronavirus death toll. But, as CEO and founder of IDEIA Big Data Dr. Mauricio Moura,  explains, the economy is an even bigger Achilles’ heel for Bolsonaro, as voters will lay blame at his government’s feet for economic woes to an even greater degree than is the case with a global pandemic. Already, explains Moura, Bolsonaro has lower approval than his predecessors did at this point in their presidencies. That could spell a tough road ahead for the incumbent.

But much can still happen, given that no candidates other than former President Luiz Inácio Lula da Silva are confirmed to be running, and Brazilians are showing little interest in political participation. “Half of the country, when you ask, without showing any options, ‘Who are you going to vote for for president if the elections happen today?’ say ‘I don’t know,’” says Moura, who also serves on the Board of Advisors at George Washington University’s Graduate School of Political Management. He tells AS/COA Online’s Luisa Leme about the demographic profile of those who still back the president, why Minas Gerais is Brazil’s Ohio-like swing state, and how political polarization could drive down voter turnout—particularly as the country’s electoral tribunal created a new mobile app that makes it easier for voters to justify their abstention in the mandatory electoral system. “The critical component to understanding the election is actually who is going to show up to vote,” says Moura, who draws comparisons with the U.S. elections and then-candidate Joe Biden's campaign to get out the vote last year.

“If the choice will be between Bolsonaro and Lula, the critical component to understand the election is actually who is going to show up to vote.”

This apathy and Bolsonaro’s disapproval levels would give Lula an advantage if elections happened today, says Moura. In a June IDEIA/Exame poll of June this year, Lula had 44 percent against 39 percent for Bolsonaro. But even if Bolsonaro can improve the country’s prospects on the issues that matter to voters before the October 2022 vote rolls around, the former president would have to deal with his own “anti-voters” showing up, says Moura—an issue that cost the Workers Party a win in the 2018 elections.

Have Brazilians Given Up on Bolsonaro?

The sinking approval ratings for Brazil’s president could be permanent, writes AQ’s editor-in-chief.

Still, surprises await. Moura is paying attention to how political parties might merge in this next year, leading to a compounding of resources and an increase in control of the campaign process, as well as more seats in Congress. All these political moves come as Bolsonaro himself does not have an official party affiliation yet.