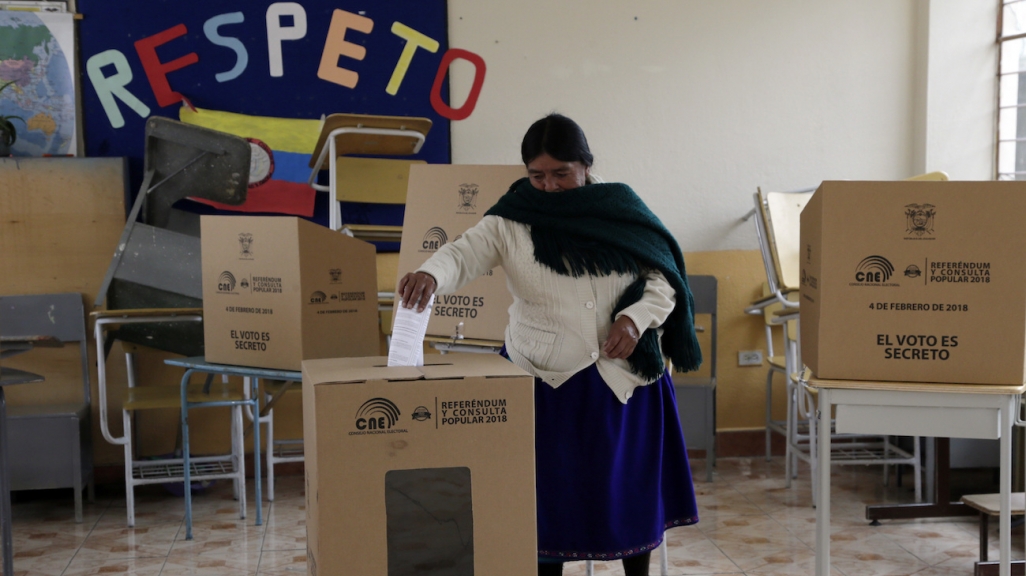 A woman votes in Ecuador. (AP)

LatAm in Focus: Voter Fatigue in Ecuador and Peru

In both countries, which hold elections on April 11, voters are divided and largely unenthused by traditional politics—but have few alternatives.

There’s been a fear that worsening inequality amid the pandemic would fuel populism in Latin America. But, in many cases, voters may just be looking for pragmatism.

Let’s take Andean neighbors Ecuador and Peru, which both hold elections on April 11. Without a singular political star to galvanize popular support this time around, many voters are tired of the traditional options—even if that’s still what they’ll face at the ballot box. Ecuadorans will vote in their presidential runoff, while Peruvians will hold general elections for presidential tickets and all members of Congress.

Fearful of ideological extremes, many Peruvian voters are looking for candidates “who will make their government, their state work properly,” says Peruvian legal expert Alonso Gurmendi of the Universidad del Pacífico in Lima and a PhD candidate at the University College London’s Faculty of Laws. Specifically, they want crime to go back down, the pandemic to get under control, and maybe just one leader who doesn’t get caught up in a scandal or criminal investigation—as seems to be the ignominious tradition.

Still, the winner of this or the June runoff will face obstacles to changing the country’s persistent governability problems, given that so many of the same structures exist, says Gurmendi in this conversation with AS/COA Online’s Holly K. Sonneland. What would the constitutional expert change with the wave of a wand if he could? The ability of Peru’s legislature and executive to dissolve and remove so easily, as was evidenced by presidential handovers and congressional standoffs that marked the past five years. “Politics needs to be a little bit more stable,” he says.

“There's a big pocket of voters hoping for someone who is able to be a little bit more pragmatic.” —Alonso Gurmendi

Farther north, the two candidates in Ecuador’s presidential runoff represent a long-standing gulf in national politics, says the University of British Columbia's Dr. Grace Jaramillo, a postdoctoral fellow, in a segment with AS/COA Online’s Chase Harrison. Frontrunner Andrés Arauz represents a state-driven redistributionist movement started by former president Rafael Correa (2007–2017), while businessman Guillermo Lasso represents the economic elite and a vision that the private sector should be driving economic development. Economic differences aside, “both are social and cultural conservatives” she notes, presenting a challenge for the rivals to win the support of the women, indigenous, and young voters who backed third-party candidates in the first round. Jaramillo says many of these Ecuadorans consider the runoff’s final two choices “a farce,” and may register null or blank ballots in protest.

Moreover, the pandemic has changed the nature of campaigning. “It used to be an on-the-ground exercise of organization, canvassing, and big rallies across the country,” says Jaramillo. Now, social media apps like TikTok and television are the predominant tools for candidates to reach voters. No matter who wins the election, he will face what Jaramillo called a “difficult” Congress. No party has a majority and she predicts that the legislature “will be divided and be bickering for every piece of legislation.”

“TikTok has become the best way of advertising and managing the appeal, especially to young people.” —Dr. Grace Jaramillo