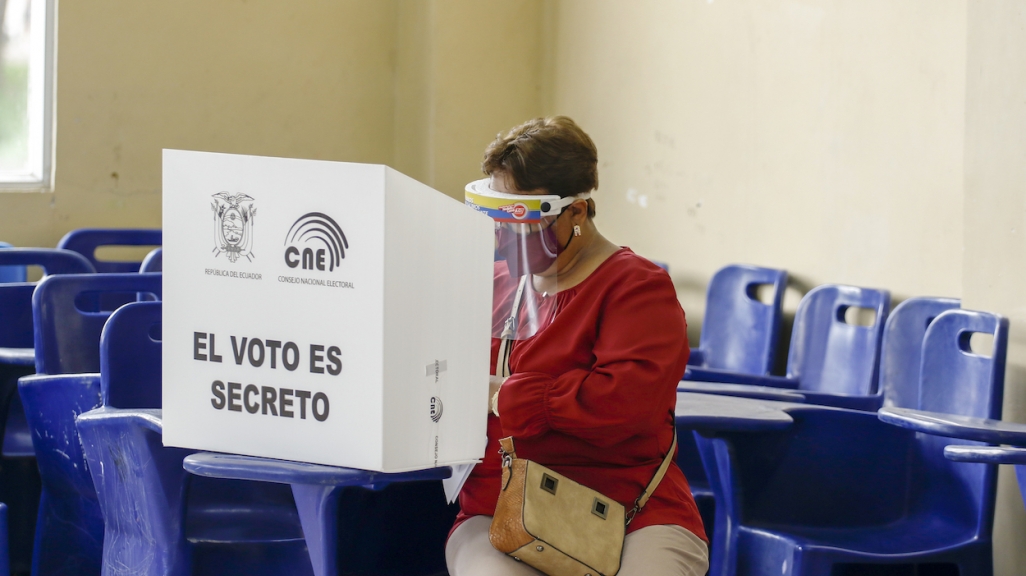 Updated April 7, 2021— On April 11, Ecuadorans return to the polls for the second round of the presidential election. In the first round, no candidate reached the threshold necessary to win outright, which is 40 percent plus 10 percent ahead of the nearest rival. Andrés Arauz at 32.7 percent and Guillermo Lasso at 19.7 percent were the top vote-getters. Now, the two face each other in the runoff. Here’s five things to know.

1. A lot of voters want to move beyond the correísmo divide

Former President Rafael Correa’s (2007–2017) philosophy of correísmo—a political movement characterized by state-led development projects and social spending funded largely by commodities exports—has long divided Ecuadoran politics. A former minister of Correa, Arauz, 36, is running with the former president's endorsement as the candidate of the Union for Hope (UNES) on a promise of restoring correísmo to the country. Arauz wants to reverse the policies of current President Lenín Moreno, who was elected in 2017 as a former vice president of Correa’s but who ended up shifting course during his term by pursuing policies that were more friendly to international investors, such as austerity and seeking loans from the International Monetary Fund (IMF). Meanwhile, Lasso, 65, is a vocal critic of correísmo and wants to continue Ecuador’s loan program with the IMF, provide funding to the National Development Bank, and reform the healthcare system. He further pledges to create 1 million jobs through tax incentives and minimum wage reform, among other measures.

Yaku Pérez of the indigenous Pachakutik party placed third with 19.4 percent, losing to Lasso by just 32,115 votes out of more than 10 million cast. In fourth was Xavier Hervas of the Democratic Left party with 15.7 percent. Their first-round successes showed that candidates with ideas outside of the correísmo divide were able to attract significant support. Hervas endorsed Lasso on March 23, while Pérez says he will not endorse either candidate.

Since narrowly missing the runoff, Pérez has led protests against Ecuador’s electoral authorities, the TCE and the CNE, for what he claims are inconsistencies in the vote. On March 14, the TCE denied Pérez’s appeal, effectively ending his petition for a recount. Now, Pérez and CONAIE, Ecuador’s largest indigenous organization, are encouraging supporters to register null ballots in the runoff as a protest over the alleged electoral fraud. Still, several leaders within CONAIE, namely the organization’s president Jamie Vargas, have disagreed with the call for a null vote and instead personally endorsed Arauz. If the total number of null ballots exceeds the total of the two candidates, the entire election is voided under Ecuadoran law. A March EurekNow poll shows that about 12.4 percent of all first-round voters plan to cast null or blank ballots in protest.

3. Candidates are reaching out to women and young voters

In the February 7 first-round vote, Arauz and Lasso stuck with talking points around correísmo. Now, as they attempt to expand their support, they may need a new approach, and both are working to reach out to women and young voters in particular.

Young voters, who make up nearly 30 percent of the electorate, report issues like unemployment and cuts to funding for public universities among their top concerns. They also are more likely to consider candidates’ stances on social issues like race, gender, and LGBTQ rights.

Both candidates are also working to win over women. Ecuadoran women have been disproportionately impacted by the pandemic, exacerbating existing gender inequality. Citing a 66-percent increase in femicides from 2019 to 2020, activist groups are also pushing for the government to do more to combat the trend. For his part, Lasso is meeting with feminist groups and released new policies aimed at promoting gender equality, such a new ombudsman office for women. Arauz continues to trumpet a plan to provide $1,000 checks to 1 million mothers and met with women’s rights groups on International Women’s Day.

Ecuadorians will face starkly different options when they vote for president in February.

Of Ecuador’s roughly 17 million citizens, more than 14 million have either a Facebook or Instagram account, and the country also has 2.3 million TikTok users. Hervas was known for his campaign TikTok account, and Lasso later hired Hervas’ campaign manager to help him manage his social media outreach. Lasso has at least twice as many followers on each of the major social networks (Facebook, Twitter, Instagram, and TikTok) as his rival. Arauz has the organizing advantage offline though UNES' substantial territorial organization, while CREO lacks a robust ground campaign and underperformed its presidential candidate in the general elections. So far, both Lasso and Arauz are using online meetings to do live nightly broadcasts and outreach with local leaders.

5. No matter who wins, the National Assembly will be split

Although the presidential race will head to a runoff, the February 7 general elections determined the composition of the 137-member National Assembly. No party achieved the 69 seats needed for a majority. There are four parties that earned more than 14 seats, the amount required to be considered a legislative bench, which grants representation on the assembly’s Administrative Council and leadership opportunities in committees. UNES will have the most seats with 49. Pachakutik won 27 seats, a 23-seat increase from the previous session. The Democratic Left and the Social Christian Party (PCR) constitute the other benches with 19 seats apiece. The PCR is in a coalition with CREO, which captured 12 seats.

Twelve parties represented in the previous assembly failed to win any seats in the incoming session. This includes PAIS Alliance, Moreno’s party, which lost all of its 74 seats. The new assembly will take office May 14.