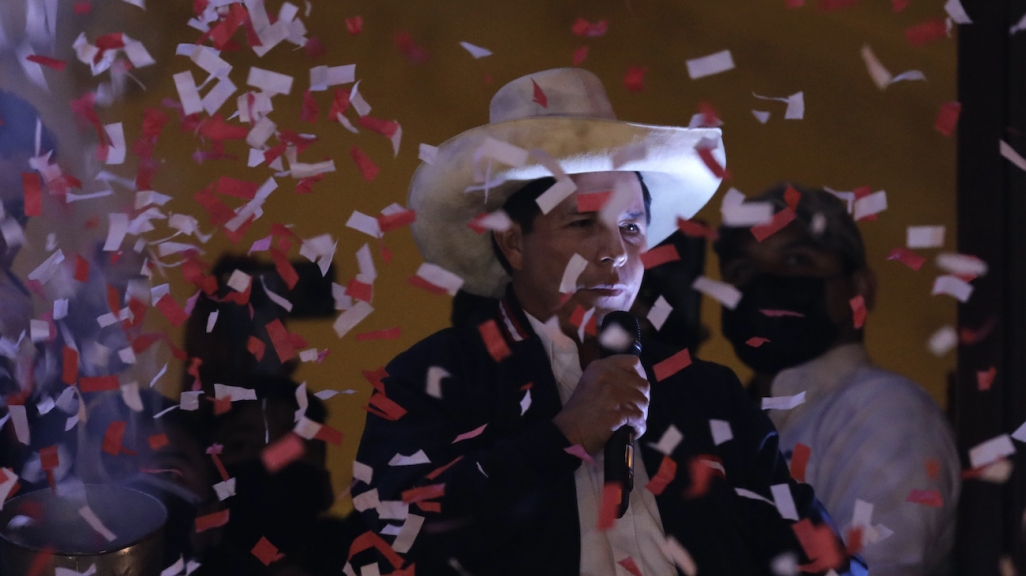 Forty-three days after a vote, at 10:30 pm on July 19, Peru’s national electoral body officially declared Pedro Castillo the winner of the presidential runoff. His rival, Keiko Fujimori—whose allegations of fraud delayed the certification—finally conceded and begrudgingly recognized the results. The United States and the EU, along with over a dozen electoral missions have said the voting was fair, with the State Department calling the election a “model of democracy.”

While having the win certified resolves one uncertainty, it opens up a host of others—especially for investors. Markets see-sawed during much of the campaign as Castillo would mention nationalizing key Peruvian industries, only to backtrack. “He’s been ambiguous or inconsistent enough about it … that he’s not really going to be tied down to any particular promise and might have some leeway for doing something much more moderate, which appears to be maybe the direction he’s going in,” says Peru-based journalist Mitra Taj, on the prospect of nationalizations. With the inauguration on July 28, which will also be the day of Peru’s bicentennial celebration, the president-elect has a short window to name his cabinet and key posts.

“We don’t know what shade of left this government’s going to be.” —Mitra Taj

Castillo faces a daunting scenario in Congress, too, where he is likely to feel pressure from all sides. Although his Free Peru party will be the largest in Peru’s unicameral legislature with 37 of 130 seats, the incoming 10-party Congress will tilt right and be tough to corral. Even legislators from his own party are seen as being more loyal to the party leader, Vladimir Cerrón, who leans farther left than Castillo. On top of that, Peru’s executive and legislature were in a fierce deadlock during the last five years, with Congress forcing out two presidents, and the president once dissolving the body—all per Peru’s Constitution, but disruptive nonetheless.

“I think it's going to be a battle between who can get rid of the other one first: Congress or the president,” says Peruvian legal expert Alonso Gurmendi of Lima’s Universidad del Pacífico.

More broadly, though, Castillo’s win has put a spotlight on Peru’s centuries’ old divide between the elite in Lima and the rest of the country, but particularly poorer, darker, and more rural Peruvians, who turned out to vote for Castillo. A 51-year-old school teacher and union leader from Peru’s northern Cajamarca region, Castillo is an outsider to the Lima-centered establishment. These are the divisions some are keen to capitalize on as a way to draw and gain a political edge. “The right is … pushing Castillo toward a confrontational starting position,” says Gurmendi. “I am very scared of drawing lines on ethnic backgrounds.”

The guests agree that Castillo’s best strategy is to focus on pragmatism and building consensus. Tangible accomplishments aside, the president-elect, by simple representation in Peru’s highest office, stands to change the face of the country’s politics. Says Gurmendi: “Castillo has a unique opportunity right now to change the way in which the left is seen.”