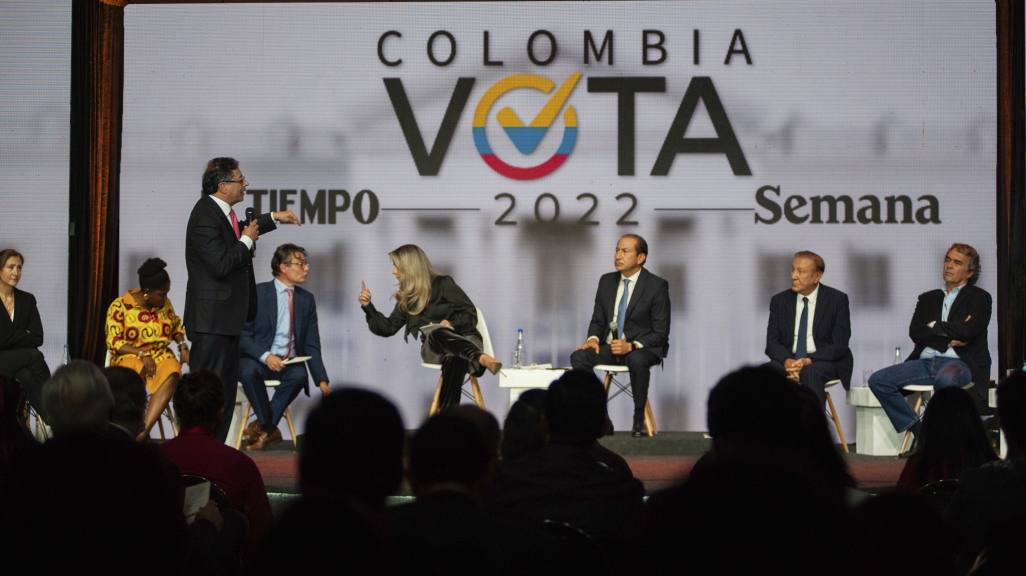 Gustavo Petro, standing, speaks at a debate in Bogotá. (AP)

LatAm in Focus: The Elections of Colombia’s Discontent

In the spring of 2021 and just over a year into the pandemic, Colombians took to the streets to vent pent-up frustrations. What was behind the unrest? “This whole cocktail of global economic decline, poor government, plus Covid, put an end to this growth [from the past decade], and people are very unsatisfied with inequality, with the corruption, with the lack of providing basic services,” Muni Jensen, a political analyst and senior advisor with the Albright Stonebridge Group, tells AS/COA Online’s Holly K. Sonneland. While the protests have since subsided, the discontent continues to simmer as the country heads into a big electoral season.

The country’s 2022 presidential votes officially take place May 29 with a potential June runoff, but a vote two months earlier could be more decisive: the March 13 interparty consultations, which will function like primaries and winnow the field. Four years ago, there were only two consultations: one for candidates on the right and another for those on the left. This year there are three: one for candidates on the left, a second for those on the center-left, and a third for those in the center-right. The expansive field—and the inability of parties and coalitions to concentrate momentum in any one direction—is disconcerting for observers of Colombia’s institutional political tradition. “There is the concern that this new society … is actually rejecting the traditional institutions and democracy itself,” says Jensen.

“The makeup of cabinets has to change and include new faces.”

Will the country change political course? Ahead of the May 29 first round, we look at the top presidential candidates.

And yet, Jensen, a former Colombian diplomat, also points to particular strengths of Colombian democracy that can serve as a ballast to help the country weather potential uncertain seas ahead. The country has a strong mayoral system and legislature to serve as checks on the executive and Colombian politicians, she says, are generally talented with solid track records. There’s more plurality in discussions these days, and a younger generation is coming into politics with fresh ideas. “I'm very optimistic to see this group of [candidates] where most people could vote for … most of them with a high level of confidence.”

Of course, the elephant in the room is Gustavo Petro, a former guerrilla who became Bogotá mayor and later a senator. He’s currently leading polls, and taking up much of the oxygen in the traditional media and on social media. Regarding him, Jensen says there are two lines of thinking. “There are those who believe that a left-wing government would be the end of the world, that the Congress would be dissolved, the dictator would be imposed” on the one hand, she says, while “others believe that Colombian institutions, coupled with strong regional governments … does make the country less vulnerable for any potentially disruptive government,” she says, concluding: “And the truth is somewhere probably between these two.”

New to the podcast? Check out past episodes of Latin America in Focus and subscribe on Amazon Music, Apple Podcasts, Google Podcasts, SoundCloud, Spotify, and Stitcher.

The song heard in this episode is “Las Horas” by the Colombian trio Trip Trip Trip, who joined Americas Society for our En Casa series last year. Check out more performances at musicoftheamericas.org.