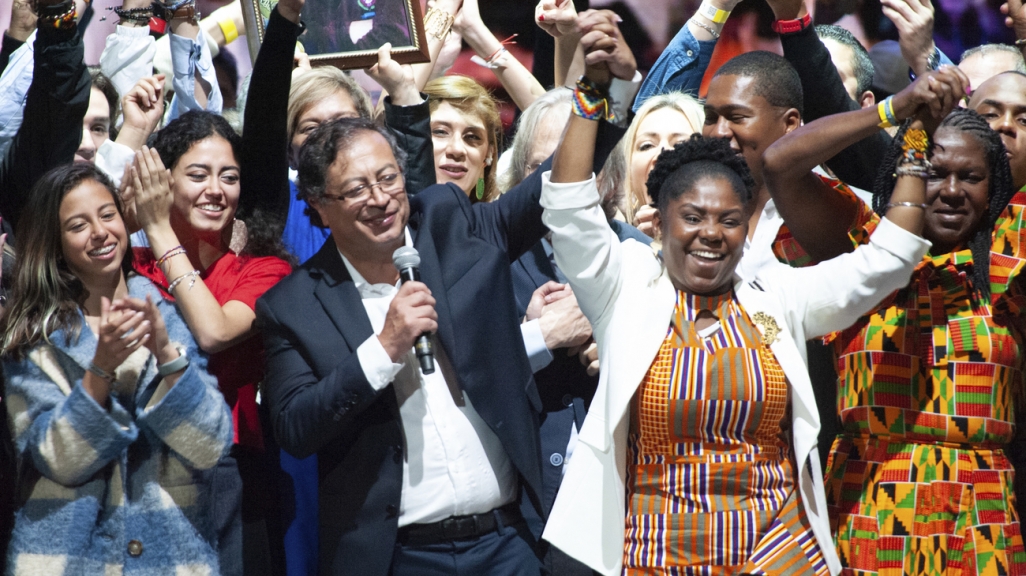 Expectations for the victor Challenges ahead

The former Bogotá mayor rode a wave of discontent to become the first leftist elected to the presidency.

It was a long road to Colombia’s presidential runoff vote, but in the end the longtime frontrunner won the race. Ex-Mayor of Bogotá and former guerrillero Gustavo Petro garnered 50.4 percent of the vote to beat anti-corruption outsider Rodolfo Hernández’s 47.3 percent. About 2.2 percent of voters submitted blank votes. At 58.1 percent, the turnout rate was the highest for the country in a presidential competition in nearly a quarter-century.

“First is peace, second is social justice, third is environmental justice,” Petro said in his victory speech, outlining what he said will be the main tenets of his presidency. “We are going to develop capitalism in Colombia, not because we worship it, but because we must first overcome pre-modernity feudalism.”

Heading into the election, observers feared that either runoff candidate would contest the election and cast doubt on the electoral process in the case of a close result. Instead, Election Day went smoothly and Hernández, who will automatically be a senator as runner-up, said in his concession speech that he accepted defeat as a necessary step to maintain the strength of Colombia’s institutions. Hernández—an engineer, real estate tycoon, and anti-establishment crusader—surprised many by making it into the second round, partially due to his limited political experience. On the evening of the election, he told supporters: “I sincerely hope that this decision that [the electorate] has made will be beneficial for everyone and that Colombia heads toward the change that prevailed in the first round.”

Expectations for the victor

With the question resolved of who will be the next president, new ones surround how Petro will govern. For one, Petro’s win raises doubts about the fate of Colombia’s historically solid relationship with the United States. The president-elect’s criticism of security policy related to the war on drugs, his plans to renegotiate the U.S.-Colombia Trade Agreement, and his talk of restoring relations with Nicolás Maduro’s undemocratic regime in Venezuela could stir up drama with Washington.

Further, his redistributive economic ideas—including a proposed land reform, a tax on the 4,000 richest Colombians, and free higher education—will be a break from the policies of administrations past. He plans to halt oil exploration and open-pit mining in a country where oil and coal make up more than 40 percent of exports. While such changes are popular amongst his supporters, critics point out that Petro’s proposed policies might not be financially feasible.

See how the matchup between Gustavo Petro and Rodolfo Hernández is shaping up ahead of the June 19 vote.

Petro rode a wave of discontent to get where he is today. Per a May 2022 Gallup poll, 75 percent of Colombians said their country was headed in the wrong direction. Inequality, increasing poverty, violence, insecurity, and other issues brought wide-scale protests to the streets in recent years, and clashes with security forces left dozens dead. Petro campaigned on a call to answer those protestors and their concerns, but, having won by a narrow margin, he will also have to govern for his opponents as well.

Congress is one place Petro will have to find allies among his electoral opponents. His coalition, the Historic Pact, only controls 15 percent of seats, meaning his allies will need to work with more conservative forces to usher through legislative changes.

Further, there is the immediate question of who will be in Petro’s cabinet. In an interview with BluRadio on June 16, the future president listed a few potential members, including Alejandro Gaviria, a centrist, and Rudolf Hommes, who was the country’s finance minister from 1990–1994. Petro is also considering his former finance chief while he was Bogotá’s mayor, Ricardo Bonilla, and ex-Agriculture and Environment Minister Cecilia López.

Elsewhere in the cabinet, Vice President-elect Márquez, a former domestic worker and award-winning environmental activist, will lead the new Ministry of Equality. Petro has also hinted that his defense minister will be a woman.