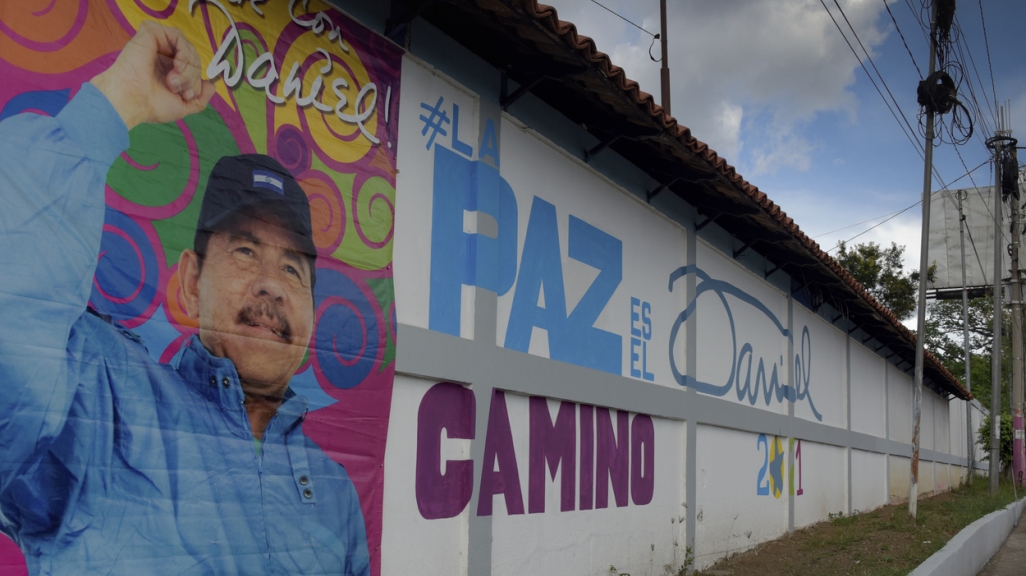 A mural of President Ortega (AP)

Nicaraguans head to polls on November 7, but a fifth presidential term for Daniel Ortega seems like a foregone conclusion. Over the past few months, Ortega and his allies have clamped down on political dissent, namely by arresting or exiling prominent opposition figures. With most of the other presidential candidates in jail, Ortega and Vice President Rosario Murillo, who is also his wife, will try to beat the 72 percent of the vote they were said to have received in the prior presidential election in 2016—despite Ortega’s 30 percent approval rating.

Nicaragua has a single-round, plurality election where a 35 percent minimum is required to win. Voting is not mandatory. Nicaraguans will also elect the entire 92-seat National Assembly and members of the Central American Parliament. It is expected that Ortega’s Sandinista National Liberation Front (FSLN) will dominate across the board. All will be elected to five-year terms.

AS/COA covers what you need to know ahead of what the Organization of American States (OAS) Secretary General Luis Almagro called “the worst possible election.”

In 1990 following his first term, Ortega lost reelection to a unified opposition alliance headed by Violeta Chamorro. Three decades later, he’s not taking any chances for another surprise loss. As such, over the past year, Ortega and his allies have made it nearly impossible for the opposition to contest the election.

Up until mid-2019, Ortega had been in a dialogue with the Civic Alliance, a collection of opposition groups. But by later that year, his regime took steps to chill the environment for dissent, at a time when the opposition itself was struggling with internal conflicts. In December 2020, the National Assembly passed laws that expanded its ability to accuse political actors of treason. It also extended the amount of time one could be arrested and held without trial from two to 90 days.

At the start of 2021, Ortega and his allies named a new Supreme Electoral Council (CSE), comprising seven magistrates and three substitutes, all of whom are Ortega-aligned. The new CSE pushed up coalition registration deadlines, creating chaos in the opposition’s internal brokering process. Then, the council rejected the registration of the party the opposition planned on using as its electoral vehicle.

While the opposition was still devising a strategy, authorities made a number of high-profile arrests of critics of the Ortega regime. From May to July, the police raided homes, newsrooms, and offices without warrants, of individuals the government alleged had violated Nicaragua’s treason laws. The police put numerous opposition politicians, journalists, and activists in jail or under house arrest. This included seven presidential contenders, including Cristina Chamorro and Juan Sebastián Chamorro, the children of former president.

In all, there are over 150 political prisoners in Nicaragua, according to Confidencial. Furthermore, prominent voices, like novelist Sergio Ramírez or journalist Carlos Fernando Chamorro Barrios, are currently in exile in Costa Rica.

Reforms and a fractured opposition only make it easier for Daniel Ortega to secure a fifth term as president in November.

2. Still, Ortega won’t be the only one on the ballot.

While many of the most prominent opposition candidates have been arrested or exiled, there are six parties aside from the FSLN that are formally registered in the election: the Constitutionalist Liberal Party (PLC), the Independent Liberal Party (PLI), the Nicaraguan Liberal Alliance (ALN), the Nicaraguan Christian Path (CCN), the Alliance for the Republic (Apre), and Yapti Tasba Masraka Nanih Aslatakanka (Yatama). The first five of these parties are small, right-wing parties, while Yatama is an indigenous party based on Nicaragua’s Atlantic coast. Of the six, the PLC has the largest presence in the National Assembly, with 14 of the 92 seats.

It is unlikely that any of these parties will achieve a strong share of the vote. Many opposition figures are suspicious as to what these parties do to be permissible political actors to the FSLN. “They are practically satellites of the Sandinista Front … that have no roots in the population. Even if they campaigned, it would be useless for these parties,” said Edgard Parrales, a law professor at the Autonomous University of Nicaragua, told Voice of America.

3. There are Covid-related campaign restrictions.

Campaigning for the election kicked off September 23, however, the CSE is imposing restrictions in response to the coronavirus pandemic. The court has asked candidates to campaign mostly virtually, banned rallies of more than 200 people, and mandated that campaign events not exceed 90 minutes.

These restrictions contrast with Nicaragua’s standard approach to the pandemic as a public health crisis. The country did not go into lockdown and Ortega himself hosted large events in 2020. But Ortega is also known for prolonged, mysterious absences from public life. He kicked off his campaign on October 4 in a private ceremony that was broadcast on television and radio, but it remains to be seen how much campaigning he will personally do.

Under electoral reforms passed in May, the Nicaraguan National Police are in charge of authorizing political campaign activities in public spaces and ensuring that candidates adhere to CSE’s regulations. In the past, the National Police have been criticized for their aggressive suppression of political expression, especially during 2018 protests when their actions left 328 dead and thousands in prison.

Still, Nicaraguans will have to be cautious participating in the campaign, as the country continues to battle the pandemic. The exact details on Nicaragua’s coronavirus scenario are hard to confirm the government claims that just 201 citizens have died and only 13,206 have been infected. The independent organization Citizens Observatory, however, puts the numbers at 4,500 deaths and at least 25,150 cases. The government has attacked health professionals who question their figures, labelling their actions “health terrorism” and forcing many of them into exile.

As of October 8, Nicaragua had the lowest Covid immunization rate in Latin America with just 4.9 percent of its population fully vaccinated.

4. It will be hard for civil society, including the Catholic Church, to play an active role.

In April 2018, Nicaraguans across the country rose up against the Ortega regime, initially in response to reforms to the country’s social security system. This grew into a protest driven by broader grievances like a proposed Chinese-sponsored canal and the Ortega regime’s political repression. The protests were supported by a diverse swath of civil society, including students, civic groups, peasants, LGBTQ advocates, feminists, and press organizations.

In response, Ortega declared protests illegal and began a harsh crackdown. This included revoking the licenses of human rights organizations, closing the offices of news organizations, and the persecution of movement leaders. He also expelled groups affiliated with the Inter-American Commission on Human Rights from the country.

Since these protests, there has been further repression. The National Assembly passed legislation that curtails political freedoms, such as the October 2020 Foreign Agents Law, which requires organizations that receive money from non-domestic sources to register as foreign agents. The government has also used raids and lawsuits to suppress the press’ ability to operate.

But one actor who remains active is the Catholic Church, a historically powerful and independent entity in the country and one that has served as a buffer in times of political polarization. In the 2018 protests, the Catholic Church played a major role as a critic. One of its bishops,Leopoldo Brenes, was themediator of the failed National Dialogue. During this period, there were numerous attacks against Church property. Subsequently, the Catholic Church has continued to criticize the Ortega regime. In his campaign launch in September, Ortega called bishops “terrorists.”

5. Most of the international community is united in criticism.

In the face of increased authoritarianism and anti-democratic initiatives, the international community has voiced its concerns over the state of Nicaragua. After the arrests of major opposition figures over the summer, the OAS passed a resolution condemning the Ortega regime, and U.S. Secretary of State Antony Blinken said the November election has “lost all credibility.” The UN Office of the High Commissioner for Human Rights also condemned the Ortega regime in May and also released a damning report in February, critiquing the lack of progress since the 2018 protests and the weakness of the national electoral laws.

Both the United States and the European Union have imposed sanctions and travel restrictions on major figures in the Ortega regime, including Vice President Murillo, in response. There are calls for Nicaragua to be suspended from the OAS for violating the Inter-American Democratic Charter.

Ortega has been undeterred by these actions. In any event, the electoral reforms passed earlier this year limit the international monitoring of the election.