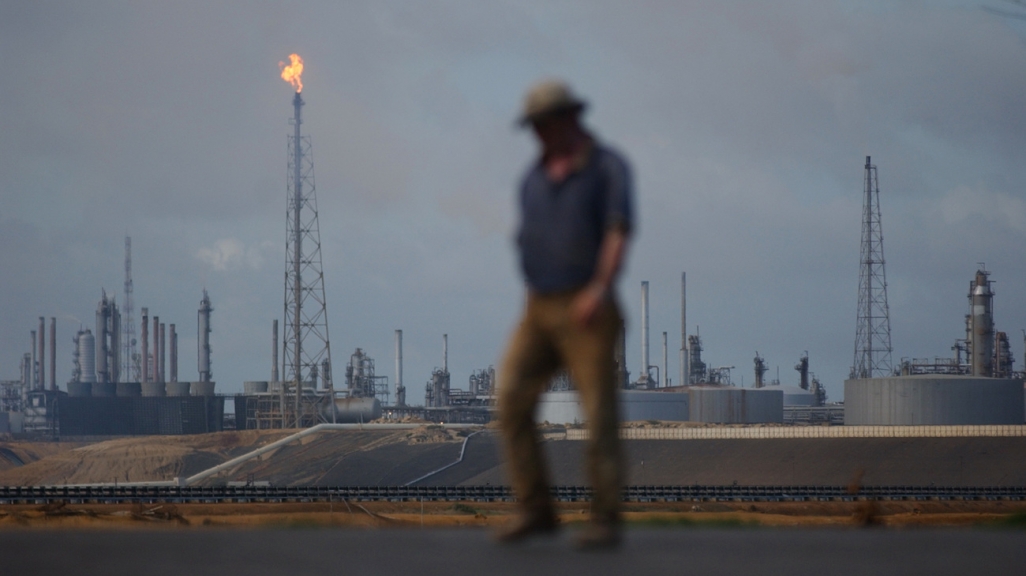 An oil worker in Venezuela. (AP)

One major global response to Russia’s invasion of Ukraine is a flurry of sanctions. The United States, the EU, and other allied nations are blocking the Kremlin, certain key businesses, and some individual citizens from global financial systems, trade, and travel.

The Russian economy responded by taking a nosedive. And the ripple effect is already affecting countries in Latin America, both because of Russia’s overall share of global economy and because Moscow supplies the region with key products like wheat, fertilizer, and oil.

Latin America is no stranger to U.S. sanctions, given that three countries in the region—Cuba, Nicaragua, and Venezuela—currently face them. Cuba and Venezuela are among five countries worldwide on which the U.S. maintains broad-based sanctions, meaning nearly all transactions are regulated in some capacity. Nicaragua’s sanctions solely target individuals and government entities. All three of these countries are close allies to Moscow, in part because the Kremlin helps them to work around U.S. sanctions.

Despite Venezuela’s ties to Russia, members of President Joe Biden’s administration traveled to Caracas on March 5 to negotiate with the regime of de facto President Nicolás Maduro. Part of the agenda included the possibility of lifting some of the broad sanctions placed on Venezuela’s oil sector in 2019, presumably to help ease the global supply contraction on oil production, as Biden aims to control rising gas prices.

In the United States, sanctions are requested by Congress, actualized through a presidential executive order, and executed by the U.S. Treasury Department. The Treasury’s Office of Foreign Assets Control (OFAC) enforces sanctions and issues penalties on violators.

What are the existing sanctions on Venezuela and its oil? And what do other sanction regimens look like in the region? AS/COA Online looks at the state of Washington’s sanctions in Latin America in order of the size of each country’s economy.

See what has been said by countries like UN Security Council members Brazil and Mexico, as well as Moscow allies Cuba and Venezuela.

The first sanctions levied against Venezuelans were related to Caracas’ lack of cooperation on antiterrorism and antinarcotic efforts. Back in 2006, the U.S. State Department registered that the Hugo Chávez government was noncompliant with the U.S. Arms Control Act. As a result, Caracas is banned from being involved in U.S. commercial arms sales. Sanctions related to antiterrorism efforts have been intermittently announced since. For example, in 2008, the United States sanctioned Venezuelan individuals and businesses who supported the Lebanese group Hezbollah.

It was 2005 when President George W. Bush first made the annual determination that Venezuela was not upholding its obligations to global antidrug trafficking accords. Beginning 2006, the United States has gradually added Venezuelans believed to be abetting the drug trade to its list of sanctioned individuals. As of 2021, at least 22 Venezuelan individuals and 27 companies are designated as Specially Designated Narcotics Traffickers.

The process of executing sanctions in response to political repression and human rights violations began in 2014, when the U.S. Congress passed the Venezuela Defense of Human Rights and Civil Society Act. The legislation mandates the president impose sanctions on Venezuelan individuals who are believed to have committed violence, serious human rights abuses, or antidemocratic actions. President Barack Obama implemented the first of these requested sanctions through an executive order in March 2015.

As of 2021, 113 Venezuelans are sanctioned in accordance with that executive order, including many of the country’s top political figures, such as Maduro and current Executive Vice President Delcy Rodríguez. Key members of Venezuela’s supreme court and leaders in the military, the national police, and the central bank are all covered by this sanction instrument.

Early in his term, President Donald Trump ramped up sanctions against the Maduro regime, moving beyond individuals. In 2017, he issued an executive order that cut off the Venezuelan government’s access to U.S. financial institutions. Blocked entities included Petróleos de Venezuela (PdVSA), the state-owned gas and petroleum company. Oil is critical to the Venezuelan economy, making up a quarter of the country’s GDP and 99 percent of export revenues.

In 2018, the Trump administration issued several new rounds of sanctions aimed at further isolating Maduro and his allies from the international community. These included sanctions on the purchase of Venezuelan debt and barring transactions involving Venezuelan digital currencies. Sanctions were also imposed on the assets of any person who performs corrupt transactions with the Maduro regime. At least 26 individuals are covered under this rule, including those who have helped the Maduro regime evade oil sanctions.

In 2019, the Trump administration turned its sights toward PdVSA. The Treasury began to block all property within U.S. jurisdiction belonging to the company. Generally, U.S. companies and citizens are currently prohibited from dealing with PdVSA. Select companies, namely PdVSA partners like Chevron, are allowed to maintain essential operations, though they are required to wind down their activities by June 2022. Also in 2019, Treasury sanctioned non-U.S. companies that deal with PdVSA, including Russian banks. The next year, Treasury began sanctioning those who aid in the export, production, or sale of Venezuelan oil. This included several Mexican firms.

On January 23, 2019, Juan Guaidó, as head of the National Assembly, assumed the role of Venezuela's interim president, per the Constitution. That same day, the State Department announced it was switching its recognition from Maduro to Guaidó as Venezuela's legitimate head of state. Following this, the Trump administration escalated sanctions against Venezuela, citing acts of electoral repression by the Maduro regime as the reason. In all, Trump inked seven executive orders on Venezuelan sanctions. This included sanctions against state-owned or state-affiliated companies, such as the gold mining firm Minerven, the army, the national police, the central bank, and logistics companies.

Congress contributed to these efforts by passing the bipartisan VERDAD Act in December 2019. This act imposed sanctions that hamper the Maduro regime’s ability to access financial instruments and specifically revoked visa privileges for people who acted on behalf of Russia to aid the Venezuelan security forces. The measure also enlisted the State Department to help other countries and entities, such as the EU, in imposing sanctions on the Maduro regime.

Russia's increasing influence in the hemisphere and a spike in oil prices after the invasion of Ukraine have led to calls for negotiations.

Havana was first hit with sanctions in 1958 as an arms sale ban against the regime of former Cuban President Fulgencio Batista. In 1962, the sanctions, or embargo, were expanded as a retaliation to Cuba’s cooperation with the Soviet Union. Since then, the embargo has prevented U.S. companies and individuals from trading with or traveling to the island nation for tourism, though as of 1999 some limited travel is allowed under certain licenses designated by OFAC. Those licenses are expanded and in turn dialed back from administration to administration. It is the longest-standing trade embargo in world history.

In 1977, the travel and spending restrictions on Cuba lapsed. They were reinforced by the Cuban Democracy Act of 1992 and the Helms-Burton Act of 1996, which blocked foreign companies that deal with Cuba from doing business in the United States.

In 2014, Obama, alongside Cuba’s then-President Raúl Castro, announced a rapprochement process between the two nations, with Washington appointing its first ambassador in more than 50 years to Havana in 2016. The Obama administration rolled back some restrictions, such as amending the Cuban Assets Control Regulations to allow for some financial activity between the two countries, namely around remittances and fund transfers. It also saw some of the travel restrictions for U.S. citizens to the island relaxed. The United States removed Cuba from the State Department’s list of State Sponsors of Terrorism in May 2015.

From the start of his term, Trump announced and executed his intention to reverse many of the Obama administration’s policies, including the Cuba rapprochement. In 2021, the Trump administration added Cuba back to the State Sponsors of Terrorism list, increased travel restrictions for U.S. citizens, and placed additional sanctions on the country, in part due to its relationship with the regimes in Nicaragua and Venezuela.

New sanctions introduced under Trump targeted the Cuban military and security forces. These sanctions were expanded under Biden, as a reaction to Havana’s crackdown on protests in Cuba in the summer of 2021. Although Biden pledged during his campaign to return to the Obama-era relationship with Cuba, he has yet to lift or relax many of the restrictions Trump reinstated.

Washington first imposed sanctions on Nicaraguan individuals in 2018 as a response the government crackdown on civil protests. Starting in April 2018, Nicaraguans took to the streets, initially to protest social security reforms. That grew into a more generalized protest against the regime of President Daniel Ortega.

In November 2018, Trump passed the first executive order on Nicaraguan individuals. In this case, several people in Ortega’s coterie, including Vice President and First Lady Rosario Murillo and the chief of the police, were named specially designated nationals (SDNs). U.S. individuals are barred from transacting with SDNs.

One month later, the U.S. Congress passed the Nicaragua Human Rights and Anticorruption Act, or NICA. It was first drafted and passed by the House of Representatives in 2016 as a response to that year’s Nicaraguan general election. In that contest, Ortega won a fourth term, though there were widespread claims of fraud. After the 2018 protests, the legislation was revived, passed by both houses of Congress, and signed into law by Trump. The legislation allows the Treasury to sanction any person implicated in human rights abuses or corruption in Nicaragua.

Since 2018, the United States has gradually added individuals and select Nicaraguan companies to the list of sanctioned actors. This includes members of the Ortega family and their inner circle.

In November 2021, Nicaragua held elections that were heavily criticized due to the arrest of the majority of opposition candidates. In response, the United States and the EU introduced joint sanctions on individuals throughout the government, including in the military, the defense ministry, and one telecommunications agency. The United States also placed travel restrictions on 116 individuals. Congress passed the bipartisan RENACER Act days after the 2021 Nicaraguan presidential election that gave Ortega a fifth term. The act calls for the president to implement a number of sanction instruments on Nicaragua and to consider excising Managua from pacts like the Central America Free Trade Agreement.

Hope Wilkinson contributed to this piece.

By denying the Ortega regime of the legitimacy it seeks, Washington and the international community can discourage other budding dictators, writes AS/COA's Eric Farnsworth for Univision.