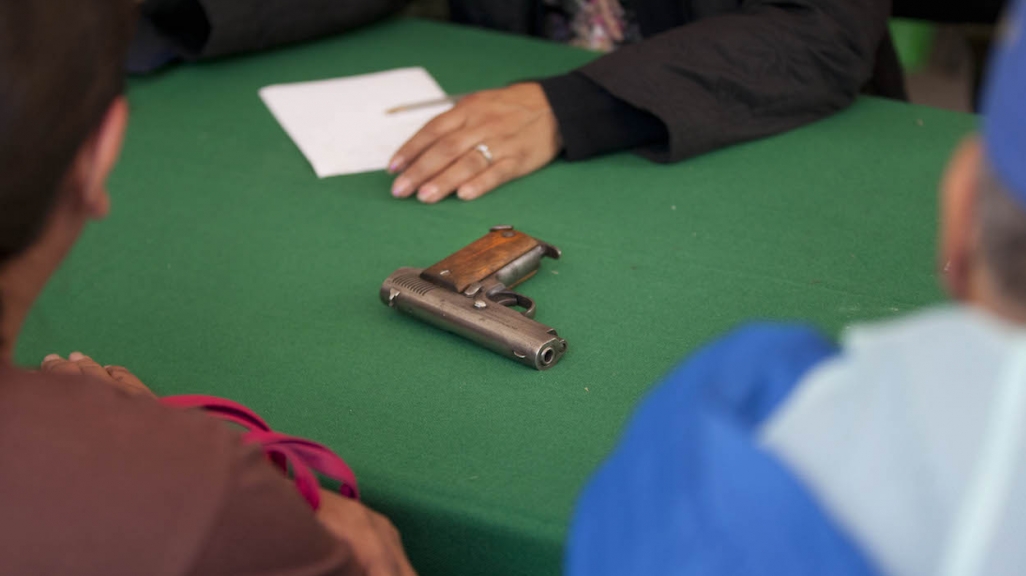 A gun surrendered in Mexico. (AP)

Countries may adopt stringent gun control laws, but their efforts are complicated by international arms smuggling. We explore policies in Argentina, Brazil, Chile, Colombia, and Mexico.

For government across Latin America, reducing violence and providing security are top agenda items. AS/COA Online looks at gun-related legislation in Latin America’s largest economies, identifying regulations for arms licensing. In Argentina, Brazil, Chile, Colombia, and Mexico, gun possession is legal for civilians, though restrictions tend to be stringent. In recent years, several countries sought to tighten gun control, while Brazilian President Jair Bolsonaro has sought to do the opposite. The effect of COVID-19 on firearm possession is yet to be fully seen, though some criminal enterprises grew during the pandemic.

To get a gun permit, citizens can apply through the Credential of Legitimate User of Firearms (CLUSE, in Spanish). The application process is open to Argentines 21 and over and requires the prospective owner to show they have no criminal record, provide details of where the gun will be kept, pass physical and psychiatric examinations, undergo firearm training, and show proof of income. All prospective owners are also fingerprinted.

The application process for permission to carry a gun requires all of the above requisites as well as a request justifying the need to transport the weapon. Licenses are valid for one year, after which all documents must be resubmitted. Furthermore, firearm makers and dealers must keep a record of all weapons made and traded. Semiautomatic weapons are permitted for civilians.

The government has in place a paid voluntary and anonymous gun surrender program known as PEVAF. From 2007 to 2015, more than 300,000 guns and 1.3 million munitions were destroyed through the program.

As an autonomous agency of the Ministry of Justice and Human Rights, ANMaC is responsible for overseeing gun registration and the gun surrender program. Until 2015, gun ownership in Argentina was overseen by the National Firearm Registry, known by its initials in Spanish, RENAR. ANMaC builds on its predecessor’s work by developing policies to reduce gun violence. Importantly, ANMaC is government-funded, as opposed to the private support RENAR had.

In 2021, 1.62 million weapons were registered to just over 1 million owners in Argentina, though it is estimated that there are another 1.6 million illegal weapons in the country.

Civilian gun ownership is permitted in Brazil. To own a firearm, citizens must be at least 25 years old and register the weapon with the Federal Police. Only handguns and semiautomatics are authorized; assault weapons are illegal for civilians. Gun permits cost $26 and must be renewed every ten years, according to 2019 legislation. Penalties for illegal firearm possession range between one to three years in prison. In addition, Brazilian law outlaws the manufacture, sale, and import of toys and replicas of guns that could be confused with real weapons.

While Brazilians can buy guns, carry permits—authorizing the person to bring the weapon outside his home—are difficult to obtain. Applicants must provide a written declaration explaining the necessity of carrying the weapon, prove that they have no criminal background, and pass a mental health test with a government-approved psychologist. Carry permit seekers must also show that the individual received training to use a gun. The permits are valid for five years. Carry permits are authorized for members of the armed forces, police, prison guards, security officials, and transportation companies. Civilian-owned guns are prohibited in schools, government buildings, churches, and sports complexes.

Bolsonaro, who took office in January 2019, campaigned on a pro-gun message, contending that arming citizens would help reduce crime. He has passed nearly 30 decrees that weakened gun control, including increasing the number of firearms one can own from four to six, authorizing the carrying of up to two guns in public, doubling the amount of ammunition that can be purchased for certain weapons, and easing the licensing requirements for gun collections and hunters. The number of firearms legally purchased in Brazil has increased 65 percent since he took from office—from 700,000 guns in 2018 to 1.2 million in 2021. However, estimates suggest the total number of firearms in the country is 10 to 15 times higher.

Though not a constitutional right, personal firearm ownership is permitted in Chile for any resident over the age of 18. The extensive procedure for acquiring a weapon includes registering a home address with the national firearm authority (Directorate General of National Mobilization, DGMN), receiving psychiatric approval, and passing an official exam on the proper use and maintenance of firearms. A standard permit allows ownership of up to two weapons. An individual must apply for an additional license and provide justification in order to own more than two guns.

Furthermore, it is illegal to carry a gun out of a registered home address unless the person has a carry permit—another complicated document to acquire that includes additional psychiatric approval. All licenses need regular recertification. It is illegal for civilians to own semiautomatic weapons in Chile.

The national firearm authority conducted a public campaign in 2012 on the importance of the “responsible ownership of firearms,” asking Chileans to voluntarily register their weapons if they hadn’t done so and asking them to hand guns over, registered or not, to the police to be destroyed. By the end of the year 5,554 guns were destroyed, 47 percent of which had not been legally registered with the authorities.

In February 2015, then-President Michelle Bachelet signed a gun control bill into law, including new restrictions on gun sales, increased sentences for gun violations, and changes to gun registration. At that time, there were around 750,000 registered guns in the country. Under the law, carrying a defaced, sawed off, or otherwise illegally modified gun carries a penalty of between three to 10 years in prison, and a minimum of three years for those who provide guns to minors. Carrying an unregistered gun is punishable by a three- to five-year prison sentence. The law prohibits gun ownership for anyone with a criminal history. The law also made psychological evaluations and gun knowledge tests more stringent and also encourages citizens to turn in and destroy their guns.

We Know How to Reduce Homicides in Latin America. Where's the Political Will?

The solutions are there, and now it's time for leaders to commit to them, writes AS/COA's Brendan O'Boyle in The Washington Post.

Gun possession in Colombia is restrictive. The country’s Constitution of 1991 allows civilians the right to possess and carry a gun after obtaining a license, but in recent years presidents have issued decrees severely restricting carry permits. The Constitution also bans civilian-owned guns at political meetings and elections.

The country’s firearm regulations are governed by the Colombian legal system and penal code. Civilians 18 and older can purchase and carry small caliber handguns and shotguns with barrels of 22 inches or less with a license and for the purposes of self-defense. That said, higher caliber handguns, semiautomatic guns, and automatic guns are all prohibited, except in “exceptional circumstances.” To receive a permit for an automatic weapon to be used for personal protection, applicants must appeal to the Arms Committee of the Defense Ministry. All guns must be registered with the military, which maintains a national gun registry. The armed forces have a monopoly over the sale of weapons and ammunition and issue all gun permits.

To obtain a gun ownership license, valid for 10 years, applicants must pass criminal and mental background checks and prove their ability to use firearms. Carry permits are only valid for three years. Applicants for either the license or permit must prove the weapon is either necessary for self-defense or required for his or her profession. Illegal gun possession carries a sentence of between four to 15 years in prison. If a licensed gun owner is found guilty of domestic violence, the person may have his or her permit suspended or revoked.

Carry permits were first banned in Bogotá in 2012. In 2015, a nationwide ban on carry permits except for special circumstances went into effect and has been extended each year by executive decree. The most recent extension applies through December 31, 2021.

Although Mexicans have a constitutional right to own guns, one obstacle limits gun purchases: there is only one gun store in the country, located in Mexico City. Still, in 2017, Mexico ranks seventh worldwide in terms of the number of privately owned guns and violence stemming from a battle against organized crime in recent years has raised concerns about gun smuggling, particularly from the United States. The Mexican military approximates that 200,000 firearms enter Mexico from abroad each year, though some organizations put that number at 250,000. A 2021 study found that an estimated 70 percent of those are smuggled in from the United States.

Article 10 of the Mexican Constitution entitles the country’s citizens to own guns. After civil unrest and the student movements of the late 1960s, a 1971 reform to the constitution made Article 10 more restrictive; citizens were limited to gun ownership at home, while the right to carry weapons—whether openly or concealed—became restricted to federal jurisdiction.

Citizens can largely carry handguns, shotguns, and rifles below specific calibers. Gun ownership requires obtaining a one-year gun permit from the Secretariat of National Defense within 30 days of acquisition. A gun owner must belong to a shooting club to get a permit, can get permits for up to 10 weapons, and can only purchase ammunition for the calibers of guns owned. Other requirements include being 18 years of age, having mental and physical capacity to operate a gun, holding no criminal convictions, and fulfillment of military service. Private sale of guns is allowed, and subject to the same gun-permit laws. A separate permit is needed for a citizen to carry a weapon outside of a residence, and involves requirements such as an occupational necessity (for example, employees of security firms or rural workers).

In 2015, the country’s legislature approved changes to the country’s Federal Law of Firearms and Explosives introduced by President Enrique Peña Nieto. It allows foreigners who work in customs, immigration, or high-level government security agents to carry guns in Mexico, as well as allowing Mexican officials in the same areas to carry guns abroad. Another bill signed by Peña Nieto that same year made the possession of gun cartridges and magazines illegal and increased penalties to two and five years in prison, as well as raised fines.

Two months after her election in 2018, Mexico City Mayor Claudia Sheinbaum started the “Yes to disarmament, yes to peace” program. Citizens can participate in the voluntary disarmament campaign in the city and exchange firearms for toys or financial compensation of up to $939. In 2019, the program recovered 3,620 light weapons, 838 heavy weapons, and over 900,000 ammunition cartridges.

Still, the Mexican military and police forces purchase arms from the same American companies named in the lawsuit. Guns bought by law enforcement sometimes enter the black market and end up in the hands of criminal enterprises. In the past two years, 341 long arms and 1,075 pistols have been reported missing from police and military forces, though this number is likely much higher.

Though countries across Latin America have strong gun control measures, their efforts are undermined by the illicit flow of arms internationally. Guns acquired illegally are used by organized crime groups across the region, fueling violence. While the scale of this problem is difficult to assess, firearm busts have helped hint at its size. For example, in March 2021, an INTERPOL and UN police operation, nicknamed Operation Trigger VI, saw the arrest of 4,000 suspects across every nation in South America. The agencies seized almost 200,000 illicit firearms, parts, components, and ammunition.

There’s also a problem of so-called “ghost guns,” which are guns assembled from pieces bought online. These guns lack serial numbers, making them difficult to trace. Thousands of “ghost guns” assembled by organized criminal groups from parts made in the United States have been seized across Latin America.

This explainer was originally published in January 2013. Fernanda Nunes contributed to the March 2019 update.