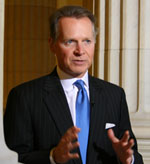 U.S. Congressman David Dreier (R-CA) spoke with COA Director of Government Relations Kezia McKeague about his views on trade, security, immigration, and U.S. policy towards Latin America—a region that he has closely followed since first being elected to Congress in 1980. Dreier chairs the House Rules Committee and is the founding chairman of the House Democracy Partnership, which works with partner countries to support the development of legislative institutions. In 2004, he received the Council of the Americas Chairman’s Award for Leadership in the Americas. Dreier, who led a congressional delegation to Latin America after recent U.S. passage of trade pacts, said: “I think that the notion of seeing success with the Colombia and Panama agreements will go a long way towards sending, I hope, a ripple effect to other countries in the region.”

AS/COA Online: You just led a bipartisan delegation of House members to Colombia, El Salvador, Guatemala, Panama, and Peru under the auspices of the House Democracy Partnership. As a frequent traveler to Latin America, what will stand out in your memory of this particular CODEL?

Representative David Dreier: A number of things. First, we were marking the success of passing the Panama and Colombia free trade agreements [FTAs] after five years. Spending time with Presidents [Ricardo] Martinelli in Panama and [Juan Manuel] Santos in Colombia was important. We were the first delegation from the United States Congress to go to those two countries following the passage of these agreements. And so, in many ways, while we were in a celebratory mood, it’s just a first step. It’s a first step towards ensuring that we continue on the path that we have been on for greater economic liberalization, recognition of human rights, and dealing with security issues.

In Colombia especially, where there continues to be virulent opposition from many in the United States Congress towards that country, there’s recognition that it is absolutely essential that the Colombian government continue on its very important path of ensuring that labor issues are addressed. Our celebration was not only for passage of the U.S.-Colombia free trade agreement, but the capture and killing of Alfonso Cano, who was a FARC leader there who for 30 years had perpetrated terror on the Colombian people.

In Peru, we had a chance to talk about the success of the trade agreement and it was fascinating; I met with Oscar Espinoza, a head representative of Caterpillar in Peru. He told me that in 2003, Caterpillar had $200 million in exports from the United States to Peru. This year, it’s going to exceed $1 billion. That’s all a byproduct of the FTA. So we’re looking forward to the same kind of potential exports of U.S. manufactured goods and services for union and nonunion workers here in the United States from companies like Caterpillar, John Deere, Whirlpool—manufacturers in the Rust Belt, the middle part of the United States—who are going to end up being real beneficiaries. U.S. workers will be the real beneficiaries of these agreements.

The thing that was most stunning to me on the trip, I think, was going into El Salvador. I realized how old I am when I recognized that I’ve really been around the track. In the 1980s, I spent a lot of time in El Salvador perpetuating the Reagan vision of democracy and free markets, and we were struggling against what was known as the Farabundo Marti National Liberation Front—the FMLN. It was horrible. I was part of the commission that investigated the tragic murders of Father Ignacio Ellacuria and the five other Jesuits and their housekeeper and her daughter. November 16 marked the twenty-second anniversary. And it was a horrible, horrible time.

And now, the president of the country, Mauricio Funes, and the speaker of the parliament, Sigfrido Reyes, were both FMLN, and are leading the country. And they’re leading the country, both rejecting the vision of Venezuelan President Hugo Chávez, and passionately embracing rule of law, political pluralism, and the necessity of developed democratic institutions. So I was very, very encouraged by that.

And then, in Guatemala, they’ve just had an election and there’s a new president-elect there. His name is [Otto] Pérez. He’s a retired military general. I spent quite a bit of time with him, and one of the things we talked about was the Central American Free Trade Agreement [CAFTA]. And he plans, as president, to take on the CAFTA, which has had sort of mixed results. I was stunned when I found that in the six or seven years since we passed the CAFTA that there’s supposed to be an annual meeting of the leadership there, and it hasn’t taken place. President-elect Pérez is looking to take a lead role in bringing the CAFTA countries together, because they just have not seen the kinds of benefits that they should from CAFTA, and we want to help facilitate the development of that.

AS/COA Online: On that theme, now that Congress has approved the free trade agreements with Colombia and Panama, much attention is focused on Asia and the Trans-Pacific Partnership negotiations. In that context, how do you view the future of the hemispheric trade agenda? What are the next steps for expanding trade in the Western Hemisphere?

Dreier: I think that the notion of seeing success with the Colombia and Panama agreements will go a long way towards sending, I hope, a ripple effect to other countries in the region. Of course, we deal with the challenge of Brazil, and they’re clearly very competitive with the United States. That’s not necessarily a bad thing. But we have to contend with MERCOSUR and the continued expansion there. I think the idea of bringing the MERCOSUR countries into some kind of greater trade relationship with the United States is a good thing for us. I will say that the capture and killing of Osama bin Laden can also play a role in allowing us to have a renewed focus on the hemisphere, which is important.

As I listened to the president’s remarks at the APEC summit [in November], I was thinking back to a speech that I gave in 1999. I gave the commencement address at Pepperdine University, and in that speech, as we were looking at the new century, we referred to the twentieth century as the American century, and I referred to the twenty-first century in that 1990 speech as being the American-Pacific century.

Now, when you say American-Pacific century, that doesn’t just include Asia. It includes the Americas. And I think that that’s a very critical factor here for us. We know that Peru has played a very active role in APEC, and there are other countries on the South American continent that are also joining APEC. And so APEC is not necessarily contrary to our goals within this hemisphere. I see it as being complementary.

AS/COA Online: You also chair the U.S.-Mexico Inter-Parliamentary Group, and you have been very involved with Mexico issues. How do you view the prospects for continued congressional support for security assistance to Mexico, as well as to Central America?

Dreier: Because of my work in the U.S.-Mexico Inter-Parliamentary Group, I have known Felipe Calderón, the president of Mexico, for over 20 years. We met when he was a parliamentarian.

I think that the Calderón government is the first that has really stood up to the drug cartels, and that’s why we’ve tragically seen thousands of people killed in Mexico. But I think that the big, overriding issue that we’ve got is the problem of immigration reform. That’s the elephant in the middle of the room. It’s something that I hope we can address, something we need to address. Border security continues to be priority number one, as national security is priority number one, but we have got to tackle this issue. And I think that will go a long way towards dealing with the challenges that exist not only in Mexico, but throughout the hemisphere.

AS/COA Online: At a time when many in Washington bemoan the relative decline of U.S. standing in the region, why does Latin America matter to the United States? And how would you assess the current state of U.S.-Latin American relations?

Dreier: Well, first, we are all the Americas. Many people in the United States refer to Latin America as our backyard. And I used to make that mistake myself, and I no longer do, because we are all neighbors in the Americas, and we’ve got to remember that. With the expansion of political pluralism, the rule of law, and the development of democratic institutions, as Ronald Reagan envisaged it, I think that we have the potential to strengthen our ties in the region.

I will tell you something—just an interesting line on that as we look at this challenge: President Santos had a view of Hugo Chávez in Venezuela that was contrary to that of his mentor, Álvaro Uribe. The day after he was inaugurated, he contacted Hugo Chávez. Lots of antennae went up when that happened, and there was real concern. And he said something to me that was very telling. He said to me—when I asked about this—that the goal is to emulate Ronald Reagan, to lead by example. He said Hugo Chávez was able to do to Colombia what Fidel Castro has done to the United States, that is, demonize the United States and be strengthened because of it. He said Hugo Chávez’s popularity has dropped substantially. And President Santos attributes that to the fact that Hugo Chávez can no longer say “we deal with the threat of an invasion from Colombia.” This approach is allowing him to build upon the amazing transformation that Colombia experienced under President Uribe.

I think that this notion of leading by example, which is taking place in the great countries of the South American continent, is an important thing. And it is taking place today. For that reason, I believe that we have the potential to have an even stronger relationship on the continent. I’m very optimistic and upbeat about Latin America.

The Big Question Facing AMLO in 2020

The need to offer concrete results could make the next 12 months the most important of López Obrador’s presidency.