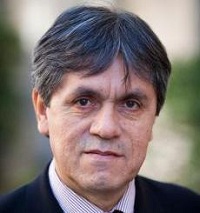 January 12, 2012
“This is going to be part of a movement in favor of transparency, democracy, human rights, and freedom of expression in Latin America.”

Jorge Luis Sierra is an award-winning Mexican journalist who covers Latino issues and armed conflicts. Based in Texas, he has written for some of Mexico’s most prestigious publications, such as El Universal, Contralínea, Proceso, Reforma, El Independiente, Expansión, and Siglo 21. He also worked as an editor and journalist for several Spanish-language newspapers in the United States. He covered the Iraq war in 2003, and wrote The Enemy Inside: Armed Forces and Counterinsurgency in Mexico, a book about Mexican national security.

Sierra is also a Knight International Journalism Fellow who runs Mi Panamá Transparente, a crowdsourcing website in Panama that allows people to anonymously report crimes and corruption. AS/COA Online's Editorial Associate Rachel Glickhouse spoke to Sierra about the crowdsourcing project and his plans to expand to other Latin American countries.

AS/COA Online: What is Mi Panamá Transparente and how does it work?

Jorge Luis Sierra: It is a website, but it is also a tool that brings together journalists and citizens who want to fight crime and corruption together in Panama. We are also replicating the tool in Mexico, Colombia, and Guatemala. The main idea of this website is to receive citizens’ reports on crime and corruption and then put the reports on the website, try to verify the information, see if there’s something newsworthy, and then publish a story in a newspaper, on TV, on the radio, or on a website. The idea is to produce an impact on society, security, and transparency by bringing journalists and citizens together.

AS/COA Online: Considering your background in traditional journalism, why did you decide on this route of web-based, user-generated journalism?

Sierra: This is quite important, because Mi Panamá Transparente is a website that is showing journalists what is most important for citizens, so citizens are getting closer to journalists with this tool. Most of the media organizations and publications in Panama, as well as in other countries in Latin America, are creating their own agenda to produce news. So if you look at the most important newspapers in Latin America, they are reporting mostly about politics, elections, political parties, or congress.

But sometimes incidents that are important to citizens are not reflected in the newspapers. This tool allows citizens to send reports on crime and corruption in an anonymous way, so they can feel comfortable sending those reports. For me, it was an extraordinary opportunity to continue to do journalism but in a thoroughly new way, using digital tools, social media, and a website.

AS/COA Online: What is the process to verify reports on the website?

Sierra: We don’t have the capacity to verify all the reports, but we analyze the information. We see if the report makes sense, if the citizen is a direct participant in the incident he is reporting, and if he has some credibility. We can put that information into the website as a non-verified incident. Next, once it is on the website, we begin a process of closer verification by calling the citizen, by sending an email or a text message, requesting more information or documents, and trying to go through all sources of information. This is like a regular journalistic verification process.

We are a small number of people working on this project, so we don’t have the capacity to verify all the incidents. We have to pick the most important reports and then try to verify and investigate them.

AS/COA Online: Can you describe some examples of a journalist’s report from the website that brought about change or action from the government?

Sierra: We had a case of corruption in the immigration department at the Costa Rica-Panama border. It was an immigration inspector who saw that some of the officials were asking for money without authorization from the visitors who were coming to Panama from Costa Rica. This young lady was in charge of inspecting the procedures at the Costa Rica-Panama border. So when she realized what was going on, she filled out a form and then sent a report to Panama City complaining about this case of corruption in the department. In response, the immigration department decided to fire her.

So she sent information to the website and we investigated that case because corruption is a big issue here in Panama, and there had been some stories in the newspapers and on TV regarding corruption in that department. We decided to investigate. We met with the woman and she brought documentation about her case. Once we had all the information and we were convinced that there was some credibility to the report, we started the journalistic investigation.

We called a reporter from La Prensa, the most important newspaper here in Panama. She conducted the investigation, calling the immigration department and the authorities at the Costa Rica-Panama border. She did a full investigation and published a story. Two months later, the editor of Mi Panamá Transparente found the former immigration inspector at the national university here in Panama and told her that she got her job back. So we made an impact.

Another example is a report of gang activity on a bridge from Panama City to San Miguelito, another municipality. It was important because thousands of people were crossing the bridge to go to work or to get home, but it was difficult for them because there were gangs on the bridge assaulting people.

We did an investigation and we discovered several things. For example, there were some billboards on to the bridge creating a kind of a tunnel effect, so the people using the bridge were not able to see who was on the bridge, including the gang. The lights on the bridge were destroyed and there was little maintenance.

So we started an investigation with La Prensa. Once we ran the story, the bridge got lights and the police department sent more policemen to patrol the area. I think that at least things were resolved for that part of the community, but there are more than 50 bridges in Panama City. This problem still persisted for some of them. We are in the process of producing a bigger story about security on all of the bridges.

AS/COA Online: Why is the Mi Panamá Transparente pilot program important as a test for other countries?

Sierra: It’s important, from my perspective, because it is creating a tool that involves journalists, citizens, and civil society organizations. In Panama, we are working not only with media organizations but also with non-profit organizations like the Forum of Journalists in Panama who focus on the defense of freedom of expression. We are also working with the Panama chapter of Transparency International.

This project allows us to bring together journalists, citizens, and civil society organizations, which is not very common in Latin America. So I think in Panama, we have the opportunity to develop this as a pilot because Panama is as big as Mexico. We have different conditions in terms of the violence here in Panama, which is not as large as in Mexico or Honduras or Guatemala. We have the opportunity to develop the tool here, but now we are in the process of replicating the experience in Mexico where the number of murders exceeded 50,000 over the last five years.

In Mexico there is a problem with drug trafficking and an armed conflict. The conditions in Mexico are much different than they are in Panama. We are developing a stronger tool in order to make sure that the citizens can send reports in an anonymous way, because we don’t want to risk citizens being identified by drug traffickers or corrupt authorities.

We are going to replicate the Panama website and apply the same tool in Colombia and in Guatemala at the very beginning. This is why the pilot was so important for us, because we tested it in the field.

AS/COA Online: You’re planning to expand to Mexico, Guatemala, and Colombia. What is the plan for implementing the project in these countries?

Sierra: In Colombia, we’re working with the International Center for Journalists, which is a non-profit and has put a Knight fellow there in Bogota working at El Tiempo, one of the biggest newspapers in Colombia.

We have started to work in Mexico too, with different partners. The most important one right now is El Universal de Mexico, which is the oldest and largest newspaper in the country. But we also have some networks of journalists and civil society organizations interested to become part of the project.

We plan to launch the Mexican website in about three months—in June, I think, we are going to have some reports in Mexico. At the very beginning we need to promote the website, so we are going to produce some public service announcements. Many Mexicans use the Internet, and there’s a huge interest to participate in the news process. There are hundreds of comments on news websites, like El Universal or La Reforma. So I think people are quite interested in participating, and we are going to take advantage of that trend.

The Mexican website is going to be a better pilot in a country where I think the situation is in some ways difficult, critical, and challenging, but I trust the tool is going to give citizens the opportunity to work with civil society organizations and journalists.

AS/COA Online: Do you think you plan to expand to other countries in the region?

Sierra: Yes. The idea is to create a Latin American map on crime and corruption made by citizen reports. Initially, we are going to have just four countries—Colombia, Panama, Guatemala, and Mexico—but over time we’re going to have a complete map at least of Central America, from Colombia to Mexico, covering crime and corruption. Institutions, governments, universities, media organizations, and civil society organizations are going to be able to see trends and patterns on this map.

I think it’s going to be quite an important tool to see trends of corruption, and it will be useful for public officials and legislators to produce better public policies on security and transparency. I hope over time we’ll see a positive impact on those societies. This is going to be part of a movement in favor of transparency, democracy, human rights, and freedom of expression in Latin America.

Innovative and Sustainable Healthcare: The Future of Health Systems in Latin America

AS/COA's Healthcare Series offers recommendations for governments, providers, and stakeholders to address inefficiencies and inequities in the... Read More