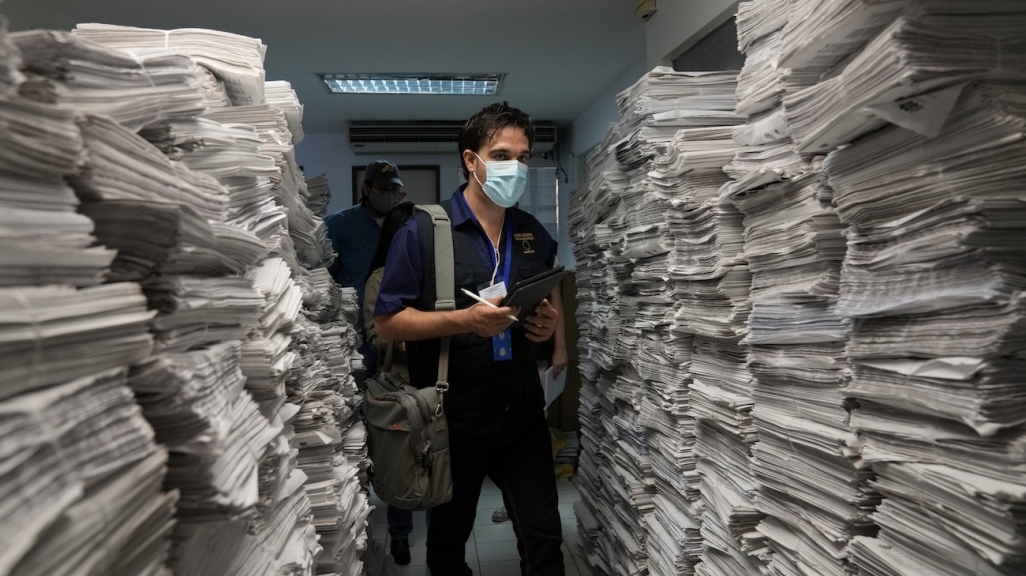 “You can’t force people to vote when they themselves are convinced that the system is completely rigged,” says the AS/COA Venezuela Working Group head of the November 21 vote.

Venezuela is holding state and local elections on Sunday, November 21. And, for the first time since those same elections four years ago, the main opposition coalition is fielding candidates. AS/COA Online talks with Guillermo Zubillaga, Venezuela Working Group head and senior director for public policy programs, about why the vote isn’t free and fair, why the opposition and EU are participating, and why Venezuelans “just want to vote.”

AS/COA Online: Why did the opposition decide to suspend their boycott and participate in these races?

Guillermo Zubillaga: This was seen as a kind of first gesture by the opposition in the negotiation process taking place in Mexico City and brokered by the Norwegians, which ultimately is seeking a presidential election in Venezuela. The regime, however, has since abandoned the negotiation table after the United States extradited one of their diplomats, Alex Saab, whom many consider to have benefited from corrupt business deals, helped launder the Maduro regime’s money, and evade some financial sanctions. He’s Colombian, but the regime gave him a diplomatic title and they even wanted to make him part of their negotiating team. But the chavistas abandoned the dialogue, and here is the opposition with their decision to compete in these far-from-fair elections.

AS/COA Online: So the opposition is participating sort of as a show of good faith in the negotiations?

GZ: Partially. Also, people in the opposition felt that the strategy of a total regime change was not working and that we need to aim at a more gradual solution, so I think that those two combined give you the reason why you have part of the opposition in these elections.

AS/COA Online: And I suppose there’s only so long you can ask natural-born politicians to not run for office.

GZ: That’s right. Exactly. These opposition figures—some who are exiled or in prison and others who aren’t—would be very competitive in other countries, and they include people from underprivileged backgrounds, women and men who have good ideas. They’re not radical, they’re centrist, they understand the issues. But they’ve been operating in this context that is completely anti-democratic. They know how to put a campaign together, but just the conditions have not been there for them and, frankly, I don’t think they are there now.

AS/COA Online: Another new presence in these elections will be electoral observers from the EU for the first time in 15 years. Why has the EU said they decided to send observers, and what has the reaction from the rest of the international community been to this decision?

GZ: The EU decision also comes from the Mexico City talks. The EU was a big proponent of those talks. They are looking for a peaceful resolution to the Venezuelan crisis, so them participating as observers was seen as an “I can do my part” to try to help take this election to another level and support the opposition’s decision to participate, and back up or provide witness to their participation. That said, for the rest of the international community, the decision is being seen as having validated the process and helping Maduro because it gives this election an element of normalcy that it doesn’t have.

And the fact that the EU is observing the elections doesn’t mean that they will say these elections were free and fair. In many instances, they’ve gone to observe and end up detailing all the irregularities. I think that ultimately the EU observation could be helpful for a long-term solution to the Venezuelan crisis.

AS/COA Online: We've heard a lot that this vote won't be free and fair. What are the specific conditions and regulations that make this vote so undemocratic? Or, what rules would need to be changed so that they were free and fair?

GZ: Oh so many. All the irregularities that have been there before, of course—disqualification of key political people who are in exile, in prison, under house arrest—continue to be there, and there is zero freedom of press. So, I think those are major ones that are still in place that one could label this process unfair. One notable thing though is that the regime is using one of its well-known techniques against dissident chavistas, which was funny because we haven’t seen that. There were some people who were closer to Chávez than to Maduro who wanted to run but were quickly hit with some lawsuits and disqualified.

And one of the biggest steps that the Maduro regime has taken in the last year toward a solid dictatorship is that when the Supreme Court said to certain opposition parties that it would appoint new leadership for them. If you look at the ballot today, some of the biggest and most established parties like Voluntad Popular and Acción Democrática show up with their logo and their colors, but they’re under a management that was appointed by the Supreme Court that is completely affiliated with Maduro.

Also, all the regime candidates are using public funds to air campaign ads constantly 24/7 on public TV channels while the opposition candidates get nothing.

AS/COA Online: How have people's attitudes toward both the Maduro regime and the opposition changed over the last year or so? Is opposition toward Maduro fierce as ever? Or are people more resigned/fatigued by the opposition?

GZ: Maduro is trying to make it seem that people are excited, but they’re not. I think that we’re going to see very low participation. It’s hard for people who have seen all these abuses of power for the past five years to turn on the TV, see almost this total abuse of the public airwaves by chavista candidates, and say, “Oh yeah, these are free and fair elections.” Once bitten, twice shy, you know? You can’t really change people’s minds forcibly. They see, they’re not stupid, they see the situation.

At the same time, people also see that Guaidó’s ascent to power has not materialized, there’s been no regime change, so they think maybe we can try to makes some gains and try to control the municipality where I live and try to have a voice there.

Venezuela has a history and a legacy of being a democratic country. People know what to do. They just want to vote. Voting as an exercise of protest continues to be the most peaceful way. You can’t force people to vote when they themselves are convinced that the system is completely rigged from years of experience living it firsthand.