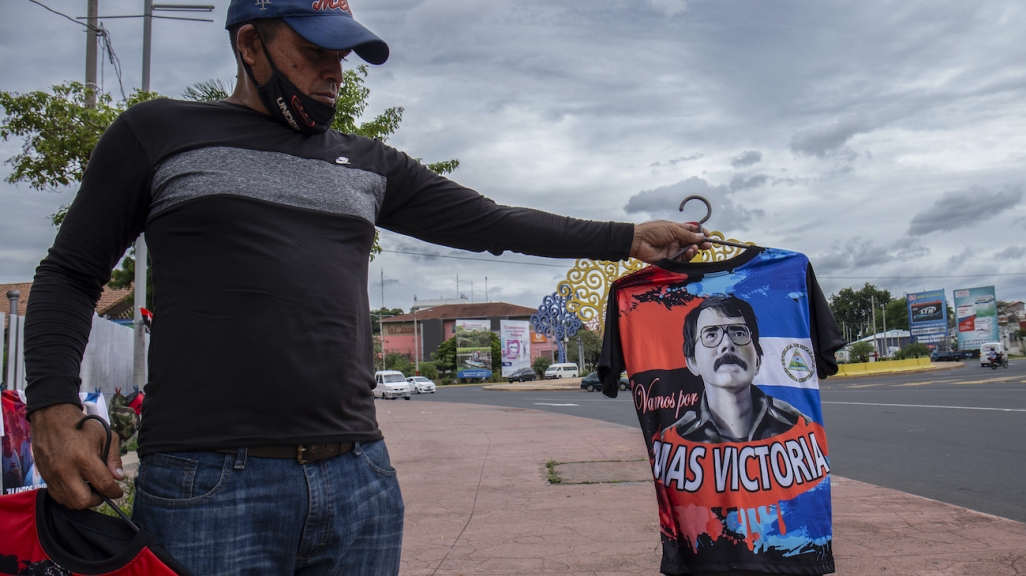 “It’s like a slow-motion train wreck,” says the AS/COA vice president of the November 7 vote, widely considered a sham.

Nicaraguans head to the polls on November 7 to vote in a presidential election in which Daniel Ortega has taken every step he can to ensure he wins a fifth term. In a country with more than 150 political prisoners, AS/COA Vice President Eric Farnsworth analyzes what the potential effects of a new Ortega government would be and what the international community can still do to support democracy. “There should be no tolerance for political prisoners in today’s Latin America,” says Farnsworth.

Eric Farnsworth: In my view, much more can be done and should be done. One involves a unified voice, to call for the release of all political prisoners currently held in Nicaragua. These aren’t just potential candidates for the presidency who have been jailed, but opinion leaders, journalists, influencers, and even former Sandinista supporters of Daniel Ortega who have been imprisoned in a show of force by the regime. There should be no tolerance for political prisoners in today’s Latin America. And it’s not just the United States who should be doing more of this; it should be starting with neighbors in Central America because they are the ones who will be receiving the overflow of migrants from Nicaragua. Unfortunately, both Honduras and Guatemala actually did not support the resolution of the OAS, so charity begins at home and we have to think that Central America can and must do a better job condemning the excesses of the Ortega regime. Others in Latin America—including the pope, who has an outsized voice in these issues, should be speaking out. That’s the first step to show that these actions are unacceptable.

The second, of course, is we all know what the results of the elections will be on November 7: Daniel Ortega and his wife Rosario Murillo. There’s no surprise and no doubt the margin of victory will be large. The international community can and must acknowledge that the elections are fraudulent, that they are occurring under conditions that are in no way democratic, and that, therefore, the results are illegitimate. And based on that, if you refuse to accept the legitimacy of the election results, then that implicates governments to take certain actions to isolate the regime internationally. It’s delicate because you don’t want to harm people who are essentially blameless, but the most potent tool to use in this circumstance is economic pressure. You have to hope and try to structure economic pressure so that it does not harm people in, for example, in the agriculture sector or manufacturing sector, who have no particular say in the Ortega regime. But at the same time, unless you begin to really make antidemocratic actions costly to Daniel Ortega and Rosario Murillo, there will be no incentives for them to change their behavior.

The final thing I would say, of course, is that nothing is occurring in a vacuum, which is to say that the United States has a long history with Nicaragua and whatever one thinks about that, Washington really doesn’t want to have another Nicaragua crisis that everybody thought we put to bed 30 years ago. There isn’t an appetite to engage in these issues in the same way. The world has changed, and other priorities have come to the floor. Nonetheless, we have to bestir ourselves in Washington to really recognize the seriousness of the assault on democracy that Daniel Ortega is currently engaging in and take direct steps to try to delegitimize it. But it’s complicated because the current political moment is challenging.

AS/COA Online: What does this election, and its potential outcome, mean for the rest of Latin America?

Farnsworth: It’s hard to say for the rest of Latin America. Each country, of course, is unique. But I do think how the international community reacts is going to be quite important because there are others with similar inclinations who are watching what happens, and if the Ortegas can get away with this without any particular sanction or negative reaction—from the United States, from the international community, from their neighbors—they might be tempted to engage in similar behaviors. How you react to Nicaragua is going to have broader implications for the region in terms of other leaders who may be similarly inclined.

AS/COA Online: How does China play into this?

Farnsworth: The China story on Nicaragua is actually not very similar to how it plays in other countries and the reason why is because Nicaragua is one of the few countries in Latin America to still recognize Taiwan and does not recognize the People’s Republic of China officially. So, there’s a very strange relationship between Nicaragua and China. You would think that based on the politics and ideology of Daniel Ortega, certainly from the past but also now, that would have been a recognition that Nicaragua would have changed some time ago, but it remains with Taiwan. So, there is no official relationship and therefore China is really focusing its attention elsewhere.

AS/COA Online: The Ortega regime has done everything to make the results of this election a foregone conclusion. What aren't observers paying enough attention to? Are there any surprises we should look out for?

Farnsworth: The thing about this is it’s been like a slow-motion train wreck. We’ve been watching for months how this has been happening and so in that regard, it’s not a surprise at all.

I think there are questions about the public reaction within Nicaragua: Will there be public protests? Will there be loud and perhaps violent clashes? And nobody wants violence, but in that context, how will the regime react? One would anticipate a police reaction and certainly the regime in 2017 and 2018 has shown a very strong willingness to put down protests by force, with violence, and to jail opposition leaders and to exile them—and sometimes people die. That’s something that the regime has done in the past and one would presume that they’d be willing to do the same thing in the future.

The question will be, again: How does the international community react? We’ve seen what’s happened in Venezuela for years, where the Maduro regime has been able to do these types of things and many people across Latin America don’t approve of that behavior but they’re not willing to do that much to change it. We can’t have countries across the region continuing to go down this path. From the end of the Cold War until now, we thought we were on a positive trajectory and at least in some countries in the region, they’re taking backward steps and that’s something that I think should worry and concern us all.

I think that Carlos Chamorro’s comments in our last Democracy Dialogues were spot on in terms of recognizing that the solutions to Nicaragua have to be generated from Nicaragua. We tried in previous years to generate solutions from outside of the country and that doesn’t work on a sustainable basis. It really has to be the Nicaraguans who come to this conclusion and work toward the ultimate result.

The challenge is that the field is not level. The government has all of the resources, including the security forces, and the opposition has almost nothing because the leaders are jailed, exiled, or, in some cases, have disappeared. So, this is not a fair fight, and the opposition needs the support of the international community, but at the same time, that support cannot turn into imposing any sort of final conclusion of what the endgame will have to look like.

That’s really something that Nicaraguans need to determine on their own. In my view, they’re not going to be able to get there under current circumstances because the regime controls all the levels of power, and that’s why it’s essential for the opposition to have the sustained and visible support of the international community.