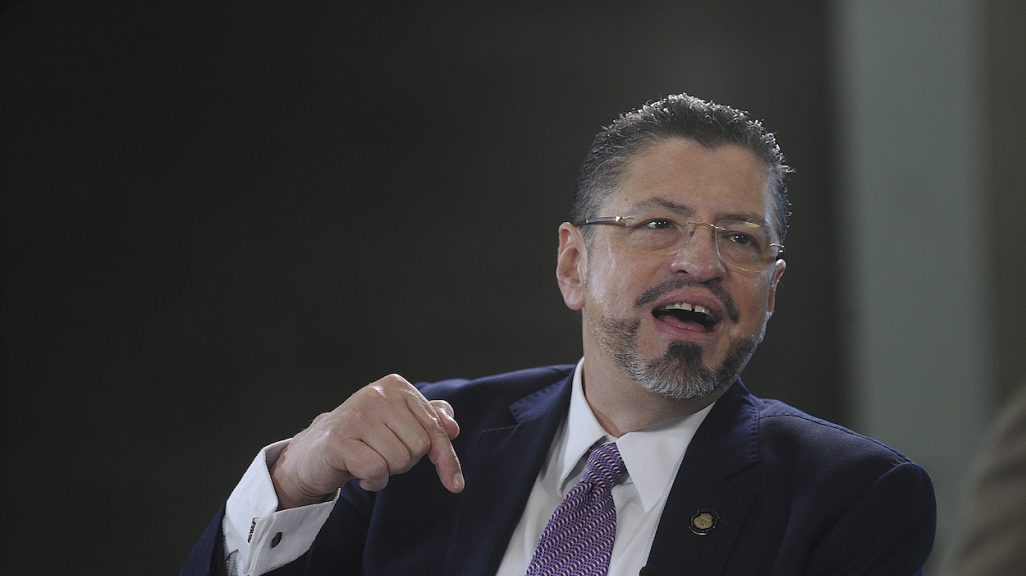 Economist Rodrigo Chaves, a former World Bank official, will be Costa Rica’s next president after capturing 52.9 percent of the vote in the April 3 runoff. In his victory speech, Chaves declared: “Tonight, let's set aside the party colors that can easily divide us. I humbly ask you that we unite beneath the blue, white, and red of our national flag."

After surging in the polls for a surprise second-place finish in the first round, Chaves defeated former President José María Figueres (1994–1998) in the second one. Figueres earned 47.2 percent of votes from the 98.2 percent of reported voting sites. Although the official results won’t be finalized until later this week, Figueres already conceded.

Chaves, who has never held elected office, ran on an anti-establishment message that blamed Costa Rica’s traditional political parties as the source of political dysfunction in the country. To that end, he found a target in Figueres, whose father also served as president and whose political party, National Liberation Party (PLN), was once a dominating force that often swapped control of the reins with Social Christian Unity Party for the majority of the last 70 years. Before the election, 80 percent of voters said that they had a desire for political change.

Chaves, who is from the Social Democratic Progress Party, will be the third president in a row that is not from one of these two major parties. He follows current President Carlos Alvarado of the Citizen Action Party, for whom Chaves served as finance minister for six months.

In terms of policy, there was little to distinguish Chaves and Figueres. As such, one focal point of the runoff campaigns was the alleged scandals facing both men.

During Chaves’ tenure at the World Bank, he was accused several times of sexual harassment and was sanctioned and demoted for his actions. The president-elect blamed a cultural misunderstanding for the allegations.

Not only that but, during campaigns, Costa Rica’s electoral institute accused Chaves of receiving illegal financing.

Still, if Chaves was tainted, so was his political rival. Figueres had allegedly taken about $900,000 in bribes from the French engineering firm Alcatel. Per polling, 60 percent of voters were certain that the claims against Figueres were true, compared to just 40 percent for Chaves.

Corruption was a major concern for Costa Ricans, with 18 percent naming it as their top issue in polling. Chaves blamed past governments for the country’s corruption woes, pledging to battle corruption when he got in office.

Chaves may have played up his outsider role, but it doesn’t mean he drew crowds to the voting booths.

Turnout in the second round hit 56.8 percent of Costa Rica’s 3.5 million eligible voters, making it about 10 points lower than that of the last presidential runoff in 2018. The lack of voter enthusiasm was also seen in the first round, when turnout stood at 59.7 percent—the lowest participation for a Costa Rican general election in more than 60 years. In his victory speech, Chaves acknowledged that abstentionism is "the largest political party in Costa Rica."

The road ahead: Tackling economic concerns

Chaves will be inaugurated May 8. Upon taking office, he will try to deliver on his campaign promises of bringing growth and macroeconomic stability to the country. Costa Ricans rated cost of living (40 percent) and unemployment (21 percent) as the country’s top issues ahead of the election.

Chaves called for an increase in social spending to address economic stagnation, inequality, and rising crime. That’s despite Costa Rica’s $40 billion debt, which is over 70 percent of its GDP, making it the highest level in Central America. In 2021, about 42 percent of the country’s budget went to debt and interest payments.

In early 2021, Costa Rica agreed to a $1.8 billion debt financing deal with the International Monetary Fund. The agreement mandated the country to implement a number of fiscal and austerity measures, though few laws have been passed yet. For his part, Chaves advocates for a new agreement with the IMF and a shrinking of the Costa Rican state. He plans to implement policies to reduce business regulation, reform the pension system, lower the cost of basic goods, and implement some recently passed tax reforms. He's also championed growing trade ties with the Asia-Pacific region.

Chaves will have to face a divided Congress, composed of politicians from six different parties. His party will hold only 10 of 57 seats. Figueres’ party, the PLN, will hold the most seats at 19. Chaves has vowed to avoid conflict with Congress by holding referendums.

See where economist Rodrigo Chaves and former President José María Figueres stand in CIEP polls ahead of the April 3 vote.