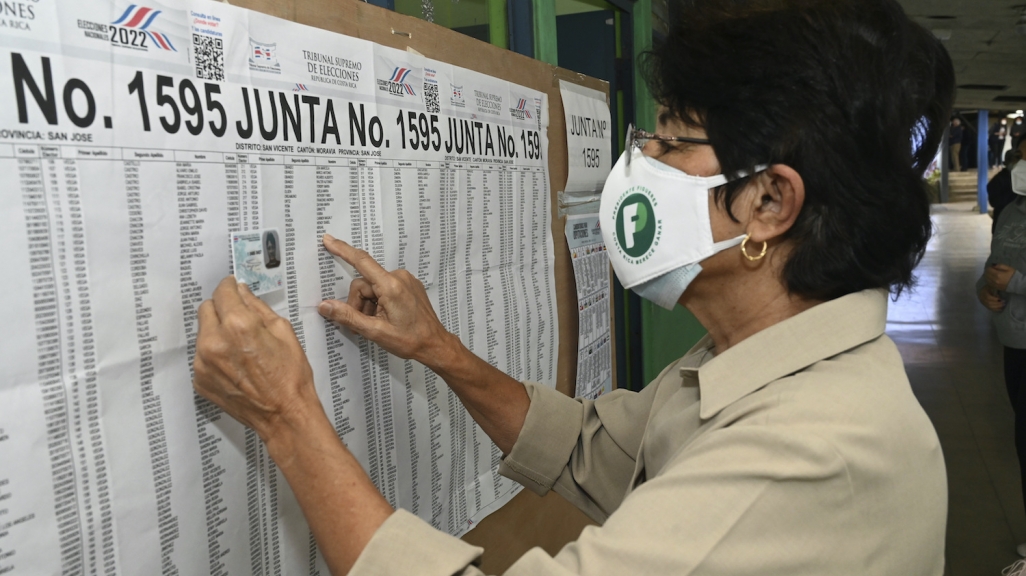 A voter checks her name on the voter rolls in San José. (AP)

Low turnout, relatively New faces in the assembly Looking ahead

Costa Rica's Election Moves On to Runoff amid Low Turnout

A candidate who’d been polling around 5 percent surged more than 10 points in Sunday’s first-round election to snag a spot in Costa Rica’s presidential runoff.

That’s been a repeat story in the country’s last three elections, the latest of which was held on February 6. With 88.2 percent of votes counted, José María Figueres of the National Liberation Party (PLN) stands as the clear winner of the first round with 27.3 percent of votes and is in a solid position to contend for a second term almost 30 years after his first in 1994–1998. His competitor appears to be Rodrigo Chaves of the Social Democratic Progress Party (PPSD), who has 16.7 percent of votes. The two will face each other in an April 3 runoff.

Coming in third was the New Republic’s (PNR) Fabricio Alvarado, who stands at 14.8 percent of votes, well below the 25.0 percent he won in the 2018 first round after riding a wave of conservative opposition to same-sex marriage. Figueres won five of Costa Rica’s seven provinces and Alvarado two.

Next were Lineth Saborío of the Social Christian Unity Party (PUSC) with 12.4 percent of the vote, Eli Feinzaig of the Progressive Liberal Party (PLP) at 12.3 percent, and José María Villalta of the Broad Front (FA) with 8.7 percent. The other 19 candidates—including the nominee from the outgoing administration’s party—all got less than 1 percent each.

The center-right Chaves is arguably better positioned to pick up votes from Alvarado and Saborío on the right and center right, while Figueres, whose party is traditionally centrist with a slight leftist tilt, might be able to pick up more of Feinzaig and Villalta’s left-wing supporters—that is, if they turn out in the second round.

Beyond the horserace, the most notable figure from election day was turnout at 59.7 percent—the lowest participation for a Costa Rican general election in more than 60 years. Voting is technically mandatory in Costa Rica but not enforced. Turnout in the previous six presidential first rounds ran between 65 and 69 percent. Though lower than usual, Costa Ricans’ turnout is still higher than that of many other Latin American countries, particularly among those with voluntary participation.

New faces in the assembly

The incoming legislature will feature six parties, one fewer than the current session. As Tico legislators can’t run for back-to-back terms, just six of the incoming 57 deputies will have served in the Legislative Assembly previously.

The PLN, Figueres’ party, increased its bloc by two seats for a total of 19 legislators. Despite Saborío’s underwhelming performance, the PUSC expanded its caucus by one seat for a total of 10. Alvarado’s newly created PNR is set to pick up seven seats, the same number that his previous party, National Restoration (PRN), currently holds in the unicameral chamber. The FA will have six, up from the one seat Villalta himself holds in the current session. New to the assembly will be Chaves’ PPSD, which secured nine seats, as well as Feinzaig’s PLP, which picked up six. Though they didn’t make it to the presidential runoff, Alvarado and Feinzaig both won seats in the legislature, as Costa Rican law allows candidates to run for more than one position simultaneously.

After eight years holding the presidency, outgoing President Carlos Alvarado’s Citizen Action Party (PAC) lost its every seat in its bloc in the assembly. It therefore disappears from the national government entirely, as will the National Integration Party and the Social Christian Republican Party.

In the fall, Ticos told pollsters they preferred candidates with both political and business experience, as well as those who represent change.

Figueres has the experience in spades but only represents a change in that his victory would mark the PLN’s return to the presidency after eight years of the PAC. Ticos’ familiarity with him from his first term, his presidential father’s legacy from the 1940s, and the longevity of his party gives him enviable name recognition and party machine support. On the flip side, that familiarity could also weigh Figueres down, especially in light of a November 2021 scandal known as Operation Diamond when police arrested four PLN mayors—including high-profile San José Mayor Johnny Araya—on bribery charges.

Chaves has never held elected office, though he did serve for seven months as finance minister during Carlos Alvarado’s term. Prior to that, he worked for over a decade at the World Bank, rising to the level of country manager for Indonesia, but his tenure was marked by persistent allegations of sexual harassment. The bank ultimately imposed an administrative sanction on Chaves and demoted him for “inappropriate behavior of a sexual nature.” A human resources department inquiry did not mention harassment in its findings, which would have resulted in his dismissal, though the agency did issue a “no rehire” flag for him and restricted his access to World Bank properties. Per The Wall Street Journal, the bank informed the IMF security team of these restrictions—a detail that could complicate finding a room to renegotiate a debt deal. For his part, Chaves has said that, “My Latino culture … was interpreted in a subjective manner as inappropriate.”

Costa Rica’s $1.8 billion IMF debt deal looms large over the incoming government. Chaves advocates for a “totally new agreement,” calling the existing one a “tourniquet.” Figueres initially also called for a renegotiation but softened that message later in the campaign. The PLN’s sizable bloc in the assembly will be an advantage in trying to pass legislation to implement reform highlighted by the IMF. A bill that would bring some much-needed, if modest, changes to Costa Rica’s public spending rules has languished in the legislature since 2017.

Amid concerns about debt and unemployment, Ticos vote for a president and legislators on February 6. Learn more and see what the polls say.