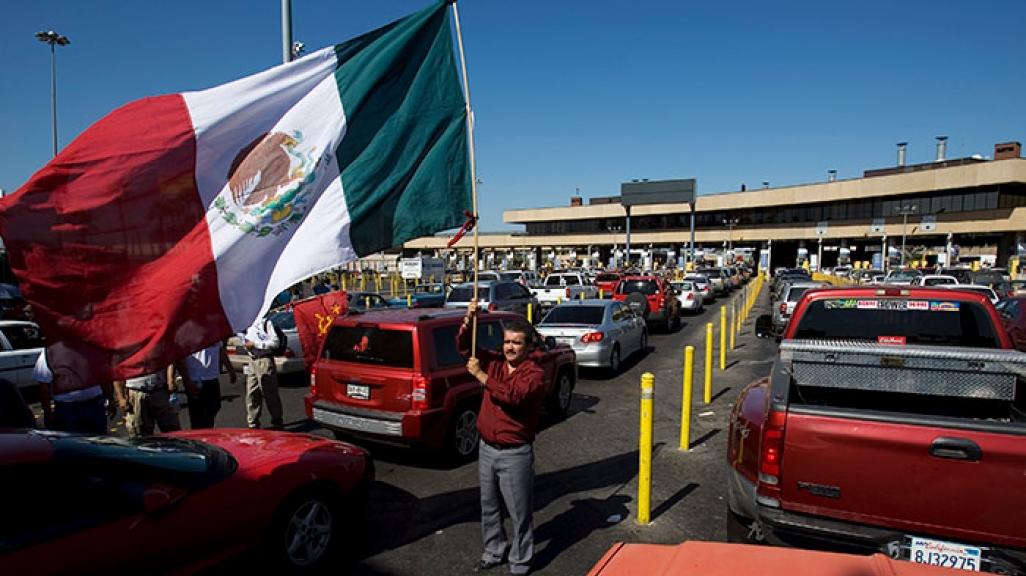 A man waves a flag at the Tijuana-San Diego border crossing. (AP)

Amid unease over NAFTA timelines, we take a look at how relations with Washington factor into Mexico’s July 1 presidential vote.

Earlier this month, Paul Ryan drew a line in the sand for NAFTA: May 17. That’s the date that the U.S. House speaker said the Trump administration needs to submit a renegotiated deal to Congress if it wants the current legislature to approve it.

But the problem with sand is it shifts. Mexico’s top negotiator, Ildefonso Guajardo, indicated early in the week that the deadline wouldn’t be met. And prospects for a speedy NAFTA resolution dim as Mexico’s general elections, Canada’s provincial votes, and U.S. midterms loom.

All this unease about the timeline comes as Mexico prepares for a May 20 presidential debate in Tijuana that will cover trade, border security, and migrant rights. As we enter the final seven weeks of election, AS/COA’s Carin Zissis writes from Mexico City about how North American relations and NAFTA factor into the race.

Mexicans aren’t deciding which way to vote based on Donald Trump’s tweets, but the issue is working its way into the campaigns.

Voters head to the ballot box worried far more about violence, impunity, corruption, and economic issues at home rather than relations with Washington, with a March Consulta Mitofsky poll ranking bilateral ties tenth among election concerns. That’s not to say Mexicans don’t have an opinion on the matter when it comes to the U.S. president’s anti-Mexico rhetoric: their approval of the United States plummeted from 66 percent in 2015 to 30 percent in 2017, per the Pew Research Center.

The result is that the candidates are speaking in tougher tones about the neighbor to the north, even if “Mexicans have bigger fish to fry as they mull over whom to vote for,” as former Mexican Ambassador to the U.S. Arturo Sarukhan wrote last month. Frontrunner Andrés Manuel López Obrador (AMLO) went so far as to launch his official campaign in the border city of Ciudad Juarez by saying that “Neither Mexico nor its people will be a piñata for any foreign government.” In February, Ricardo Anaya, who’s polling second, gave a speech in Washington where he launched a thousand memes by calling the idea that Mexico would pay for a border wall “insulting and unacceptable.” In a recent campaign spot, ex-Foreign Relations Secretary and governing party candidate José Antonio Meade, polling third, called Trump’s threats offensive and said he himself (“yo mero”) will stop him.

Most Mexicans want their country to remain in NAFTA.

Even as positive views of the United States slump, Mexicans see NAFTA in a good light. A February study by pollsters Buendía & Laredo and the Wilson Center found that 59 percent of Mexicans feel the trade deal has had a positive impact on their country’s economy and 66 percent feel Mexico should remain in the pact. Even if Washington decides to remove itself, 56 percent say their country should stay in with just Canada. An El Financiero poll released in early May showed even stronger numbers, with 80 percent of Mexicans saying they agree that Mexico, the United States, and Canada should continue to be NAFTA partners.

Given public support for the accord in Mexico, no candidate here has threatened to quit the deal. AMLO, who proposed his country become self-sufficient in food supplies and is frequently described as a leftist populist, said last month that NAFTA “has had high costs and limited results.” But members of his campaign say he and his party support staying in the deal, and AMLO tapped Oxford-educated Jesús Seade Kuri, a former deputy director at the World Trade Organization, to head negotiations, should he win the presidency and if talks continue past the December 1 inauguration. Seade said in April that “we agree with the central positions” taken by Mexico’s current NAFTA negotiating team.

Meade has said he would fight for the deal, but also said Mexico will survive with or without it. The technocrat says that NAFTA should be used as a tool to trilaterally strengthen infrastructure and institutions.

During a talk with the American Chamber of Commerce of Mexico in April, Anaya said exports to Mexico’s northern neighbor accounted for a quarter of his country’s GDP, adding, “It’s difficult for there to be a theme of greater importance than that of relations with the United States.”

So which candidate leads polls in the northern part of Mexico?

As the candidates ready their talking points and placards for Sunday’s debate in Tijuana, home to Mexico’s busiest port-of-entry with the United States, a new poll hints at a key reversal for AMLO in the north. The relatively prosperous region was a weak spot for the former Mexico City mayor during his losing 2006 and 2012 presidential bids. But an El Financero poll released Monday gives him 39 points in the north—more than double what a June 2012 Reforma poll gave him for the same part of the country and 11 points more than Anaya, his closest rival.