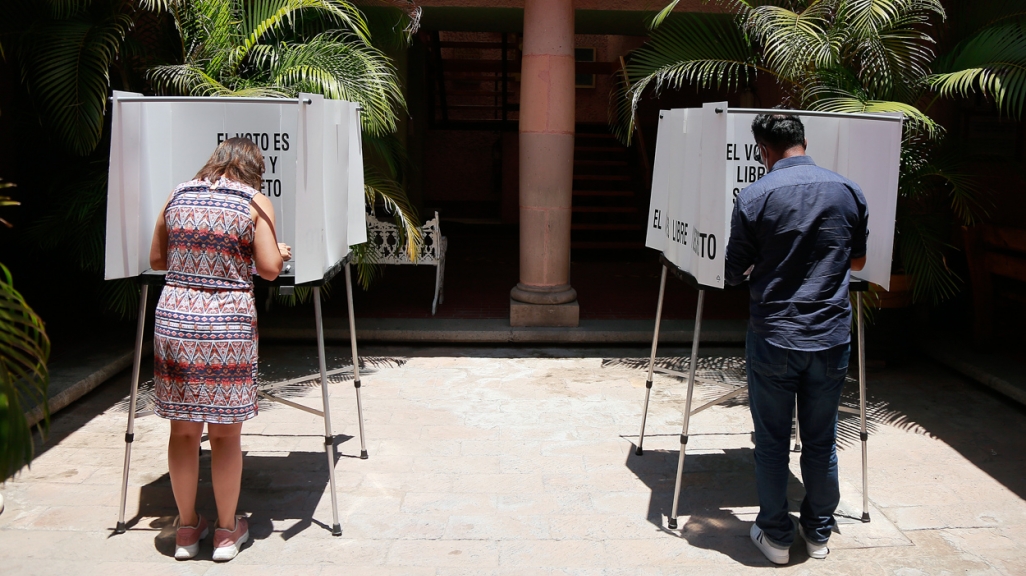 With parties setting sights on the 2024 presidential vote, there’s a lot riding on the six governors’ races taking place June 5.

On June 5, voters will pick new governors in six of Mexico’s 32 states: Aguascalientes, Durango, Hidalgo, Oaxaca, Quintana Roo, and Tamaulipas. The races are scattered across the country, from the U.S. border state of Tamaulipas, to Caribbean-facing Quintana Roo that claims the touristy city of Cancún, to Oaxaca in the south, where López Obrador, or AMLO, commands particularly high levels of support.

As varied as they may be, all six states have one thing in common: None is run by a Morena governor. Governors in Mexico can’t seek reelection beyond their one, six-year term. Polling indicates that the ruling party is likely to win at least four of the seats up for grabs. If it does, a party that was officially founded as recently as 2014 will control two-thirds of the governors’ seats in the country.

Morena’s gains mean losses for Institutional Revolutionary Party (PRI), the once-powerful political machine that held the presidency for seven decades and controlled the governorships of 21 states just 10 years ago. In a rapid reversal of fortune, the PRI could find itself left controlling as few as two nationwide after this electoral round.

The PRI isn’t the only party anticipating losses. At this point, the center-right National Action Party (PAN) is a larger opposition force in the country than the decimated PRI, given that it controls the second-largest number of seats in both chambers of Congress. The PAN controls half of the contested governorships, as well as holding sway through a political alliance in Quintana Roo, but it’s likely to come out of this election with just one victory—Aguascalientes, a state it already controls.

If polling holds true, Morena will continue its expansion of control that started in 2018 with not just AMLO’s victory, but with a largescale rejection of the political status quo, including of the rampant corruption that marked the PRI presidency and governorships. Four years after his electoral win, López Obrador, often referred to as AMLO, continues to command high approval numbers. The shine carries over to his party; a May 2022 Reforma poll found that 65 percent of Mexicans think Morena is the party that helps those in need while the PRI is seen as the party that has done the greatest damage to the country (58 percent) and robbed the most (52 percent).

Of course, there are caveats. Morena has faced scandals of its own, including one this year involving AMLO’s own son and a mansion in Houston. Moreover, observers note that between chapulines (grasshoppers) jumping from one party to another in Congress and senior morenistas—the president included—having political roots in the PRI, some of the prominent faces of the old hegemon keep popping up in the new hegemon.

Then there’s the fact that the governing coalition has faced setbacks. In 2021 midterms, Morena’s coalition also lost its two-thirds majority in the lower house of Congress. That loss weakened the party’s ability to usher through constitutional reforms that are key to the president’s statist agenda, as was seen in the rejection of an electricity reform in April 2022. It also lost most of the districts in Mexico City, once considered a Morena stronghold. But if it faced losses on a federal level last year, Morena made gains in local politics. It currently controls a majority of state legislatures, paving the way for it to ratify constitutional reforms. Morena also picked up 11 gubernatorial seats in the 2021 midterms.

Morena’s widening control of gubernatorial seats is important to keep in mind when looking ahead to 2024 presidential race, given governors’ role in mobilizing the vote. That fact isn’t lost on the early hopefuls seeking to succeed AMLO. Mexico City Mayor Claudia Sheinbaum, Foreign Minister Marcelo Ebrard, and Interior Minister Adán Augusto López have all been touring states to support the morenistas in the running, as well as to position themselves as aspiring presidential candidates.

The debate over party alliances

Ahead of the June votes, most candidates are competing with the backing of coalitions that involve multiple parties. That includes Morena’s Together We Make History coalition and the Go for Mexico coalition made up of the PAN, PRI, and the Party of the Democratic Revolution (PRD)—the latter being AMLO’s prior party and the one from which Morena splintered.

The Go for Mexico alliance worked together on congressional votes and recent elections and is represented in various ways at the state level. But, days ahead of the June 5 vote, series of recorded conversations came to light suggesting the head of the PRI, Alejandro Moreno, engaged in bribery, money laundering, and press threats. In another recording a Morena ally passed along a threat that the governing party would come after the PRI head if he didn't get his party to vote in favor of the April electricity reform. The validity of the recordings has yet to be determined, but the scandal—dubbed "audiogate"—is threatening the PRI's leadership on the eve of the election.

It's also led to rumors that the Go for Mexico coalition could fall apart, although the PAN and PRD reaffirmed the partnership on June 1. For now, the three parties remain joined in hopes of consolidating voter support.

But one party is flying solo. The Citizens’ Movement (MC), which grew out of the Convergence party founded in 1998, controls the gubernatorial seats in two economically important states: Jalisco and Nuevo León. In both the 2021 midterms and this electoral cycle, its candidates didn’t participate in an alliance, drawing criticism from opposition figures who say uniting political forces would help create a bulwark against Morena’s expansion and in defense of Mexico’s democracy.

The MC, which voted alongside the opposition coalition to reject the April 2022 electricity reform, isn’t expected to pick up any governorships on June 5. Still, the party has drawn attention for its own expanding political influence and because one of its members, Monterrey Mayor Luis Donaldo Colosio Riojas, lands third in presidential polling behind Ebrard and Sheinbaum, respectively, and well ahead of any other opposition figure.

The 36-year-old’s name bears the weight of the legacy of his father, Luis Donaldo Colosio Murrieta, a PRI presidential candidate assassinated in 1994 at a moment when party and country were beginning a path to democratic transition. However, Colosio Riojas has expressed reluctance to compete in the 2024 race.