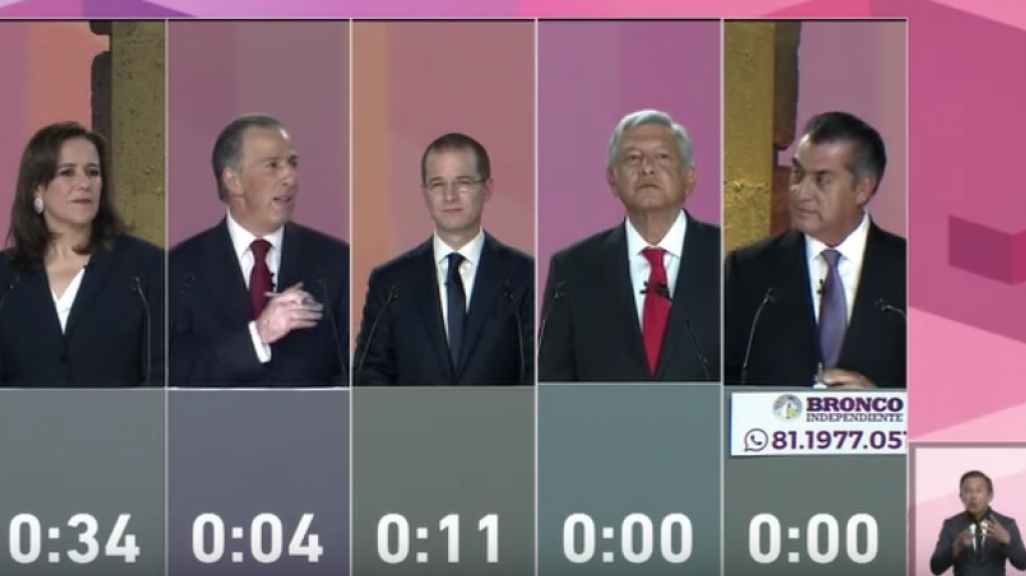 The much-anticipated event was seen as a chance to dent AMLO’s formidable poll lead. Here’s what happened during the April 22 debate.

The anticipation leading up to Mexico’s first presidential debate of 2018 felt akin to waiting for a heavyweight championship fight. Viewers wanted to see if the April 22 five-way faceoff would budge the needle in a race in which Andrés Manuel López Obrador, better known as AMLO, dominates polls. The debate launched a thousand memes, but did it change the course of the competition? In the lead-up to the July 1 election, here’s what was covered and major takeaways from the first of three debates.

The format was broken into three topics: violence and security, corruption, and democracy and vulnerable populations—topics at the forefront of the public’s mind. Violence and corruption have been among top voter concerns. 2017 was Mexico’s most murderous year on record, and the situation isn’t improving in 2018: last month the homicide rate rose 23 percent compared to March 2017. Worn out by one corruption scandal after another, Mexicans see matters getting worse in this area; the country dropped 12 spots in Transparency International’s latest Corruption Perceptions Index to spot 135 out of 180. At the same time, voter discontent runs high, given that 9 in 10 Mexicans say they’re dissatisfied with democracy.

2. Given that AMLO is the candidate to beat, most attacks focused on the frontrunner. He didn’t take the bait.

A big question ahead of the debate is whether a two-person competition would emerge on Sunday, because thus far it’s essentially been a one-man race in which three-time presidential candidate AMLO leads most polls by double digits. The contenders spent much of the night trying to land a punch against a man who seeks to cast himself as the antiestablishment candidate.

AMLO, in turn, clearly knew it was his battle to lose and stuck to talking points such as declines in crime rates in the capital during his tenure as Mexico City’s mayor or the need to help youth with limited economic and educational opportunities. (AMLO polls particularly well with millennials.) But he remained vague on specific policy ideas. For example, he proposed assembling a group of experts—including Pope Francis—to discuss the country’s grave security crisis. He avoided defining what he meant by a pitch made early in his campaign suggesting “amnesty” for organized crime leaders. AMLO, who refused to recognize his 2006 loss and instead set up a parallel government, said he would accept the 2018 outcome but then alluded to the possibility of vote buying and machinations by what he calls the mafia del poder (mafia of power).

In the end, his evasive answers had observers saying AMLO didn’t win any points, but he probably didn’t lose any either.

3. Who emerged the victor for the number two spot?

If AMLO is the one to beat, pollsters and analysts have defined two candidates as being in a race for spot number two, with the victor being the one person with a hope of having a credible chance at beating López Obrador in the single-round vote. Ricardo Anaya, a leader in the opposition National Action Party (PAN) and candidate for the right-left coalition Forward for Mexico, has largely held the upper hand in that secondary race with the governing Institutional Revolutionary Party’s (PRI) José Antonio Meade, an experienced technocrat who’s never run for office and is weighed down by the PRI’s tainted image and low approval ratings.

During the debate, both candidates attacked AMLO, with Meade repeatedly claiming the frontrunner owns three apartments he’s failed to declare, while Anaya—among various barbs—tried to push AMLO to define what he meant by “amnesty.” But the two attacked each other as well, with Meade suggesting Anaya got away with money laundering related to a property deal. Anaya, in turn, listed seven PRI-related scandals, with the punchline being a photo he held up of Meade eating cake with a disgraced former governor while asking his fellow candidate, “How big was your slice of the cake?”

If analysts see AMLO maintaining his position, they also saw Anaya advancing and being the one most likely to take on the frontrunner.

4. One candidate who almost didn’t get a place on the stage hogged the spotlight at several points.

Two independents, former PAN member Margarita Zavala and Nuevo León Governor-on-leave Jaime “El Bronco” Rodríguez, also took the stage. Zavala polls fourth ahead of Rodríguez, but found herself defending against the baggage that comes with her husband, ex-President Felipe Calderón, despite her attempts to connect with female voters and vulnerable populations while making a call for family values.

Rodríguez, meanwhile, almost didn’t get to be a player due to a controversy over fake signatures backing his candidacy. In fact, he wasn’t an official candidate when the campaigns began at the end of March, but a decision on April 10 by the electoral tribunal gave him a pass. Although he polls last of the five, he made a series of statements that drew attention, most notably his suggestion that thieves and corrupt public officials should have their hands chopped off as punishment. He also announced his phone number so viewers could contact him on WhatsApp, held a bullet up on stage, proposed militarizing schools, and deflected a question about whether he is against same-sex marriage by saying he believes so strongly in the institution that he’s gotten married three times.

While many viewed his proposals as outlandish, the ability to steal the stage helped one of the lesser-known candidates grow his profile and play to his base, with many suggesting the cowboy candidate could gain in polls while Zavala is less likely to do so.

An online El Universal poll summed up the debate's results: Anaya was the most prepared, AMLO the most relaxed, and El Bronco the most absurd.

The next debates: The second debate will be held in Tijuana on May 20 and covers trade, border issues, and migration. The third debate takes place in Mérida on June 12 and covers economic growth, inequality, education, technology, sustainable development, and climate change.