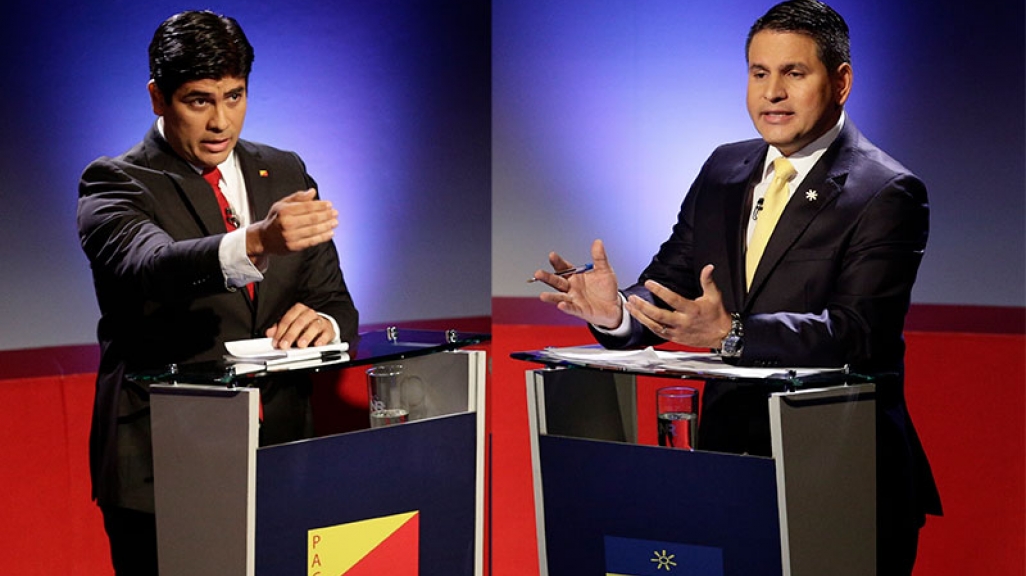 In an election marked by social conservatism, ticos will choose between Carlos and Fabricio Alvarado on Easter Sunday, April 1.

Conservative Congressman Fabricio Alvarado Muñoz won 25 percent of the vote and the first round of Costa Rica’s February 4 presidential election, while ex-Minister Carlos Alvarado Quesada (no relation) received 22 percent to secure the second spot for the April 1 runoff.* Front and center in the rollercoaster of a race is the hot-button issue of gay marriage.

Fabricio, a pastor and contemporary Christian singer, was trailing far behind in the race when he got a boost from an outside source: the Inter-American Court of Human Rights, which ruled on January 9 that Costa Rica must recognize same-sex marriage and other LGBT rights. He took the ruling and ran with it, promising he’d withdraw Costa Rica from the Court. Tico voters—who oppose gay marriage and the Court’s ruling by a factor of two to one—responded, sending him to the top of polls just days before the general elections.

The results from Sunday’s vote, per Fabricio, sent one clear message to the political establishment. “Don’t ever again mess with the family, with our children,” he said at his victory speech.

If Fabricio was looking to double down on his base message, Carlos took the opposite approach: one of reconciliation and reaching across party lines. “We need a government of national unity that respects differences,” he said at his victory rally, in which he acknowledged the efforts of the other candidates and their parties by name. Indeed, his viability in the second round will depend on the degree to which he’s able to expand his base and be seen as not just the Citizen Action Party (Partido Acción Ciudadana, PAC) but the candidate for disaffected voters from the country’s establishment parties.

Antonio Álvarez missed the runoff after coming in third with 19 percent of the vote, making it the first time in Costa Rica’s modern democracy that the candidate from the National Liberation Party (Partido Liberación Nacional, PLN), Costa Rica’s oldest, will not finish in the top two of a presidential election. Rodolfo Piza, the candidate from the Social Christian Unity Party (the PLN’s longtime rival), finished fourth with 16 percent. It’s a remarkable fall for the two parties, who between them had won every presidential election from 1953 until 2014, when Luis Guillermo Solís won on the PAC ticket. Solís’ administration has been dogged by persistent unemployment and ties to a far-reaching scandal known as the cementazo.

After dominating headlines and polls in 2017, the populist outsider Juan Diego Castro came in a distant fifth with less than 10 percent of the vote. In his concession speech, he placed the finger on low turnout for his performance. Turnout in Sunday’s general elections was 66 percent, down from 68 percent in 2014.

This was the second time in recent years a ruling from the international court has upset conservative voters: in 2012, the court ordered the country to lift its ban on in vitro fertilization. It took another four years for the procedure to become legal in the country, and today ticos are split on whether they support it or not. Before the January 9 ruling, the top issue for social conservatives was a proposal by the Education Ministry to teach gender ideology in schools, which Fabricio and five other candidates said they opposed. One group of ticas voted while dressed in costumes from the dystopian novel The Handmaid’s Tale, saying they were doing so in protest of “the fundamentalist threat” in the country. Heightening the religious aspect is that the runoff happens to fall on Easter Sunday this year.

What happened in the legislature?

As of Monday morning, the Supreme Electoral Tribunal had declared winners for only 27 of the 57 seats in the unicameral Legislative Assembly, with Fabricio Alvarado’s National Restoration Party (Partido Restauración Nacional, PRN) and PLN each picking up eight seats and the PAC six. Any gains for the PRN are significant: Fabricio Alvarado was the party’s lone representative in Congress for the 2014–2018 session. Because just one deputy can filibuster a law, Costa Rica’s Congress is particularly unproductive: it takes almost three years to pass a law, according to The Economist. Time will tell if the new makeup frustrates cooperation further or provides opportunities for parties to form new alliances.

*These tallies are with 94 percent of votes counted.