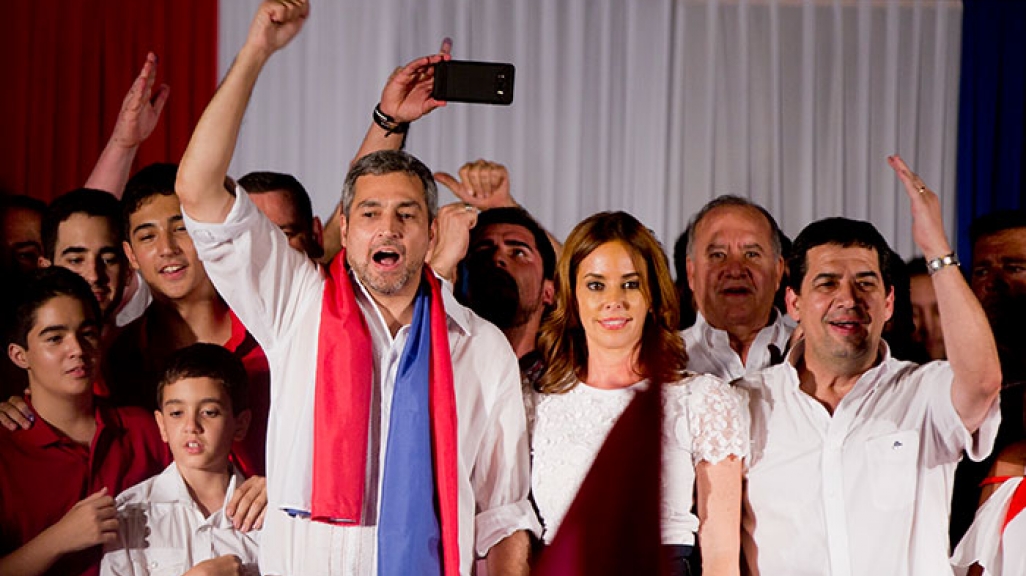 The former senator from the ruling Colorado Party is expected to maintain the current president’s business-friendly policies with reforms to security, education, and health.

On Sunday April 22, Paraguayans elected Mario “Marito” Abdo Benítez in the continuation of the Colorado Party’s rule in the country. At the completion of the president-elect’s single, five-year term in 2023, the conservative party will have held the presidency for a nearly continuous 72 years. With 99.7 percent of votes counted, Abdo Benítez took 46.44 percent of the vote while Efraín Alegre, of the left-leaning Grand National Renovating Alliance (GANAR), won 42.74 percent. While polls leading up to Election Day gave Abdo Benítez a 20-point advantage, in the end he edged Alegre by less than four points. Hugo Velázquez will be the new vice president.

At 61 percent, voter turnout was the lowest since the country’s transition to democracy in 1989. Ultimately, some 2.6 million people voted in the South American country with a population of 6.7 million. On Sunday, Paraguayans also voted for 45 senators, 80 deputies, and 17 governors, and 18 representatives to the Mercosur Parliament.

While official legislative results won’t be determined for another week, exit polls show that the Colorado Party (known officially as the National Republican Association, or ANR) will have the most seats in the Senate, counting outgoing President Horacio Cartes. The party also won 13 of 17 governorships.

Though Abdo Benítez and Cartes hail from the same party, the incoming president was not Cartes’ first pick in the primary for the Colorado ticket. Ultimately the two joined forces in the final stretch of the campaign. Will Abdo Benítez, then, build on Cartes’ agenda? Below we look at the outgoing president’s economic reforms, as well as voter priorities, and where the president-elect stands on each.

On the economic front

Paraguay has seen good economic progress over the last decade, with one of South America’s highest growth rates, according to the International Monetary Fund. From 2008 through 2015, Paraguay’s GDP grew an average of 4.8 percent, second only to Peru among South American economies. The fourth-biggest soybean exporter in the world managed to avoid the 2016 economic contractions faced by Brazil and Argentina, its biggest commercial partners in the region.

Paraguay’s resilience is in part due to the country’s strong soy harvest in recent years—soybeans make up 21 percent of export revenues—and Cartes’ economic reforms, including a fiscal responsibility law that set a limit for fiscal debt, and programs to boost investment via private-public partnerships for infrastructure projects in particular. Abdo Benítez’s platform calls for continuing the country’s macroeconomic stability, keeping business-friendly conditions, and expanding the tax base while maintaining the current 10 percent income tax rate on corporations and individuals alike. He’s also vowed to oppose any legislation that increases taxes on soy exports. But Abdo Benítez’s main pitch to the business community has been a promise to crack down on corruption with the hopes of attracting investors and gaining their trust. While Paraguay has improved its score on the World Bank’s 2017 Global Competitiveness Index every year since 2007, a separate 2017 survey found that executives think corruption is the biggest problem when it comes to doing business in the country.

On security, education, and health

Still, voters are less concerned with corruption, inflation, or jobs than they are with security, health, and education. The latter three were the top three concerns among Paraguayans surveyed by the Centro de Información y Recursos para el Desarrollo (CIRD). In a February poll, CIRD found that 19 percent of citizens were most worried about crime, while in the last elections in 2013, respondents were more concerned with unemployment than with crime. The president-elect has accused the Cartes government of failing to address rising crime and proposes to expand border security and migration controls, refurbish the national police force to deal with street crime, and target efforts against a guerrilla group known as the Paraguayan People’s Army.

Paraguayans are also increasingly worried about their country’s health system, with the topic ranking second for the first time since CIRD’s surveys dating back to 2008. The country has expanded health care access in recent years to cover the poorest communities and indigenous groups, however, weak infrastructure means a lack of hospitals and clinics in rural areas, with 70 percent of medical workers concentrated around the capital. The issue tops the list of proposals on Abdo Benítez’s campaign website, and the president-elect proposes greater integration between the current national health system and local and regional governments, as well as improved focus on primary and maternal health, given Paraguay’s high infant mortality rate of 19 per 1,000 live births.

Similar to the health sector, a lack of infrastructure in education leaves much room for improvement. Currently the country invests just 3.7 percent of GDP in education—one of the lowest levels in Latin America—which Abdo Benítez pledged to bring that figure up to 7 percent, per UNESCO recommendations. The president-elect also calls for incorporating a degree of technological and worker training at the secondary school level to prepare graduates for the workforce. Youth unemployment stands at 12 percent, double the overall rate of 6 percent.