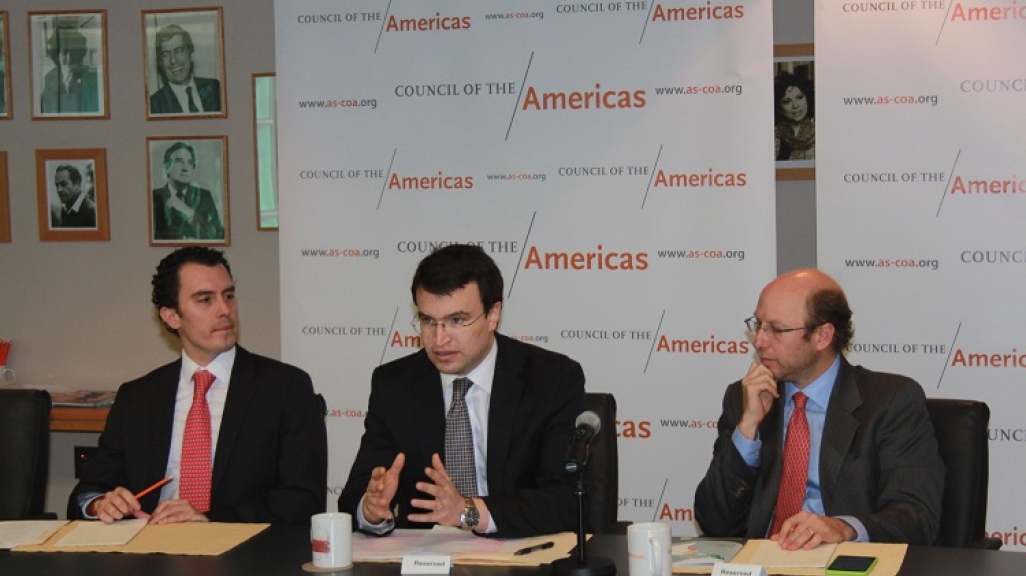 Summary: Launch - An Energy Agenda for the Pacific Alliance

On March 18, AS/COA’s Energy Action Group hosted a public launch of its latest working paper, An Energy Agenda for the Pacific Alliance. COA Director of Energy Christian Gómez, Jr. presented the findings of the paper, followed by a discussion with experts David Yanovich of Cerrito Capital and the Embassy of Mexico’s Hector Castro.

What Are Relevant Energy Essues in the Pacific Alliance?

First, Gómez gave the audience an overview of the founding tenants of the Pacific Alliance, highlighting the importance of energy for Chile, Colombia, Mexico, and Peru. The energy makeup of these countries is heterogeneous: Mexico recently passed an energy reform and is seeing shale gas development, as is the case with Colombia. In addition, Colombia has increased its production of oil but, due to the low oil prices, is experiencing a fiscal hole. Peru and Chile do have not large hydrocarbon resources but are working on renewable energy development. Despite energy being an important subject, the topic has not yet sparked cooperation among the countries, whether because of political and economic relations, geographic distance, or other reasons. However, the precedent set by the harmonization of alliance members’ stock exchanges via Mercado Integrado Latinoamericano (MILA) is an encouraging precedent for supporters of energy integration.

Maximizing the Energy Potential of Mexico, Colombia, Peru, and Chile

According to Yanovich, the main problem for energy integration is not distance, nor is it technical; it’s politicians. However, Yanovich affirmed that energy cooperation is a feasible task. The Cerrito Capital partner also emphasized the need for regulatory coherence, all while stating that governments must allow the private sector to work in a level playing field. The private sector needs to participate in financing, and in this aspect, MILA could be taken as an example of a best practice for integration.
Another important tool is to have a common global diplomacy, and act as a unified bloc when it comes to energy issues.

However, Castro stated that it does make sense to discuss the energy sector from a regional perspective. There are more than 40 companies interested in investing in Mexico’s energy sector, and there have been profound changes in power generation. With an increased emphasis in renewables and a commitment to mitigating climate change, Mexico stands to gain from energy integration.

The paper’s findings show that regulatory issues are important. Water is a source of energy for many Pacific Alliance countries and lends itself well to renewable energy. The problem with hydroelectric is the drawbacks in regards to indigenous populations and environment. The Pacific Alliance countries also have potential for geothermal, solar, and biomass energy generation and are trying to set up a range of incentives whether it be tax breaks in Chile, or through other mechanisms. All of these are indicators that the Pacific Alliance has the potential to be highly competitive in the energy sector.
The paper also outlines several recommendations, including the following: the creation of stronger internal markets, which in turn enhances competitiveness; the harmonization of regulatory frameworks, which leads to greater connectivity, and is a precondition for deepening integration; cooperation between energy ministries, with the private sector to promote best practices; the creation of a shale gas council, with Argentina and Brazil as observer countries; a development bank that would promote and finance energy projects should also be on the table; and, finally, that workers should be able to work in any country with the possibility of a regional labor pool.

You can watch the full event video here.