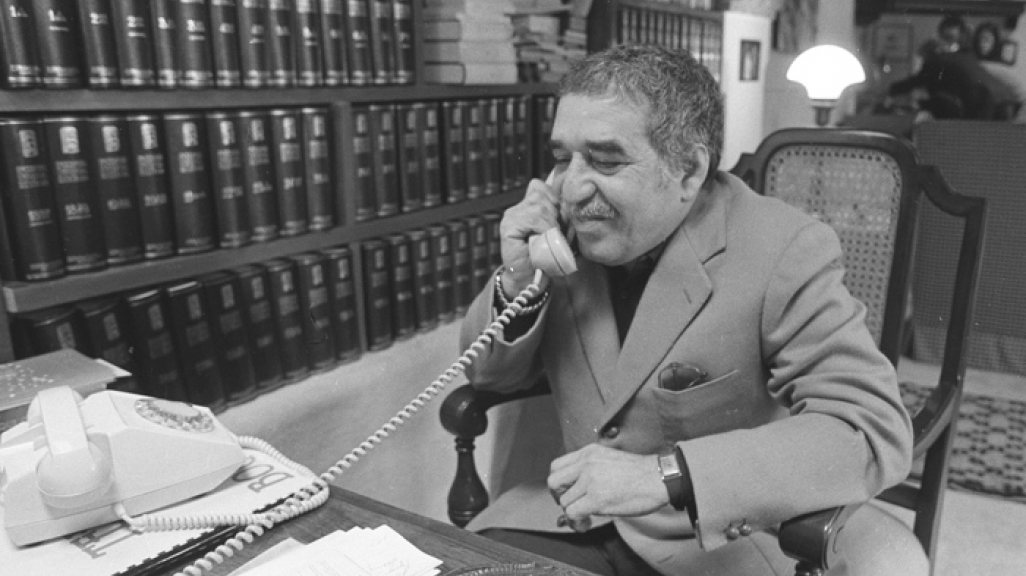 The Colombian writer served as a role model for reporters throughout his life. AS/COA's Adriana La Rotta chronicles his journalistic career and her experience working with him.

My first brush with Gabriel García Márquez was in the archives of El Espectador, the Bogota broadsheet where he published in the mid 1950s and the place where 30 years later I, too, aspired to launch my career as a newswoman.

Gabo, as he was universally known, had left the newspaper many years before and by the time I was hired as a pup reporter, he was already a world-acclaimed novelist and Nobel Prize winner. However, his presence in that newsroom was overwhelming, and not just because he stared back at us from black-and-white photographs that seemed to hang in every corridor and meeting room. His news stories, features, and movie reviews would jump out at us as we rummaged through dusty editions of the newspaper in the second-floor archive. The other young news assistants and I felt we walked in the shadow of a giant. We were in awe of his meticulous reporting technique and a deceptively fluid prose style, which disguised the painful labors of a committed wordsmith.

García Márquez anecdotes were the stuff of legend in that newsroom, particularly among the old-boy editors who had worked elbow-to-elbow with him and who regaled us with stories of his outsized talent. He served as a model and an inspiration for every young Colombian reporter who aspired to replicate his ability to transform the most mundane news event into something that transcended journalism.

Telling the Tale of a Shipwrecked Sailor

One oft-repeated tale was a story of a Colombian sailor who had fallen overboard from a navy destroyer and who remained adrift for 10 days, clinging desperately to a flimsy raft with no food or fresh water until he finally washed ashore on a Caribbean beach. This extraordinary story of endurance and survival commanded the Colombian media’s attention for a handful on days until, as is so often the case, the news train moved on and the poor forsaken sailor was forgotten. That was when García Márquez decided to revisit the story and produced a riveting first-hand account titled “The Story of a Shipwrecked Sailor” that was published in 14 consecutive daily installments under the sailor’s byline. García Márquez’s retelling of the story turned out to be so successful that El Espectador had to double its circulation to satisfy the demand of readers who, for two weeks, crowded outside the front gates of its printing press, snapping up the still steaming editions of the newspaper.

Here is what impressed those intent on learning Gabo’s reporting technique: before stitching his story together, he subjected the sailor to 20 separate six-hour interview sessions to ensure he had noted every detail of the maritime saga. Several years later, when the articles were published in book form, García Márquez confessed that the story was so improbable, he had feared the readers would not believe it had ever happened.

A journalist by day, Gabo would remain in the El Espectador newsroom late in to the night to work on his fiction with only the sound of the printing presses for company. "I liked the noise of the Linotype machines, which sounded like rain," he would recall many years later in an interview published in The Paris Review.

Despite his literary achievements and international celebrity, García Márquez remained deeply committed to journalism. This passion was driven in part by his impatience with what he perceived as the lazy habits of Latin American journalists. But it was equally fueled by his concern over the troubled history of the continent and his desire to influence the political debate.

He put his money where his mouth was and over the course of several decades he invested in a handful of Latin American news ventures. He also became an important mentor for young journalists through the efforts of his Fundación para un Nuevo Periodismo Iberoamericano, a journalism school based in Cartagena where writing courses have been taught for over two decades.

His first business project was a left-leaning Colombian news weekly titled Alternativa, published in Bogota. Alternativa folded after six years from what one of Gabo’s then partners described as “physical, economic, and ideological exhaustion”.

In the Newsroom with Gabo

I was fortunate to be both a witness and participant in his second journalistic enterprise, a half-hour weeknight television newscast called QAP launched in 1992, which for a period of five years became recognized as the most groundbreaking news program on Colombian television.

I recall the months leading up to the launch of the program being a whirlwind of creativity and excitement. Gabo would parade around the newsroom, asking young journalists what they were working on or remarking on their copy as he peered over their shoulders. I was the program’s main anchorwoman and kept pinching myself to ensure it was true that I was working for one of the most beloved authors of the twentieth century.

On our debut night, half an hour before we went live, Gabo walked up to me as I was sitting behind the anchor’s desk and asked whether I was nervous. I wanted to tell him that my legs felt like jelly and that despite the fact I had to remain seated so that the technicians could correct the sound and the lighting, I could barely resist an overwhelming urge to dash out the front door and disappear.

“Very good,” he responded before trotting away.

I was told he then locked himself into a second-floor studio to watch the show on his own and that when he stepped out after the last credits had rolled, he was beaming.

Gabo itinerant lifestyle and international commitments meant he was not a permanent fixture in the QAP newsroom. His main role was as a sponsor and an investor, leaving the day-to-day management of the program to a capable team of senior editors. However, on those days when he unexpectedly turned up it was as if the spirit of the Caribbean had swept in behind him and a cloud of glittering yellow butterflies engulfed us. He was a good-natured, disruptive force in the newsroom, prone to suggest budget-breaking assignments, such as one time when I was unexpectedly ordered to fly off immediately to interview a newly installed Central American president.

Sadly, QAP succumbed in Colombia’s poisonous political environment after it reported that then-President Ernesto Samper had relied on drug money to fund his campaign. This prompted Gabo to find a new outlet for his journalistic ambitions. That turned out to be Cambio, launched in 1998, which was his second attempt at a weekly news magazine and revealed how his politics had drifted toward the mainstream. Still, he remained as committed as ever to enabling a more pluralistic debate across the Colombian political spectrum.

It must be said that none of García Márquez’s journalistic enterprises resulted in commercial success, with the one exception being QAP. But Gabo did not appear too troubled by this and, over the years, he continued to be generous with his patronage and support of other journalists.

Digging into the Story

Evidence that he remained a journalist to the core came in 1996, when he published News of a Kidnapping. The book is a gripping narrative of how Colombian drug-lord Pablo Escobar seized a group of well-known personalities in an attempt to blackmail the government into stopping his extradition to the United States. News of a Kidnapping is one of the most revealing accounts of Colombia’s powerful crime cartels. Asked what prompted him to write a book so different from his fantasy-filled novels, García Márquez said that he was exasperated by Colombian journalists’ inability to dig into a story that he thought deserved to be told.

Although widely celebrated for his extravagant imagination and his universe of improbable and supernatural characters, García Márquez refused claims of genius and described himself as a mere literary craftsman. “Writing something is almost as hard as making a table…Basically very little magic and a lot of hard work are involved,” he said.

And hopefully that is a lesson that endures for thousands of aspiring journalists across Latin America who, many years later, as they face the blank screen of their laptops, will remember Gabriel García Márquez’s remarkable journalistic talent and try to emulate him.