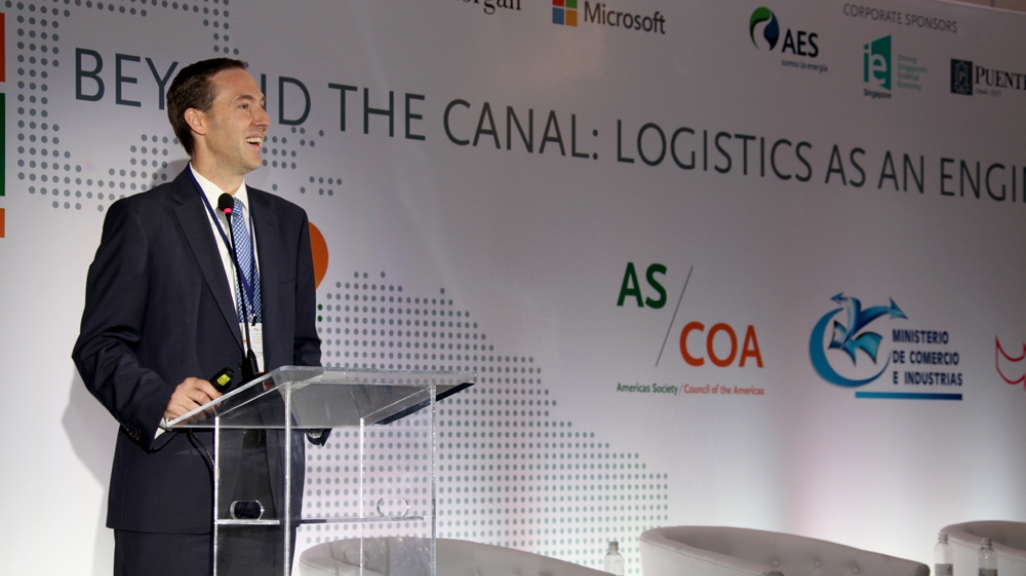 Recap: Panama City 2016 – Beyond the Canal, Logistics as an Engine of Growth

With the recent Panama Canal expansion, the isthmus country is primed to become a global shipping hub.

Panama is more than a shipping point; it’s a global trading hub on par with Singapore or the Netherlands. AS/COA Vice President Randy Melzi presented this vision for the country during opening remarks at the 2016 Latin American Cities conference in Panama City. Key to realizing that vision is the isthmus country’s transportation and logistics sector, which is already healthy: it averaged 8.9 percent annual growth in the past five years—a full 18 percent of total GDP in 2015. Melzi lauded the country’s efforts to improve mobility in the capital city by expanding its metro line. “A country can’t really be productive if its workforce has to sacrifice sleep and family time getting around traffic problems,” she said. Amid global and regional uncertainty, the Panama Canal expansion is an example of Latin America growing and adapting to the global context, and doing away with decades of confrontational ideologies.

In a show of complementary ideologies, the ambassador of Panama to the U.S., Emanuel Arturo González-Revilla, and his U.S. counterpart, John D. Feeley, were up next in a conversation with AS/COA Vice President Eric Farnsworth. The United States sees Panama as “almost the perfect crystallization of a democratic partner committed to open markets,” said Feeley, who reiterated more than once his goal to have his country be the number one source for Panamanian foreign direct investment.

González-Revilla highlighted how important U.S. trade was to the expanded canal: 85 percent of all goods shipped through will be coming or going to the United States, he said, up from 69 percent pre-expansion. The potential for shipments of liquefied natural gas (LNG) was particularly key, a fact Feeley highlighted as well. The most important ship through the expanded canal was not the first one, he said, but the second: an LNG tanker going from the U.S. Gulf Coast over to Japan.

The two also commended Panamanian President Juan Carlos Varela’s commitment to transparency in light of the so-called Panama Papers event. Feeley spoke more broadly about the anticorruption wave sweeping the hemisphere: “There is clearly a movement in the street,” he said, that is fueled by social media and shaking up “a lot of the cozy historical arrangements between the elected and the economic elites.” He continued, “We’re going to have to deal with the fact—and I believe it’s a very healthy fact—that elected leaders are simply going to have to be more accountable, more transparent, and more honest with populations about what is happening with foreign direct investment dollars or tax dollars.”

"The Canal is something that unites us all." - Ambassador Gonzalez-Revilla #BeyondtheCanal

Feeley: "My embassy lives off of Amazon Prime."

Next up was Panama’s newly appointed commerce and industry minister, Augusto Arosemena (download presentation). The minister highlighted a score of infrastructure investments made by Panama in everything from airports—Tocumen International has the highest number of direct international flights in Latin America, he said—to fiber-optic cables. But his ministry wasn’t stopping with the canal expansion, he said, going over opportunities they see to develop a shipping terminal devoted to LNG tankers, and a roll-on-roll-off terminal for easy shipment of large cargo-like cars. He added that his ministry sees the most potential for growth not just in logistics, but in energy and mining, too. The country expects mining commodities to be the country’s top export sector by 2018, and for 70 percent of its energy to come from renewable sources by 2050.

Finally, Arosemena stressed that all of the progress would be for naught if the country didn’t also invest in workforce education so that workers have the skills needed by today’s businesses.

The day continued with a panel on logistics and economic growth moderated by CAF’s Susana Pinilla, with the participation of Juan Carlos Croston of the Manzanillo International Terminal, Joseph Fidanque III of the Tocumen International Airport, and Ricardo Ungo of the Panama Canal Authority. Ungo anticipated more ships and cargo thanks to the Canal expansion, but was cautious about where to look for their benefits. “The canal only contributes 6 percent to the country’s GDP,” he said, “but related industries supported by the canal activity represent one-fourth to one-third of the country’s GDP.”

Croston agreed, saying, “The canal is the highway and we’re trying to capitalize on its added values.” When asked about the competition faced by the port of Manzanillo, Croston said: “It’s impossible to stop other ports from modernizing. If you had a restaurant, it would make no sense to try to stop other restaurants from being built. What we can do is offer a better menu to attract more clients.” For his part, Fidanque said that many businesses arrive to Panama thanks to the connectivity hub that is its main airport, and he added that officials from medium-sized cities across the country had contacted him to determine how to get more flights and investors to their areas.

Francisco Ríos of IE Singapore gave a presentation (download) comparing the South East Asian nation to Panama, and arguing that the Central American country could learn a few lessons from there. Despite being a young country—its independence only came about in 1965—Singapore is now the third-largest financial center in the world, he said. He argued that this change was due to a shift from a "manual economy to knowledge-based labor." Ríos also said that Panama and Singapore are two similar hubs at opposite sides of the world, with similar population numbers, impressive maritime and aviation infrastructure, and similar trade numbers. However, while Panama has more flights and sea routes, Singapore still trades more cargo. Ríos also proposed a "hub-to-hub" partnership to strengthen the commercial ties between the two countries.

The canal expansion will be an important boost to Panama’s economy going forward, Economy Minister Dulcidio de la Guardia said in his presentation (download). It will allow Panama to continue its high levels of public investment while reducing the fiscal deficit, as the expansion will increase the canal’s state contribution by 45 percent.

With one of the highest economic growth rates of the region, Panama has also made much progress reducing poverty. The minister noted that for the first time in 27 years, the country’s GINI coefficient fell below 0.50.

The World Bank’s Humberto López delivered a lunchtime keynote (download presentation) covering Panama’s economic performance and how the country ranks in his agency’s Logistics Performance Index. In the first case, he noted that Panama is Central America’s leader in terms of economic growth and provided a historical context dating back to 1960 that shows how the country’s growth rates surged over the past decade.

Moving on to the logistics index, López reported that Panama ranked fortieth out of 160 countries in 2016, reaching its highest level yet in the survey. The country also ranked in the top ten of upper-middle-income countries.

Participants shared an overview of how the digital revolution changed information access on global and local levels. Ripoll pointed out four factors that make Panama a strong candidate for digital innovation and investment: stability, human resources, connectivity, and geographic location. He urged the public and private sectors to work alongside universities to develop human capital in this field. Suarez pointed out that, thanks to the way information is distributed in the digital era, talent can be found anywhere—not just in Silicon Valley. That talent needs to be fostered for Panama to have a Silicon Valley of its own. Echoing these thoughts, Halman said Panama has to get over its fear of if it can be globally competitive when it comes to digital innovation. 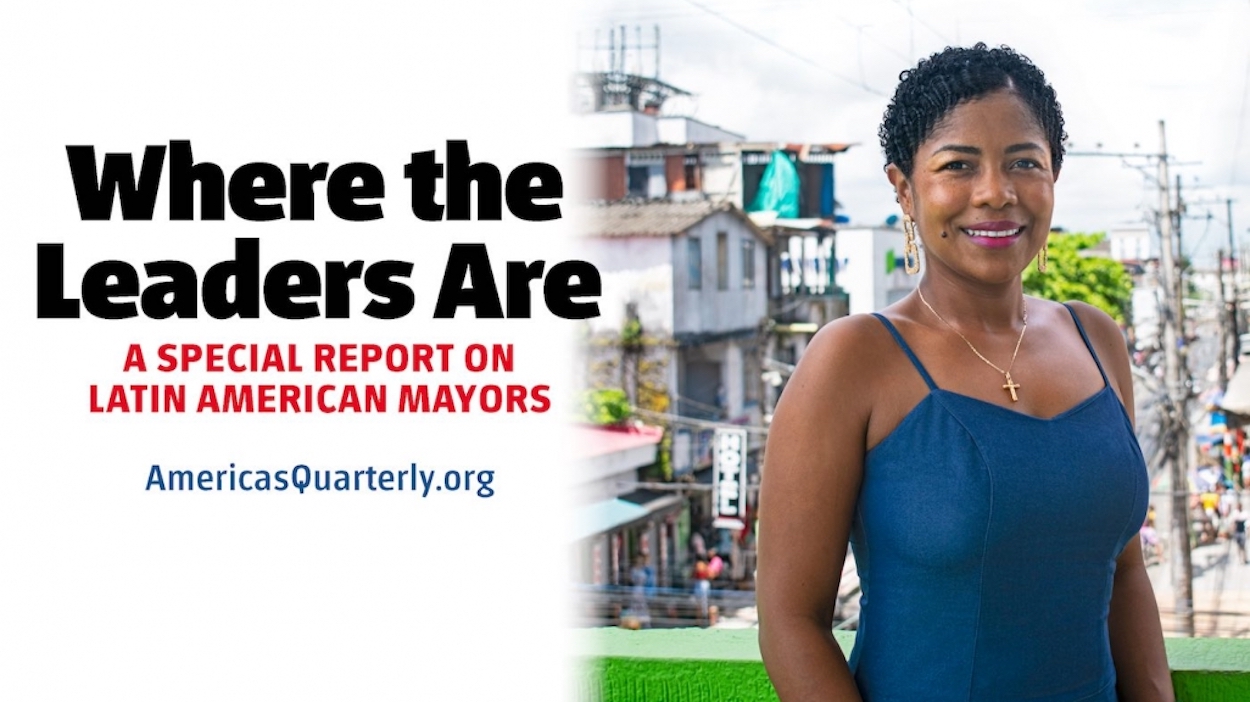