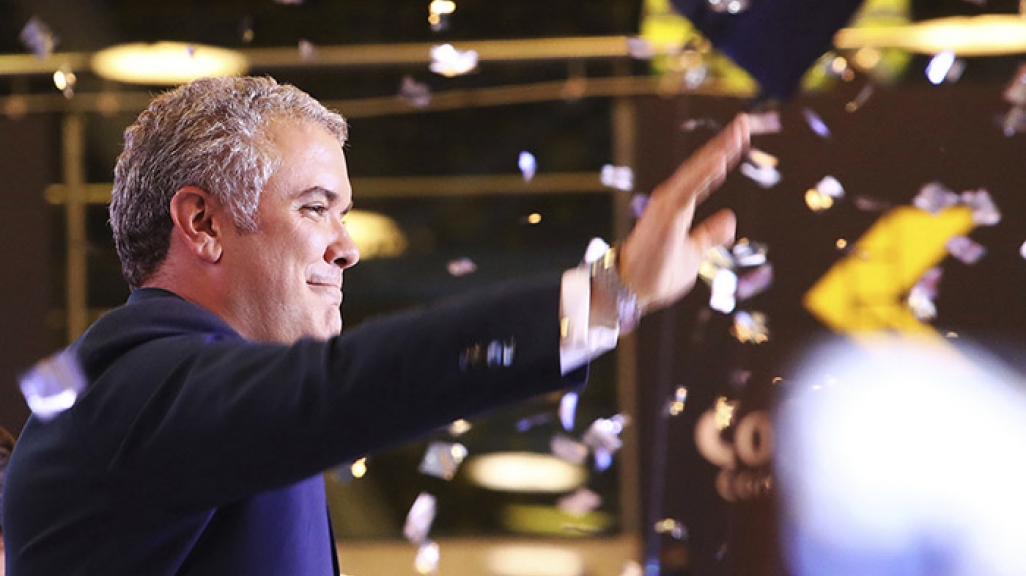 Q&A with Adriana La Rotta: "A New Paradigm" in Colombia with Duque Victory

Colombia's next president "stands in a really good position to heal the polarization that marked the campaign," says La Rotta, head of AS/COA's media relations and an El Tiempo columnist.

On June 17, Colombians picked Iván Duque as their next president. A conservative senator who was selected as the Democratic Center's presidential candidate, he snagged roughly 54 percent of the vote, compared to about 42 percent for the leftist ex-Mayor of Bogotá Gustavo Petro.

What comes next? Duque is a relatively green politician. Only 41 years old and with limited political experience before winning a Senate seat in 2014, the president-elect ran with the backing of influential Senator and former President Álvaro Uribe, who will lead the party in the Senate. Adriana La Rotta, AS/COA’s senior director of media relations and a columnist with Colombia’s El Tiempo, shared her perspective on what the future holds for the young president and the country he will lead.

Learn more about the elections in Colombia's Election Guide.

AS/COA Online: What is the significance of this election, and what insights can we glean from what happened yesterday?

Adriana La Rotta: You had two oppositions against each other: the Democratic Center as an opposition to the current government and Gustavo Petro as an opposition to the system. So what we saw yesterday was a phenomenon that is quite new in Colombian politics, because the left was always equated with the guerilla. With the peace agreement, the left became normal. In that sense, Colombia’s a more normal democracy, where you have two different parties with different ideologies, as opposed to the past, where you had two different parties, both belonging to the establishment.

The main element in Iván Duque’s victory is that he was chosen by Álvaro Uribe, and Álvaro Uribe is by far the most important figure in Colombian politics. But Iván Duque is also a fresh face. He’s seen as a technocrat and modernizer. His coalition was very diverse. He had an image of being young, modern, and willing to unite the country and take it to a different place. So, all those ideas convinced the electorate more than Petro, but Petro got 8 million votes, which is outstanding for a left-leaning candidate. Petro is going to be a senator, and he’s going to be very vocal. He will try to become the opposition in Colombia and continue mobilizing his base in the lead-up to the next election in four years.

AS/COA: One of the issues at the center of the campaign was the future of the peace agreement with the FARC. Duque was very vocal in his opposition, as has been Senator Uribe. What are some adjustments Duque might make to the peace agreement, and what will that mean for any future negotiations with the ELN or any other rebel or narcotrafficking groups?

La Rotta: The aspect he seems keen to change is that FARC’s leadership doesn’t get time in prison. He wants to see tougher punishment. The new Congress takes office on July 20, but none of the FARC's 10 members of Congress have gone through the transitional justice program. To many people, it is difficult to see them in Congress without their having gone through transitional justice. That will probably happen, because Duque will become president in August.

There is also a contentious issue regarding land. Eight million people were displaced, and people acquired the land they left behind. Land restitution and the rights of past owners and current owners is another aspect he wants to change.

The bigger issue is the extent to which Duque wants to make the first months of his presidency about the peace agreement, which is something like the eighth item on Colombians’ list of priorities. Does he want to really get involved in that particular issue and make the narrative around his new government the renegotiation of the peace agreement? Some people believe that would be a step back, and it would take away the momentum he has to make other urgent reforms.

AS/COA: What are some of the priorities Colombians would like to see Duque spend his political capital on?

La Rotta: Growth is a huge priority. Commodity prices have been very low for the past year, and people need more formal jobs. Education is a priority, and so are anti-corruption efforts. Colombia is one of the most unequal countries in the world. Also security: we’ve gone from 80 murders per 100,000 inhabitants to 24, which is a huge improvement. But still, Colombia is high on the list of the most violent countries in the world.

AS/COA: Many people see the president-elect as a puppet of Uribe. Are there areas the new president might strike his own course?

La Rotta: Clearly, Duque will be president because he was Senator Uribe’s candidate. Uribe is formidable. He’s going to be the head of Congress. The president in Colombia has a lot of power and is very strong, but all the reforms Duque wants to implement, he will have to push through Congress. Duque has a great opportunity, but the way he manages the opportunity will mean everything.

AS/COA: Roughly 800,000 voters, or 4 percent, cast null votes. What role will these voters play going forward, and is there a leader of the moderate opposition in Colombia?

La Rotta: This is the first time the null vote has been significant. They will have representation in Congress through different parties. The question is whether Petro will consider those moderates part of his opposition and whether they will act in block or independently. There is opportunity for the center to grow. Next year, there will be elections for mayors and gubernatorial races. The role they play will be to put checks and balances on the extremes. They actually did it; the center made both Petro and Duque moderate their speech between the first- and the second-round elections. Hopefully, they will have real power moving forward to next year’s elections, but in the meantime, centrists will have a voice bringing moderation to both the right and the left.

AS/COA: Colombia continues to see significant drug trafficking and violence. Many farmers have no alternatives to cultivating coca and are displaced by gangs and narcotrafficking groups. Does President-elect Duque have specific plans to address these issues?

La Rotta: We will see a return to tougher policies on drugs. Duque said he will go back to aerial aspersion, which was suspended under President Santos’s administration because it really is not effective. It has a huge impact on other crops people depend on for their survival, and it has a health impact on the population.

Crop substitution goes at one speed, and forceful eradication goes at double the speed. One of the problems the current administration has had is that it has implemented both methods, but it doesn’t work. In order to do substitution, you need time for people to subscribe to the program. You need to make the transition, find markets, and have infrastructure ready to take products to where buyers are. There has been good will in implementing voluntary eradication, but the other pieces are not there. That’s a tragedy.

So, we will see a tougher stand, forceful eradication, and fumigation with chemicals. It’s a step back to the old way of combating coca production, which has been a failure. It’s also attacking the weakest links in the chain. It’s what we saw under President Uribe’s administration, and in the eyes of the U.S. and other people, it was a very successful strategy.

AS/COA: Some 600,000 to 800,000 Venezuelans have crossed the border into Colombia. How do you see Duque navigating this situation with Venezuela and the Maduro government?

La Rotta: It’s a humanitarian crisis. It’s not really a Colombian problem; it’s a regional problem. I don’t really see what different policy Duque can implement. Colombia is doing what it can. President Santos has been very careful not to make the bilateral relationship a domestic issue in Venezuela. Venezuela’s presidents try to make Venezuela a contentious issue so they will capture popular support, and Colombia has always been very careful not to become the reason the regime becomes stronger. I’m sure Duque is aware of the risk of toughening up his stance against Venezuela but becoming the excuse for Maduro to become even more entrenched in power.

The international community is not aware of the magnitude of this tragedy. Colombia can push for Venezuelans to gain status as refugees. If that happens, the United Nations would give a budget for those refugees to be taken care of in Colombia. That’s something that is not happening. Colombia is just welcoming and using whatever budget they can to feed them and give medical services. It’s all very informal, but at some point, they will become official refugees, the international community will become more involved, or there will be a regional effort to push Maduro out of power. All those are options. I don’t see what novel, different solution Duque has to deal with it, because no one really has the solution for Venezuela. It’s a complex and difficult situation to resolve.

AS/COA: Last week, you spoke at an AS/COA conference on the relationship between Wall Street and Colombia. How does the financial community view President-elect Duque, and what are some areas of investment international investors might be looking to in Colombia?

La Rotta: There are a lot of commonalities between the international investment community and what Duque wants to implement. He’s very aware that the fiscal situation in Colombia has to be controlled. It’s a huge challenge, because on the one hand, you need to spend in order to bring social improvements that people are waiting for, but you also need to run a very tight ship if you don’t want to hurt your reputation abroad. It’s not going to be very easy, because the Colombian government's sources of revenue are not very clear. Duque has promised that taxes will go down for the private sector so they are able to grow and create more jobs. He’s very keen to continue developing the oil and mining sectors. It’s very traditional and in line with the emphasis President Santos put on the economy. There is not really a huge change between the previous government and this government. It’s a very private-sector, international investment kind of mentality.

AS/COA: Is there anything else worth noting as Colombia goes forward under a new administration?

La Rotta: I think we will see more social mobilization, and Petro will be part of that. I think he has seen what social mobilization can achieve in other countries in Latin America, and he will push for an agenda where people feel emboldened to go out and protest. That is an aspect the new president will have to manage very carefully. It’s a new paradigm in Colombia. Duque stands in a really good position to heal the polarization that marked the campaign and bring Colombia into the future.

The other new element is that the vice president is going to be a woman—Marta Lucía Ramírez. She was minister of defense and minister of commerce, so she has command of all the issues, and I’m sure she’ll have a big role in government.

Expectations are high and positive. We’re standing at the point where we can go to the future or return to the past.

The interview was edited for length and clarity.