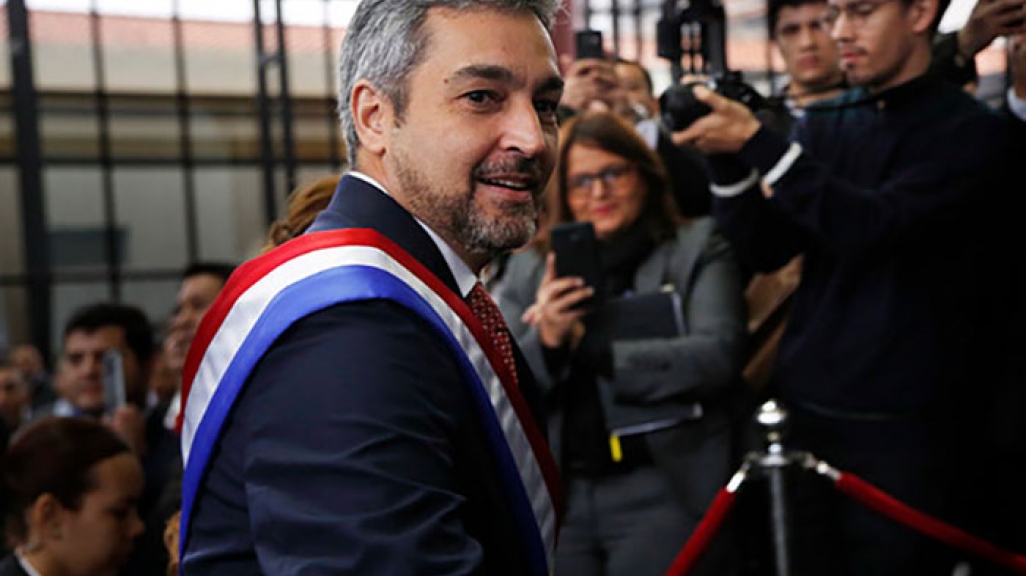 The president marked the anniversary of his first year by staving off impeachment.

President of Paraguay Mario Abdo Benítez completed his first year in office on August 15. His Colorado Party, which has governed the country nearly continuously since 1953, holds—at 17 of 45—the largest number of Senate seats, and has just over half the seats in the Chamber of Deputies. Still, the president doesn’t have the same popular support that his predecessors did. He won the election by less than 4 points, the smallest win margin since Paraguay’s 1989 return to democracy. An August CIES poll put the president’s approval rating at just over 30 percent. By comparison, his predecessor Horacio Cortes ended his first year at 50 percent. Before him, Fernando Lugo—who represented an interruption in the Colorado Party’s long reign—enjoyed 54 percent approval at the one-year point.

AS/COA Online takes a look at Abdo Benítez’s challenges—and other issues—after the end of the first year of his five-year term.

The anniversary came at a time of upheaval, largely due to a secret energy deal signed with the Brazilian government in May. The pact, which involved the Itaipú Dam that lies on the Paraná River between the two countries, was an update to an original 2009 agreement. Critics say it favored Brazil by limiting Paraguay’s access to energy produced by Itaipú and raising the comparative price of energy—a move that would have more than halved Paraguay’s revenues from the dam. Opposition legislators—and even some in the Colorado Party—saw the proposed deal as a violation of Paraguayan sovereignty.

Brazilian negotiators further asked that Paraguay grant a private energy contract to a company with alleged ties to the Bolsonaro family. The deal came to light when the president of the National Energy Administration (ANDE) Pedro Ferreira resigned in late July, announcing the secret agreement after refusing to sign it, saying that granting the exclusive contract to the Brazilian company would be “like shoving a Lava Jato on Paraguay. It would introduce corruption.”

Amid the outcry, both countries suspended the deal.The opposition, which was in the process of gathering signatures for an impeachment process against Abdo Benítez, stepped back on the threat for now.

The Brazilian government of right-wing Jair Bolsonaro publicly backed the Paraguayan president, with Foreign Minister Ernesto Araújo saying that the efforts to impeach Abdo Benítez risked the “rupture of democratic order.” Moreover, Paraguayans and Brazilians are negotiating a new agreement.

According to the World Bank, Paraguay averaged 4.5 percent growth annually between 2004 and 2017 and saw poverty reduced by 49 percent over the same period. But last year growth slowed to 3.6 percent and the forecast for this year is 3.5 percent, still above the projection for Latin America as a whole of 2 percent. Abdo Benítez also announced a fiscal reform at the start of his term to raise government revenue by 1 percent of GDP without changing the corporate tax rate, which currently is about 10 percent, and instead shifting from indirect taxes to direct taxes on incomes and revenues. Amid resistance from the private sector and the energy deal controversy, the reform has been delayed.

In addition, drought took a toll in the summer months of December 2018 and January 2019. By May, soy production, which makes up 32 percent of Paraguay’s exports, had fallen 24 percent year-to-year at an estimated loss of over $1.3 billion.

Ahead of Abdo Benítez’s election, Paraguayans counted security, health, and education as top concerns, per a CIRD survey conducted in January 2018. In a bid to battle drug trafficking and organized crime, his administration spent $1 million to install over 220 security cameras to aid the 911 emergency response system in various cities. The Antinarcotics Department of the National Police also raided and destroyed over 430 hectares of planted marijuana, continuing an antidrug campaign inherited from Cartes.

On health care, between August 2018 and March 2019 the government’s Institute of Social Welfare increased spending by 26 percent, investing in new facilities like hospitals and intensive therapy units, the refurbishing of 38 family health facilities, and the construction of over 40 primary care facilities across the country.

On education, the Abdo Benítez government invested over $34 million in its first year, building 1,880 classrooms, laboratories, libraries, and cafeterias and more in 320 educational institutions nationwide. Around $4.7 million of that money went toward installing high-speed internet in schools. However, as the costs of plans are 65 percent higher than the government’s current spending budget.

Paraguay was one of six signatories in an unprecedented September 2018 “state referral” filed before the International Criminal Court that asked for an investigation of crimes against humanity in Venezuela. Paraguay, along with other members of the Lima Group, announced in January that it was switching its diplomatic recognition from Nicolás Maduro’s government to the interim administration of Juan Guaidó and closing its embassy in Caracas.