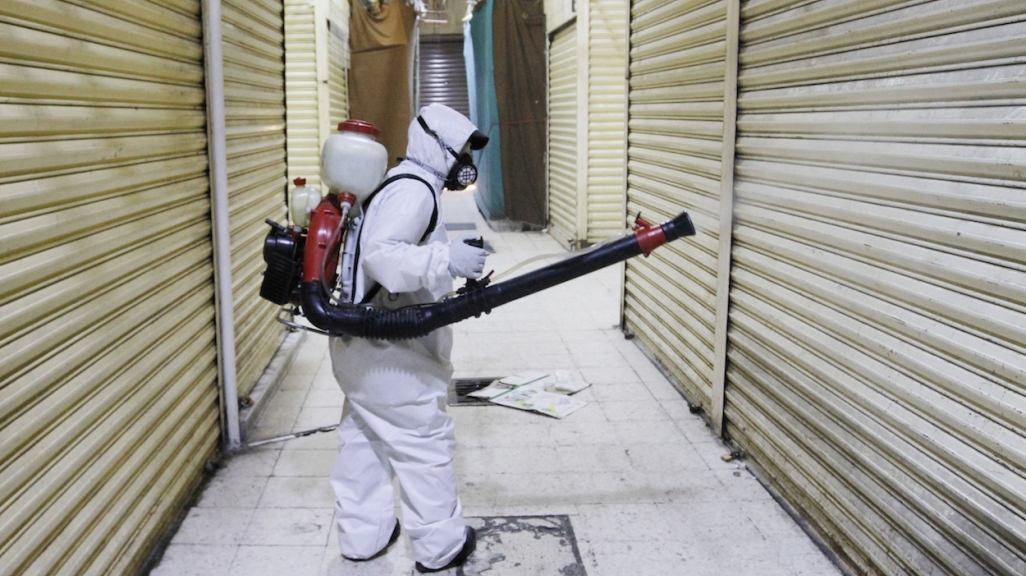 A worker disinfects a market in Mexico City. (AP)

Called the “new normal,” the country began its three-part reopening plan on May 18, even as confirmed COVID-19 cases topped 50,000.

It’s called the “new normal.” On May 18, about 50 days after declaring a national health emergency, Mexico began its three-phase reopening process. The country crossed another threshold on the same day as confirmed cases topped 50,000. Two days later, the confirmed death count exceeded 400 in one day for the first time.

With one of the lowest testing rates in Latin America, civil society groups and media outlets are releasing reports and raising concerns that official tallies undercount COVID-19 deaths, with the true number being at least three times higher in the capital, Mexico’s pandemic epicenter. Deputy Health Minister—and the government’s top coronavirus spokesman—Hugo López-Gatell has acknowledged that case and death tallies are higher than those confirmed.

The government of President Andrés Manuel López Obrador says the country hit peak contagion on May 8—though day-on-day case count increases continue to rise—and unveiled its reactivation plan a few days later. There’s little mystery why: 10.7 million Mexicans are at risk of falling into extreme poverty and analysts forecast a GDP contraction of at least 7 percent for 2020. With more than 555,000 jobs lost in April, the highest figure on record, Mexicans are worried about their economic fate in pandemic times. On May 10, López-Gatell suggested that even with new outbreaks, there would not be a return to a national-level quarantine, given the devastating economic effects.

Each country is fighting the same virus, but the battles waged are playing out differently across the board.

What was closed before?

Mexico, which confirmed its first case on February 28, began its national period of social distancing on March 23, when it shut down schools and suspended large gatherings. On May 30, during López-Gatell’s nightly COVID-19 press conference, Foreign Minister Marcelo Ebrard announced a state of health emergency, suspending non-essential activities, limiting the size of gatherings to no more than 50 people in the case of essential sectors, and urging people—particularly those over 60 and at-risk health populations—to stay home.

While this marked the beginning of the country’s quarantine, Ebrard clarified that a state of exception was not being called, meaning there would be no enforced curfew. He also suggested that companies could face sanctions if they failed to follow restrictions or pay workers in the case of suspended operations. The government’s March 31 list of essential activities included a wide range of services, from the financial sector to food production to tax collection to daycare programs, and the list was subsequently expanded and clarified in April.

Even with clarifications, doubts persisted, and U.S. officials raised concerns about disrupted North American supply chains due to Mexico’s essential services list being out of sync with those of Canada and the United States. On April 29, a bipartisan group of 11 U.S. senators addressed a letter to U.S. Secretary of State Mike Pompeo, urging him to work with the Mexican government to clarify its list of essential services. On April 20, the Pentagon urged Mexico to reopen some of its defense-related factories, then praised the country on April 30 for taking steps to reactivate this sector. The U.S.-Mexico border closed to nonessential travel on March 21 but remains open for commerce.

Coronavirus contagion started to build in Mexico weeks after it did in the United States, and the Mexican federal government at times signaled it would follow its own response calendar. At others, it signaled it would consider measures such as reopening automotive factories in parallel with the United States and Canada. In some cases, as foreign-owned factories faced deadly outbreaks and worker protests, state and local officials implemented their own measures and shut down operations amid confusion about what could be considered essential.

Calling its reactivation plan the “new normal,” Mexico on May 13 unveiled a three-stage opening based on a color-coded system. In a May 16 press conference, López-Gatell mapped out 324 towns and cities, dubbed “municipalities of hope,” with no confirmed coronavirus cases that had been given the green light to reopen businesses and schools starting May 18.

The second stage, which runs from May 18 to 31, involves setting protocols to prepare reopening the entire country. Come June 1, when the third stage begins, the country’s national period of social distancing concludes. However, that doesn’t translate to a nationwide reopening. They will assess various parts of the country based on four colors—red, orange, yellow, and green—to determine the degree each should restart economic, social, and school activities. Areas deemed red face maximum precautions while orange areas can run reduced essential and non-essential economic activities and allow reduced activity in public spaces. Regions categorized as yellow can reopen all economic activities, as well as allow reduced cultural activities and lighten controlled care of vulnerable populations. Green regions can take additional steps, from opening schools to dropping restrictions in public spaces. Regions will be assessed on a regular basis to determine where they stand in the color-coded system.

Much like the matter of essential services raised questions prior to Mexico’s reopening, the question of when certain sectors could restart has been a question since the May 13 unveiling of the reactivation plan. Although the initial announcement suggested the reopening of construction, auto manufacturing, and mining sectors, this became less clear on May 14 when a government gazette suggested these three areas could prepare to reopen during this time but would not restart until June 1. Amid concerns in particular from the U.S. auto sector, the government made a change again on May 15 when it said companies can restart operations before June 1 in cases where they ask to be evaluated for compliance with health protocols and receive government approval within 72 hours. This move places Mexican factories in line with U.S. auto manufacturers, which began to reopen plants on May 18.

On top of that, while the federal government kicks its reopening into gear, local authorities are making their own assessments, as in the case of the “municipalities of hope.” The towns are located in 15 of Mexico’s 32 states and, when May 18 rolled around, a number of governors opted not to reopen the municipalities, citing concerns such as a lack of testing to ensure the areas were free of the virus. In some cases, such as Jalisco and the border state of Chihuahua, opposition governors have taken more stringent measures than those of the federal government since early in the pandemic’s arrival. Then there are the hot spots, such as Mexico City, where Mayor Claudia Sheinbaum estimates the capital will be in the red zone until June 15 and said she will base the decision on when to shift to orange on whether occupancy in hospitals treating COVID-19 drops below 65 percent. As of May 18, the occupancy rate stood at 74 percent in Mexico City, where close 30 percent of nationwide cases have been confirmed.