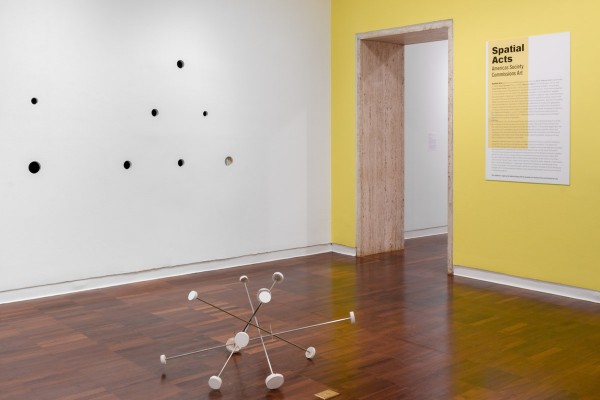 In 2015, Park Avenue’s art collection will feature an installation by an emerging Latin American artist. The Americas Society art commission is in the final stages of an initiative to reinvigorate the lobby of the institution’s landmark building on 680 Park Avenue in New York. The new space, unveiled two years ago as the David Rockefeller Atrium, pays tribute to the founder and honorary chairman of Americas Society and Council of the Americas.

The exhibition Spatial Acts: Americas Society Commissions Art—on view at the Society’s gallery from October 7 through December 13, 2014—is the result of the selection process. Out of 17 nominated artists, four finalists were selected to show their work at the Americas Society. Spatial Acts features works by artists Esvin Alarcón Lam (Guatemala), Elena Damiani (Peru), Marcius Galan (Brazil), and Jorge Pedro Núñez (Venezuela). These finalists were selected after a two-step assessment process over the past six months. World-renowned artists, curators, and collectors, as well as Americas Society board members and staff, evaluated the submissions based on criteria such as site-suitability, aesthetics, and alignment with the organization’s mission and trajectory.

The artists spoke with AS/COA Online’s Luisa Leme about their work and proposals for the David Rockefeller Atrium. The Americas Society plans to announce the winner of the commission by the end of the year. Meet the finalist artists on view in Spatial Acts:

He proposes to create a piece around the elevator encasement with pieces of converted school buses from the United States, which are used for public transportation in Guatemala. For the artist, both the elevator and the buses in Guatemala are modes of transportation. “It’s about communication. It's always related to time and displacement, which are very important ideas in Latin America,” Alarcón Lam explains.

Elena Damiani is from Peru and lives and works between Copenhagen and Lima. She studied Architecture at the Universidad Peruana de Ciencias Aplicadas and subsequently transferred to the Escuela Superior de Bellas Artes Corriente Alterna where she graduated in Fine Arts in 2005. She received her MFA from Goldsmiths College, University of London, 2010.

Damiani proposes an “encasement around the elevator encasement” in the Atrium. Her work would feature a photo of the Chimborazo, in Ecuador. The dormant volcano is the highest mountain north of Peru in South America. For the artist, the installation would refer to the institution’s mission, representing a centerpoint for the region. “I’m relating the elevator as a meeting point in the space of Atrium to a more poetic meeting point in the Western Hemisphere, the Chimborazo,” she explains.

Marcius Galan is Brazilian and lives in São Paulo. He graduated in Art Education at Fundação Armando Alvares Penteado in 1997. In 2003, he received a scholarship to the Cité des Arts in Paris, and in 2004 participated at the Art Institute of Chicago residency program through the exchange program from Instituto Iberê Camargo.

Galan’s project for the Atrium creates a geometrical composition around the elevator encasement with pieces of wood, “constructing two contrary movements: one drawing and the other one erasing the surface,” he explains.

Jorge Pedro Nuñez is from Venezuela and lives in Paris. He graduated from l’École Nationale Supérieure d’arts de Paris, Cergy in 2006. In 2010 he participated in the residence Le Pavillon at the Palais de Tokio, Paris.

Nuñez proposes a wall of ancient texts that can be interchanged manually through time. “The idea is to play with historical texts from artists who worked with text as form,” the artist explains.