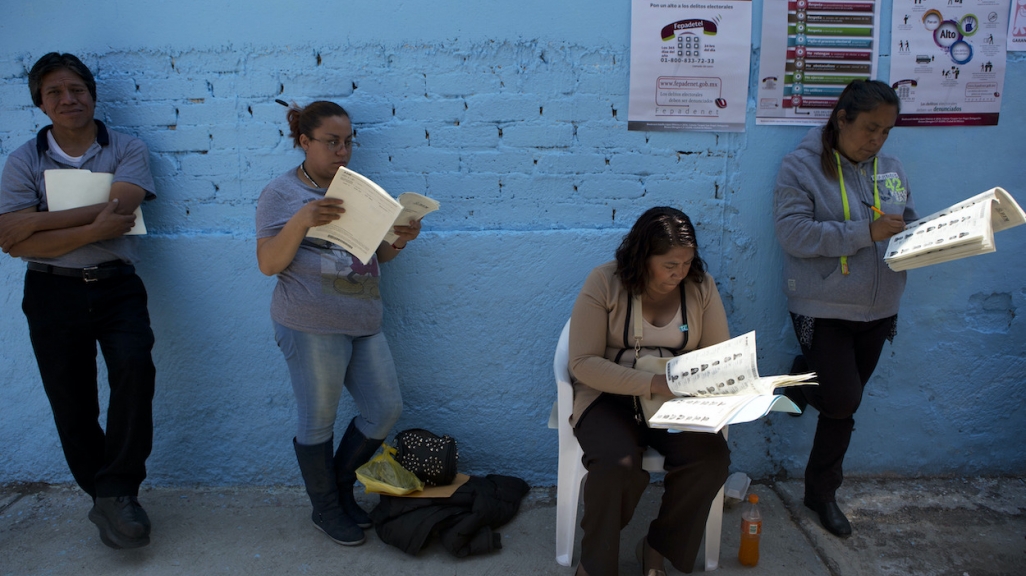 Observers for political parties at a Mexican election. (AP)

LatAm in Focus: A Pre-Midterm Pulse Check on the Mexican Electorate

Can President Andrés Manuel López Obrador’s governing coalition keep its supermajority in the Chamber of Deputies? El Financiero’s Alejandro Moreno tells us what the polls indicate.

With 21,000 seats up for grabs across all 32 states, Mexico’s June 6 midterms will be of huge importance. Not only will voters select candidates for a record number of posts, but they’ll also get the chance to signal their assessment of the political movement of President Andrés Manuel López Obrador—better known as AMLO—even if he’s not on the ballot. Will his newcomer party, Morena, build on its sweep of the 2018 elections? And what are the chances Morena’s coalition will win a supermajority in the Chamber of Deputies, where all 500 seats are up for grabs?

“In every single midterm election since 1997, the governing party has lost support and lost presence in the lower chamber of Congress,” says Dr. Alejandro Moreno, head of public opinion polling at El Financiero. He explains polls indicate Morena is unlikely to buck that trend. Still, he tells AS/COA Online’s Carin Zissis that support for AMLO’s party is similar to where it was in the last election, even if there have been shifts in where that support is coming from. “The younger voters, who were the first and most immediate supporters of López Obrador, are the first ones to abandon him,” says Moreno, who adds that a rise in support among older voters is compensating for that loss.

He also says that Morena’s supporters are made up increasingly of rural voters with lower education levels who previously backed the once-mighty Institutional Revolutionary Party (PRI). “2018 was more like a rare manifestation of the vote rather than a realignment for the future,” notes Moreno, who points out that both rural and urban middle class voters—two groups that in the past diverged—came together for AMLO in that vote. Now he says: “Things seem to be going back to how they were before.”

"Polls offer this opportunity to have an X-ray of the electorate."

But some aspects of this election are new, and one example is the heightened divisions. “We haven't seen this level of political polarization in the country that I can remember [since I started doing] polls in Mexico,” says Moreno, who is also a political scientist at the Mexico Autonomous Institute of Technology, or ITAM. Why? Voters are less attached to major political parties, which is coupled, he says, with “the president following—for good or bad, I'm not going to judge, just to describe—a polarizing strategy.” Meanwhile, parties that in the past were what Moreno describes as “historical adversaries” have formed alliances in this election to take on the governing party. “Now it's everyone against Morena and its allies.”