A truck crosses the U.S.-Mexican border at Laredo. (AP Photo) 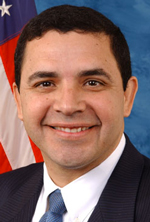 “Six million jobs have been created just on the U.S. side [of the border] because of the trade that we have with Mexico.”

U.S. Representative Henry Cuellar (D-TX) speaks with AS/COA Director of Policy Jason Marczak about the local and national economic necessity for further facilitating cross-border trade. Representative Cuellar represents Laredo, Texas—the port of entry for approximately 40 percent of U.S.-Mexico trade, and the site of the August 16 COA Border Roundtable on U.S.-Mexico Competitiveness. With Mexico being one of the top-three trading partners of the United States, Congressman Cuellar highlights how “the border has an impact in Oklahoma, in Michigan, and in other places away from the border.”

AS/COA: Why should facilitation of cross-border trade be a priority for the U.S. government?

AS/COA: What are some short-term as well as longer-term fixes that can be made by Congress to further maximize the economic opportunities along the U.S.-Mexico border?

Cuellar: Well, there’s two things that I think we’ve got to look at. Congress has done a good job of putting men and women in green—Border Patrol. But we haven’t done a good job at putting men and women in blue, which are the Customs folks at the bridges. And we’ve got to understand that what we do at the bridges here at the border has an impact in Oklahoma, in Michigan, and in other places away from the border because of the trade that is generated here.

So the two things we can do better are to add more personnel—men and women in blue—and improve infrastructure. The new bridges have the footprints to grow. But the ones built years ago are very constrained and very tight places. We have got to figure out how we can use procedures and work with the Mexicans to move traffic in a more orderly process.

AS/COA: And speaking of working with the Mexicans, with Enrique Peña Nieto poised to take office in December and the U.S. presidential inauguration in January, the timing seems right for more bilateral actions to improve trade along the border. What specifically could the two governments accomplish through greater coordination?

Cuellar: I think that two things could be done—and I’ve talked to Peña Nieto personally about this. He wants to see the partnership between the U.S. and Mexico grow. I think that for both the United States and Mexico, as we go through the Trans-Pacific Partnership, that this will have an impact on what we did with NAFTA. NAFTA was a good agreement between the U.S., Mexico, and Canada. But I think now that the Trans-Pacific Partnership will allow us to improve some of the areas that we did in NAFTA without opening up NAFTA. This will allow us to improve trade, move things better, and improve the economic relationship.

AS/COA: When it comes to the border, a big challenge is that most Americans are fixated on security issues rather than the opportunities that business, consumers, and workers would enjoy with policies that facilitate greater commerce opportunities. How can the political discussion be shifted so the border is viewed as less of a threat and more of an opportunity?

Cuellar: You’re right. The border’s been called a war zone. The border has been called the Wild, Wild West. You’re here with me right now and you can see that this is a peaceful area. Like any place, there are crimes. But if you look at the FBI statistics, you would see that the crime rate along the border—murder and other crimes—is lower than the national crime rate.

If you look at individual cities per a hundred thousand [inhabitants], you will see that Laredo, El Paso, and other areas are lower than other places. For example, I work in Washington DC, and I live in Laredo. The crime rate here in Laredo is much lower than the crime rate in Washington. So there is this stereotype about the border, but what we got to understand is that the border is a vibrant area and is the gateway into the United States for many of our jobs, trade and tourism.

Cuellar: Exactly. Our trade here is a great generator of jobs. And usually when a recession or a downturn hits the American economy, the border area keeps going because of the trade that we have with Mexico. Now, if something happens in Mexico, then we feel it over here. But our economy is intertwined, not only with the U.S. economy but with the Mexican economy. It’s a very different type of dynamics that we see here.

“This momentous agreement will continue to create stability, growth, and jobs in the United States, Mexico, and Canada,” said AS/COA President and... Read More

One of Mexico's most trendsetting designers is also one of its foremost advocates for indigenous artisans.