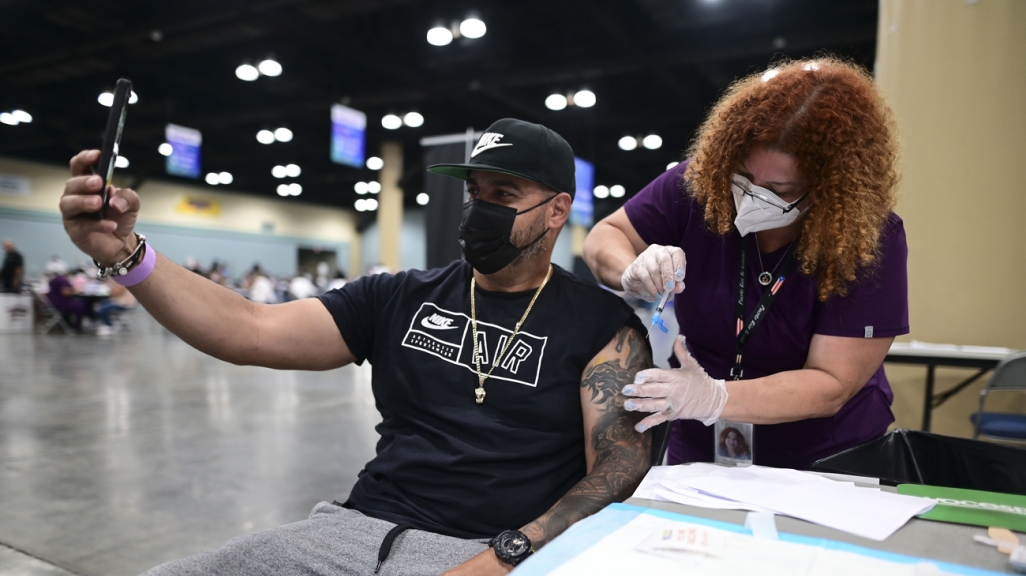 Getting vaccinated in Puerto Rico. (AP)

What country is a booster champ? Who kept a vaccine promise? Where was there a rebel with a cause? We look at how countries rose to the vaccination occasion.

A year ago on Christmas Eve, Mexico became the first country in Latin America to roll out Covid immunizations when a nurse received a Pfizer shot. Since that inaugural jab, 838 million vaccine doses of at least 10 different vaccines have been given out in Latin America. It’s a welcome figure for the region particularly hit hard and struggling to recover from the pandemic.

Still, 2021 involved its fair share of vaccination hurdles. From lags in second doses, variants, supply problems, subpar global programs, and geopolitical tensions, each country dealt with its own setbacks. And several countries in the region still remain below the Pan-American Health Organization (PAHO) benchmark of 40 percent vaccination.

Despite that, successes abound. Chile and Uruguay, for example, consistently rank among the top five countries in the world for percentage of citizens vaccinated. Their rates have contributed to South America having vaccinated a greater percentage of its population than any other region globally, and countries in North America, Central America, and the Caribbean have had their own vaccine triumphs.

As 2021 comes to a close, AS/COA Online looks at some of Latin America’s superlative accomplishments when it comes to executing the greatest medical logistics operation in modern history.

In June, PAHO urged countries to donate to other nations in need before they have a surplus. In the case of the United States, Washington has donated 275 million doses worldwide.

But countries within Latin America have also shown vaccine generosity, particularly Mexico, which donated a total of 1.16 million doses to Belize, Bolivia, Guatemala, Honduras, Jamaica, and Paraguay. Mexico is also supplying paid doses to the region through its partnership with Argentina to produce AstraZeneca shots.

The Dominican Republic deserves an honorable mention for its regional generosity; it delivered over 600,000 doses to Central America and the Caribbean. Argentina and Chile also shared several hundred thousand regional donations.

The president took office on May 24 with the challenge of fulfilling a campaign pledge: to vaccinate 9 million Ecuadorans in his first 100 days. It was a hefty goal in the country of 17 million, which up to that point had given just over 700,000 doses. By the time his presidential honeymoon period was over, Lasso had succeeded.

How? His government invested in a wide array of vaccine suppliers and secured a diverse set of contracts. His administration also established 1,700 health brigades, opened 520 vaccination centers, and leveraged private-public partnerships to get vaccines to urban and rural residents alike.

By August, about 72 percent of Chileans had received at least one shot, one of the highest percentages in the world. But then global health advisors started to advocate for citizens to receive a booster shot, especially if they had been inoculated with vaccines such as CanSino, SinoVac, or Johnson and Johnson. In Chile, where SinoVac was the most common vaccine distributed, officials wasted no time in kicking off a booster campaign. On August 11, Chile began giving out third shots of AstraZeneca and Pfizer. This technique of mixing vaccine doses allowed them to raise immunity and diversify their supply. By December, Chile became a global leader when it came to booster doses, with about 49 percent of Chileans boosted.

Uruguay, which began its booster campaign before Chile, has given out the third most booster doses in the world, covering about 41 percent of its population.

With an estimated 1.7 million Venezuelans living in Colombia as of March, no country has done more to support refugees fleeing the Maduro regime. On top of that, in October the Colombian government agreed to provide Venezuelans with shots at the border. Total figures are unknown, but in just the state of North Santander alone, over 34,000 Venezuelans had received jabs by November 13.

Meanwhile, Honduras provided neighboring Nicaragua doses. The government has set aside 100,000 vaccines to be used at sites along their shared border.

Few countries in the world struggled more with the pandemic than Peru. During the early months, the country struggled to acquire the medical supplies necessary to combat the disease. High levels of informality, population density, and a struggling public health-care system resulted in the Andean country having the world’s highest per capita Covid death rate.

But now Peru sits in Latin America’s top 10 in terms of percentage of population fully vaccinated, with 60 percent of citizens immunized. How did the country surpass many of its South American neighbors? It secured an extensive supply of vaccines and overcame both challenging geography and vaccine skepticism. Starting December 15, Peruvians will need to have received a jab to enter closed spaces.

Argentina also deserves credit for a comeback. After facing delivery delays of Sputnik V, the country turned to domestic production to get citizens second doses. As of December 10, it has Latin America’s fourth-highest fully vaccinated rate, at 68 percent.

Rebels with a Cause: Brazil’s States and Cities

It’s no secret that Brazilian President Jair Bolsonaro charted his own course when it came to vaccinations. Perhaps the only world leader who openly claims to be unvaccinated, Bolsonaro has questioned the efficacy of vaccines and advocated for untested treatments.

So, when vaccines were ready, Brazil’s mayors and governors sprang into action, acting independently—and sometimes in defiance—of the federal government to safeguard their populations. Take São Paulo: the state cut a deal with the developers of China’s SinoVac vaccine to secure supply. After a successful rollout, small cities in the state were some of the first in the hemisphere to reach full vaccination and the city of São Paulo itself claims to have reached 100 percent coverage of eligible populations as of December 13. Other cities, like Alcântara in Maranhão state, in Brazil also made global headlines. The small city gave every citizen a first dose by June 11.

Through the work of local governments, 65.1 percent of Brazil’s population has been vaccinated as of December 10 with many states boasting vaccination rates of around 80 percent.

Which part of the United States has the highest vaccination rate? Many are surprised to learn it’s Puerto Rico. As of December 12, the territory had fully vaccinated 75.3 percent of its population.

One explanation for Puerto Rico’s success comes in contrast to much of the rest of the United States—vaccinations were not politicized. A strong endorsement of vaccines from figures across the island and post-disaster improvements to Puerto Rico’s public health system are credited with helping to ensure an efficient rollout.

Covid-19 exposed the importance of global collaboration and partnerships to overcome disasters. One country that recognized the need for strong multilateral action was Costa Rica. Alongside the World Health Organization, Costa Rica founded the Covid-19 Technology Access Pool, or C-TAP—a platform that allows for the sharing of intellectual property and data from Covid-19 treatments, vaccines, and diagnostics with manufacturers. A Spanish-developed Covid-19 antibody test became the first global, non-exclusive licensed Coronavirus technology in C-TAP in November. 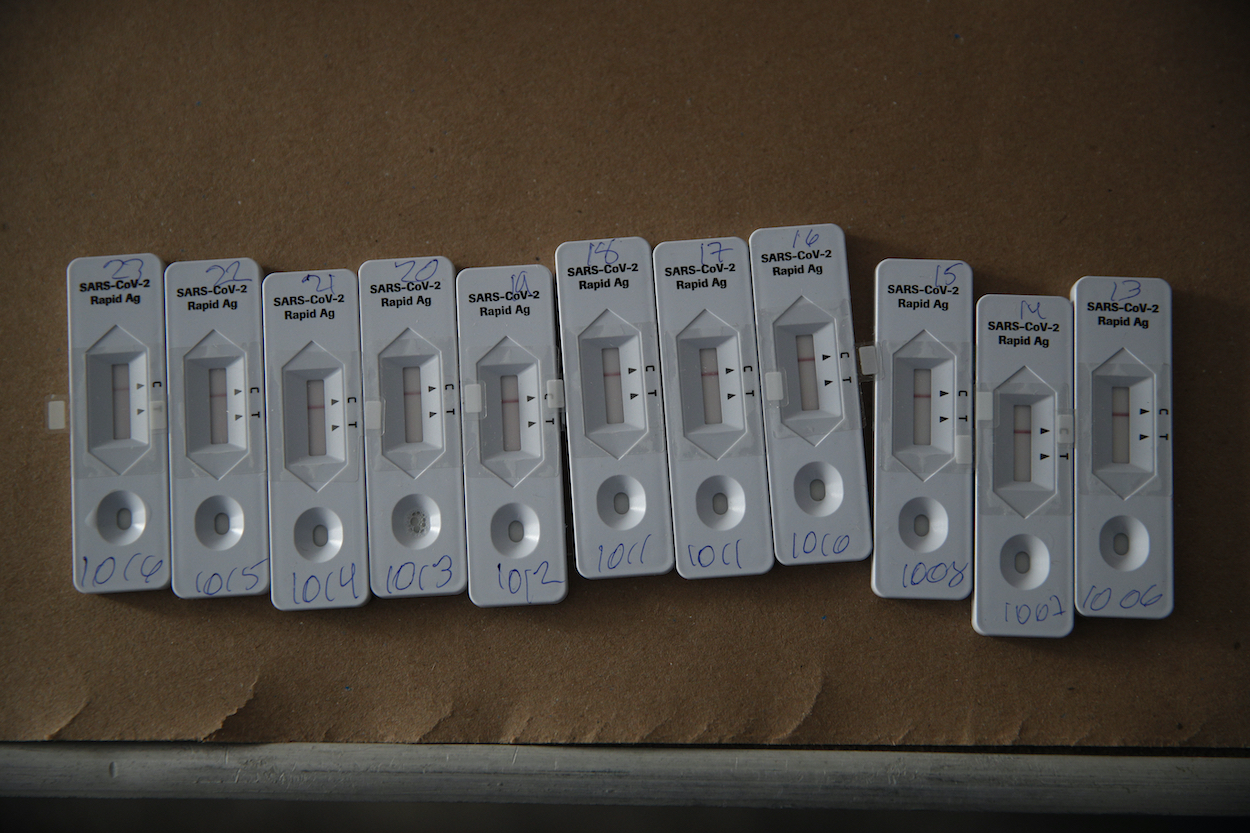