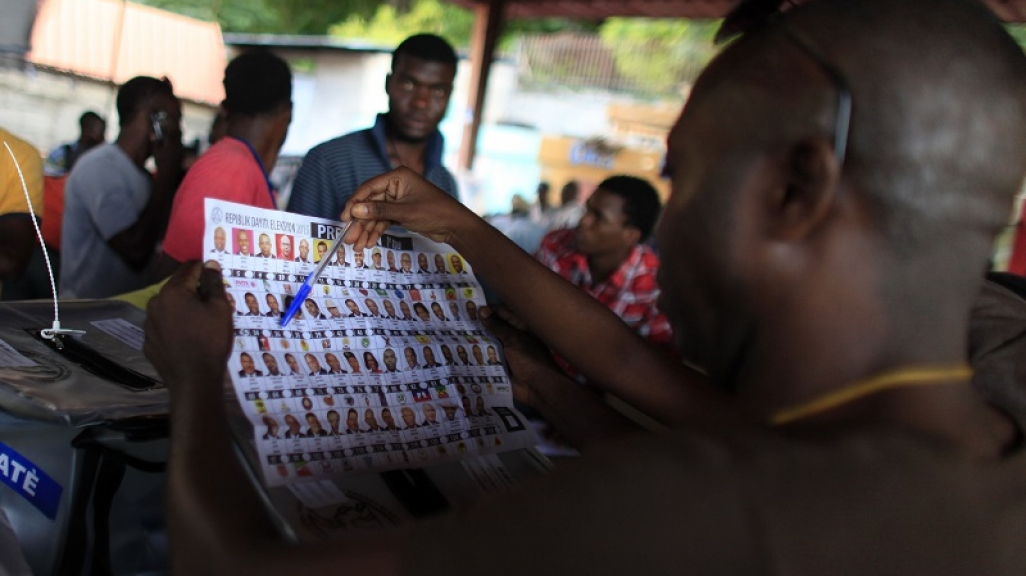 After 2015 election results were scrapped, what’ll be different about the October 9 vote?

It’s been nearly a year since Haiti’s botched presidential elections of October 25, 2015. Haitians and international observers alike are counting on the new Election Day, set for October 9, to replace the current provisional president, Jocelerme Privert. The candidates leading the race a year ago are the same ones topping the polls today, but a refurbished electoral body promises not to repeat the mistakes of the past and to stick to the new election timeline. If one of 27 presidential candidates in the run doesn’t get over 50 percent of the vote on October 9, a runoff will take place January 8. Voters will also elect a third of Senate seats, along with thousands of municipal posts.

In 2015, Haitians took to the polls to elect a president and a number of legislative seats. Since none of the 54 candidates received a majority of votes, a runoff needed to take place. But widespread irregularities with the ballots, calls for an investigation, and major protests forced the government to postpone the runoff three times. In June 2016, Haiti’s Provisional Electoral Council (CEP) decided to scrap the October 2015 results after an independent verification commission found 40 percent of the votes untraceable to real, live voters.

As such, a few things will be different this time around, such as stricter balloting and accreditation for poll monitors—considered to be among the main perpetrators of the false votes. Unlike in October 2015, when nearly 1 million poll monitors were able to cast multiple ballots at any voting locale and were selling their accreditation cards, this time each will be assigned beforehand to specific polling stations to cast their own ballots. An Independent Electoral Verification Commission, created by the interim president, will oversee the new balloting procedures. Plus, Haiti’s new election chief, Léopold Berlanger, told The Miami Herald that the CEP would punish violators by publishing their names to shame them publicly.

Another notable change is the U.S. decision not to fund the new electoral rounds. Washington contributed some $33 million previously. Haiti is now counting on a budget of $55 million gathered from public agencies, port revenues, and the Central Bank.

What do the polls say?

Fraught with irregularities, the results of Haiti’s October 2015 elections gave the government-backed candidate Jovenel Moïse 33 percent of the vote and Jude Célestin 25 percent. Per an August poll by the local firm Research Office in Computer Science and Economic and Social Development (known as BRIDES), 41 percent of Haitians intend to vote for Moïse while 25 prefer Célestin. However, when Sigma Stat Consulting Group & Associates asked Haitians in an early September poll which candidate had the best chance of winning, Maryse Narcisse of the Fanmi Lavalas party came in first; she came in fourth in BRIDES’ poll.

But Haitians and the candidates alike have long been skeptical of polls, questioning where BRIDES gets its funding. Either way, the consultancy’s 2015 survey giving Célestin the lead proved wrong. Meanwhile, local news website HaitiLibre also questioned the validity of Sigma Stat’s results giving Narcisse the lead, saying that a third pollster will likely enter the scene and give a different candidate the top spot.

With these reservations in mind, here are the poll results charted:

Handpicked by former President Michel Martelly of the Haitian Tèt Kale Party, Jovenel Moïse is an entrepreneur who runs Agritrans, Haiti’s first agricultural free zone dedicated to exporting bananas to Europe. In December, a senator called for an investigation into whether Agritrans was helping traffic cocaine, and a 2016 report by the Central Unit of Financial Information (UCREF) said Moïse, also known as the “banana man,” is suspected of involvement in money laundering. Moïse responded by saying accusations are politically motivated and that UCREF never attempted to contact him.

Moïse’s platform is framed around his business experience and participation in the country’s chamber of commerce, which he says makes him the right man to stimulate the Haitian economy and create jobs.

While Moïse is a political newcomer, Jude Célestin of the Alternative League for Progress and Haitian Emancipation party—known as LAPEH—has run for president before. In 2010, he was set for a runoff against former First Lady Mirlande Manigat. Election monitors claimed fraudulent votes favored Célestin, and at the behest of the UN and the United States, he dropped out, making room for Martelly to win the race. With this experience, Célestin refused to recognize the 2015 results, refusing to participate in the runoff and what he considered a rigged election. “I want to go to an election, not a selection,” he told The New York Times.

As of September 15, four major political parties formally back the candidate, including former President René Préval’s Unity party, under which Célestin ran in 2010. Célestin worked in Préval’s administration as director general of the government’s road construction agency and later became his infrastructure advisor.

His campaign promises to focus on restructuring government institutions, fighting corruption, and promoting an open economy to generate growth and jobs.

Moïse Jean Charles is former senator of the Pitit Desalin party and a three-term mayor of Milot in northern Haiti. A critic of the Martelly administration, Jean Charles has promised to prosecute former governments for mismanagement of funds. His campaign has focused on Haiti’s economic independence through domestic production and food autonomy, as well as building universities throughout the country.

If elected, Maryse Narcisse would become Haiti’s first female president. Narcisse is running under the Fanmi Lavalas party of Jean-Bertrand Aristide, Haiti’s first democratically elected president in 1990. Seen as representing Haiti’s poor, the Lavalas party has a tumultuous history. Aristide was ousted in a coup in 1991, came back to power from 1994 to 1996, was again elected in 2000 and again ousted and exiled in 2004.

Narcisse worked in the health ministry during Aristide’s 2000–2004 administration, and also went into exile but returned to Haiti in 2006 and became the Fanmi Lavalas party spokesperson. A doctor, Narcisse helped open clinics across the country in the 1990s before turning to politics. Her platform calls for strengthening democracy, rule of law, and social inclusion in Haiti. Narcisse also has a background in working for international organizations, including at the Permanent Mission of Haiti to the UN and the U.S. Agency for International Development.