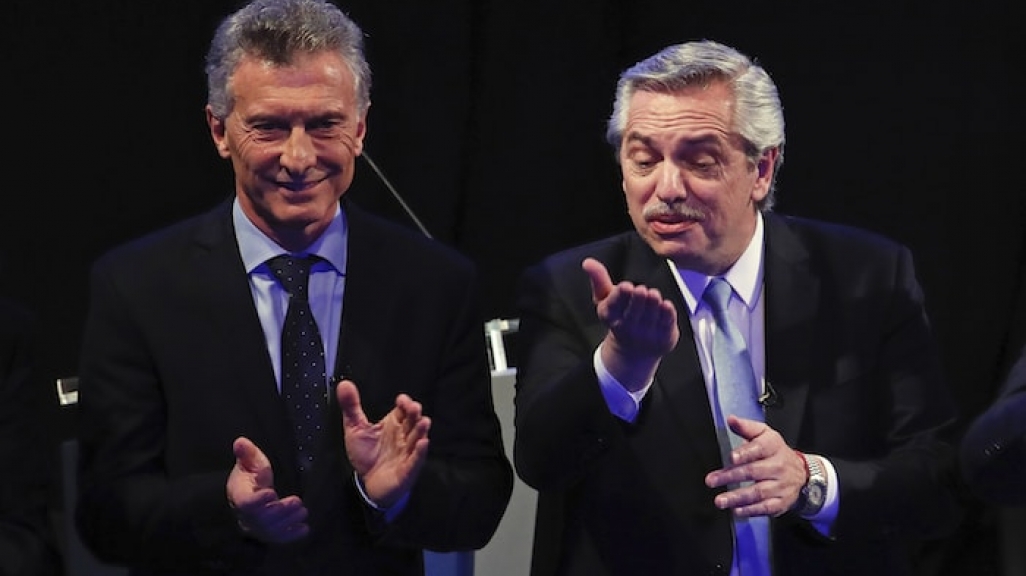 The First Round: Argentina's 2019 Presidential Election

The October 27 election is coming down to two presidential tickets, and Alberto Fernández is polling ahead of President Mauricio Macri.

Argentines head to the polls on October 27 to cast votes in the first-round presidential vote. The August 11 primaries, known as the PASO, foreshadowed what might come. Those results narrowed the field from nine to six candidates when three tickets failed to break the 1.5 percent minimum threshold to compete. But the bigger news was that this race is coming down to two tickets—and the incumbent, President Mauricio Macri, is the underdog against rival Alberto Fernández of the Peronist party.

AS/COA Online previews the scene before the election.

In the first round, a candidate needs to get either 45 percent of the vote or 40 percent with 10 points over the runner-up to win outright. Otherwise, the top two candidates meet in a runoff on November 24. Presidents may run for consecutive reelection once, then must sit out one four-year term before qualifying to run again.

Aside from casting ballots for presidents, voters will also elect 24 senators and 130 lower house representatives and four governors, including the key seat in the Buenos Aires province. There are roughly 33 million registered voters and voting is compulsory.

The next president will be inaugurated on December 10, 2019.

The results of this election could mean either a second term for center-right Macri or a leftward shift with candidate Fernández. In the final weeks of the campaign, the Peronist ticket is polling well ahead.

Fernández-Fernández de Kirchner: The frontrunner candidate, along with his running mate ex-President Cristina Fernández de Kirchner, is sailing into election day with a double-digit lead in polls. He does so at the helm of the Everyone’s Front coalition, made up of several Peronist parties. Fernández served as the cabinet chief of the late ex-President Néstor Kirchner—who was also Cristina’s husband.

A career strategist for presidents, Fernández has suggested he will take a more moderate path than the interventionist policies of Fernández de Kirchner’s government. He has attacked Macri throughout his electoral campaign for Argentina’s high inflation, price hikes, poverty levels, and plans to renegotiate the IMF loan payments Argentina owes.

His running mate is an influential political figure in Peronist politics, and some posit that the decision to put Fernández at the top of their ticket was her design to appease moderates.

In the October 17 poll by Federico González y Asociados, the Fernández-Fernández ticket stands at 54 percent—22 points ahead of Macri. This suggests Fernández could win outright and avoid a runoff.

Macri-Pichetto: In his bid for a second term, the president decided to switch up his vice president and selected Senator Miguel Ángel Pichetto, a moderate Peronist, to be his running mate for the Together for Change coalition. That move to pick Pichetto over his current VP Gabriela Michetti, who is more conservative, was seen as a strategic play to broaden his base and appeal to more Argentines.

The Macri campaign’s high point was in late June, when the ailing Argentine peso jumped 2.3 percent in a day and the stock exchange closed over 6 percent over its main index level. Polls before the primaries had Macri just 7 points behind Fernández, a gap that seemed within the wide margin of error of some Argentine polls. But the optimism quickly dissipated when the PASO results came in: Macri and Pichetto finished 15 points behind Fernández and Fernández de Kirchner, who got over 40 percent of the vote, i.e. enough to win outright had that been the general election.

The gap between the two tickets widened to more than 20 points in some polls after the PASO, mainly over growing discontent over an ever-worsening Argentine economy. In September, monthly inflation hit 5.8 percent, the highest monthly total so far for the year.

Who else is on the ballot?

Four other presidential tickets remain in the race and likely only matter to the extent that either Macri or Fernández could pick up their votes in the case of a runoff.

Former Economy Minister Roberto Lavagna and running mate Juan Manuel Urtubey, governor of the northern province of Salta, are running for the Federal Consensus coalition, a Peronist-but-not-Kirchnerista alliance. They propose an overhaul of subsidies and taxes and to renew what they call “the central marriage of the economy: that of consumption and investment.” They have consistently polled in third place, gravitating at around 10 percent support since June.

On the right, economist José Luis Espert and journalist Luis Rosales are in the running for the Awakening Front, shifting from fourth and fifth place in polls, with 2 percent of the vote, per Federico González y Asociados. Espert, a well-known political commentator, is seeking to appeal to those disappointed with Macri’s government, in particular young voters.

On the left, candidate Nicolás del Caño and running mate Romina del Plá represent a coalition of leftists known as the Workers’ Left Front Unity. The ticket has polled mainly between 2 and 3 percent since July.

In the August primary, the country expected to see the Fernández-Fernández ticket win more votes than the ruling party as the Macri government faced yearly inflation running at 55 percent, rising poverty levels, and a menacing debt to the IMF. Still, the win margin was a surprise, with Fernandez earning 47 percent of the vote compared to Macri’s 32 percent.

On September 28 Macri’s coalition launched a new campaign for the final month of general election campaigning called “Yes we can,” telling supporters in a Buenos Aires march that he could still turn the tide on the election. But an October poll showed that only 19 percent of Argentines said the campaign made them more inclined to vote for him, while 33 percent said they were less inclined.

Argentines’ top concern is the economy, particularly inflation, prices, salaries, and unemployment. They are also fretting about corruption and public spending.