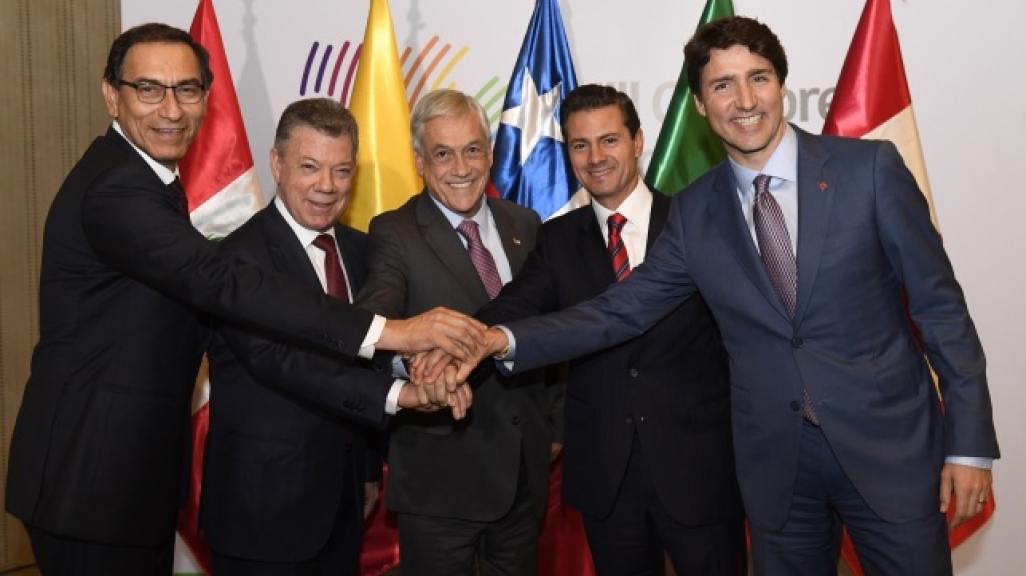 Explainer: What Is the Pacific Alliance?

With an eye toward Asia, this Latin American group is looking to increase trade and integration among members.

Updated July 23, 2018—One of the newest economic blocs to emerge from Latin America, the Pacific Alliance is designed to create a regional gateway to Asian markets. Composed of Chile, Colombia, Mexico, and Peru, the bloc's members are pursuing commercial, economic, and political integration. The group accounts for more than one-third of Latin America’s GDP and exports about 92 percent more than the Southern Common Market (Mercosur) bloc.

While only seven years old, the Pacific Alliance’s members have taken strides to liberalize trade, focusing on openness to foreign investment and the integration of a common market.

The Alliance was informally created on April 28, 2011, when the presidents of Chile, Colombia, Mexico, and Peru signed the Lima Declaration. This initiative was developed by then-Peruvian President Alan García to supplement the existing bilateral trade agreements between the four countries and create an economic bloc to negotiate and trade with other economies as a unified group. The Alliance’s goal was to increase competitiveness by integrating economies and allow for the free flow of capital, goods, people, and services among members, in addition to seeking expanded trade with Asia-Pacific countries.

Members of the Alliance

The Framework Agreement dictates that member countries must be democracies, practice separation of the powers of state, and protect, promote, and guarantee human rights and fundamental liberties. They must also have existing bilateral trade agreements with member countries. Article 3 of the Framework Agreement outlines requirements for countries seeking membership. The bloc aims to sign free trade agreements (FTAs) with Asia-Pacific countries based on existing bilateral trade accords.

Canada, Singapore, Australia, and New Zealand are in the process of becoming associate members of the alliance, while Costa Rica and Panama have been negotiating to become official members. However, after signing the Framework Agreement and beginning the path to full membership in 2013, Costa Rica’s government slowed its accession process due to concerns surrounding the impact the Alliance might have on the country’s agricultural sector. The nation’s new president, Carlos Alvarado Quesada, campaigned against Costa Rica joining and said he would negotiate a better deal on behalf of the country’s agricultural and industrial sectors.

Panama penned an FTA with Mexico on April 2, 2013, allowing the country to receive its Alliance “entry ticket” since it already has pacts with Chile, Colombia, and Peru. A tariff disagreement has been the main obstacle to Panama’s accession, but in a 2017 meeting with then-Chilean President Michelle Bachelet, Panamanian President Juan Carlos Varela reasserted his country’s desire to join the bloc.

In June 2018, Ecuador formally requested to become an official member, while the United Arab Emirates, Belarus, and Serbia asked to become observer states.

Goals and Progress of the Alliance