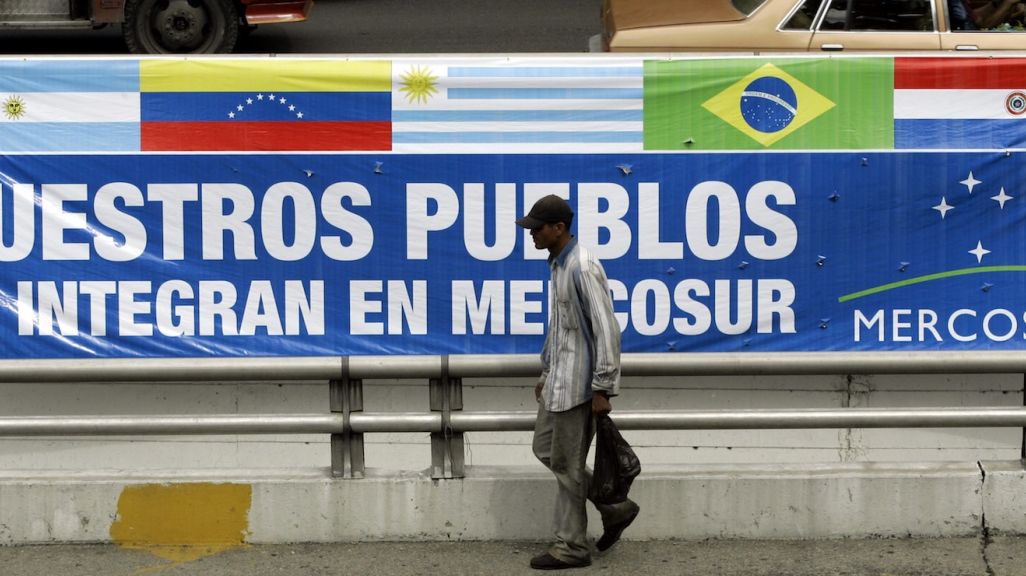 This article was originally published on August 2, 2012, and has since been updated.

The Southern Common Market—known as Mercosur in Spanish and Mercosul in Portuguese—is one of the world’s leading economic blocs, its fifth-largest economy. Mercosur is made up of four member countries: Argentina, Brazil, Paraguay, and Uruguay.

Mercosur functions as a customs union and free-trade area, and has ambitions to become a common market along the lines of the EU. However, more than 30 years after its founding, the group still struggles to achieve that goal. For years, the bloc has run into decreasing inter-bloc trade as well as political disagreements that stunted progress and trade liberalization. It’s resulted in the bloc’s growth rate slowing recent years—its internal trade decreased to 3 percent below the pre-2008 crisis levels.

Nevertheless, Mercosur remains an economic and political force in the region, uniting two of South America’s largest economies and providing a potential springboard for Latin American integration. With the Pacific Alliance, which comprises Chile, Colombia, Mexico, and Peru, the two blocs combined represent more than 80 percent of regional trade and over 90 percent of its GDP. Still, a July 2022 proposal by Uruguayan President Luis Lacalle Pou to sign a free-trade agreement with China—with or without its Mercosur partners—caused turbulence for the bloc’s unity.

Below, we take a look at Mercosur’s origins, members, goals, and China conundrum.

Born out of a series of economic cooperation agreements between Argentina and Brazil after their diplomatic rapprochement in the 1980s, Mercosur was founded in 1991 with the signing of the Treaty of Asunción. That accord brought Argentina, Brazil, Paraguay, and Uruguay into a customs union with the ultimate goal of a common market. Though it began with just four countries, members hoped the organization could lay the groundwork for the integration of all of South America. As envisioned at its founding, Mercosur would gradually achieve the steps to form a common market in the image of the EU. Plans called for the creation of a common external tariff (CET) and the free movement of goods, services, currency, and people between members. In reality, however, the bloc’s reach has often fallen short of some goals, and the group has not yet formed a common market as planned.

After an initial period of success—with inter-bloc trade growing fivefold from $4 billion in 1990 to $20 billion in 1997—the bloc floundered amid crises wrought by the devaluation of the Brazilian Real in 1999 and the Argentine economic meltdown of 2001. While trade between members rose to $41 billion in 2010, “it represents a much smaller share of each member’s total exports than at its peak in 1997,” said The Economist in 2012.

Membership and Its Benefits

Membership in Mercosur is dependent on meeting and maintaining a number of political and economic criteria.

Mercosur members agree to the free movement of goods and services between member countries. Any change to Mercosur economic policy requires the consensus of the other members, but countries can ask that certain products be exempt to protect local industries. Mercosur members adhere to a number of agreements guiding currency exchange, investment, tax issues, and educational exchanges.

The group also subscribes to the CET, which dictates the tariff members apply to trade with non-member or associate countries. The CET is subject to change and is set by consensus, but has been a source of contention. Argentina and Brazil often favor higher duties to protect local industry, while Paraguay and Uruguay favor lower tariffs. The CET averages between 10 and 12 percent, but often fluctuates.

Associate members are not members of the customs union and do not have voting power in Mercosur’s political bodies, though they do have preferential trade access to the market. Mercosur’s observer countries are Mexico and New Zealand.

After having joined in 2012, Venezuela was ejected in 2016 after human rights abuses and transgressions of the bloc’s trade rules.

Upon entry into Mercosur, Venezuelan President Hugo Chávez said he would give the group a “political Viagra” and “decontaminate it of neoliberalism.” Trouble with Venezuela’s membership began immediately—the country was slow to implement Mercosur trade policies, and it suffered from an economic crisis, especially after oil prices dropped in 2015. Politicians, such as former Argentine President Mauricio Macri voiced concern over the human rights and economic situation in Venezuela, and called on Venezuelan President Nicolás Maduro to release political prisoners.

Venezuela was warned that it would be ousted from the organization unless Maduro restored human rights and press freedoms, but Maduro denied any violations.

In July 2016, Venezuela was set to assume the rotating Mercosur presidency. Argentina, Brazil, and Paraguay announced that they would block the move https://www.wsj.com/articles/venezuela-blocked-from-assuming-presidency… and put the presidency under a joint leadership of the other four members. In September 2016, Mercosur called upon Venezuela to fully comply with the trade bloc’s policies and when it didn’t, the bloc suspended the country in December. In early August 2017, Venezuela was suspended indefinitely, in part as a response to accusations of fraud in the 2017 Constituent Assembly elections.

Despite Venezuela no longer being a part of Mercosur, the country can rejoin, if it follows membership requirements.

Additional elements of Mercosur are its Parliament and the Structural Convergence Fund of Mercosur (FOCEM). As of 2010, FOCEM seeks to develop regional infrastructure projects to increase integration. Its 2021 budget was $300 million. Paraguay receives the largest amount of funding from FOCEM, followed by Uruguay.

Mercosur’s 176-member Parliament, https://sapl.parlamentomercosur.org/parlamentar/ known as Parlasur or Parlamento, with members elected from each country, has no enforcement powers. Its role is to advise Mercosur’s decision-making bodies.

FTAs and Relationship with China

The bloc also has a number of free-trade agreements (FTAs) with third parties, including Chile, Colombia, and Peru, as well as Israel, Egypt, Lebanon and the Palestinian Authority. The bloc prefers regional trade deals over trade agreements with singular countries. Negotiations for an FTA with the EU began in 1995, were suspended in 2004, and continue to be of ongoing discussion. In 2019, members reached an agreement with the EU to sign an FTA that has not yet been ratified.

China has sought raw materials—namely grains and oil—from South America’s markets. Beijing announced its plan to increase bilateral trade with the region to $500 billion by 2025. Its trade with Mercosur was roughly $107 billion in 2018.

Uruguay, which joined China’s Belt and Road infrastructure initiative in 2018, has been moving forward with an FTA with Beijing, drawing concern from other Mercosur members. A trade agreement that doesn’t involve all Mercosur members would contravene the group’s rules. At the Mercosur Summit in July 2022, Argentina’s President Alberto Fernández warned against Uruguay going it alone but suggested the bloc forge a trade deal with China.

Meanwhile, Paraguayan President Mario Abdo Benítez expressed concern about the country’s increasing role, saying: “China's entry into the region with preferential tariffs worries Paraguay.” He pointed to China’s competitive production costs as a threat to the domestic industries of Mercosur members. In addition, Paraguay is the only country in South America that maintains relations with Taiwan, complicating Beijing ties. 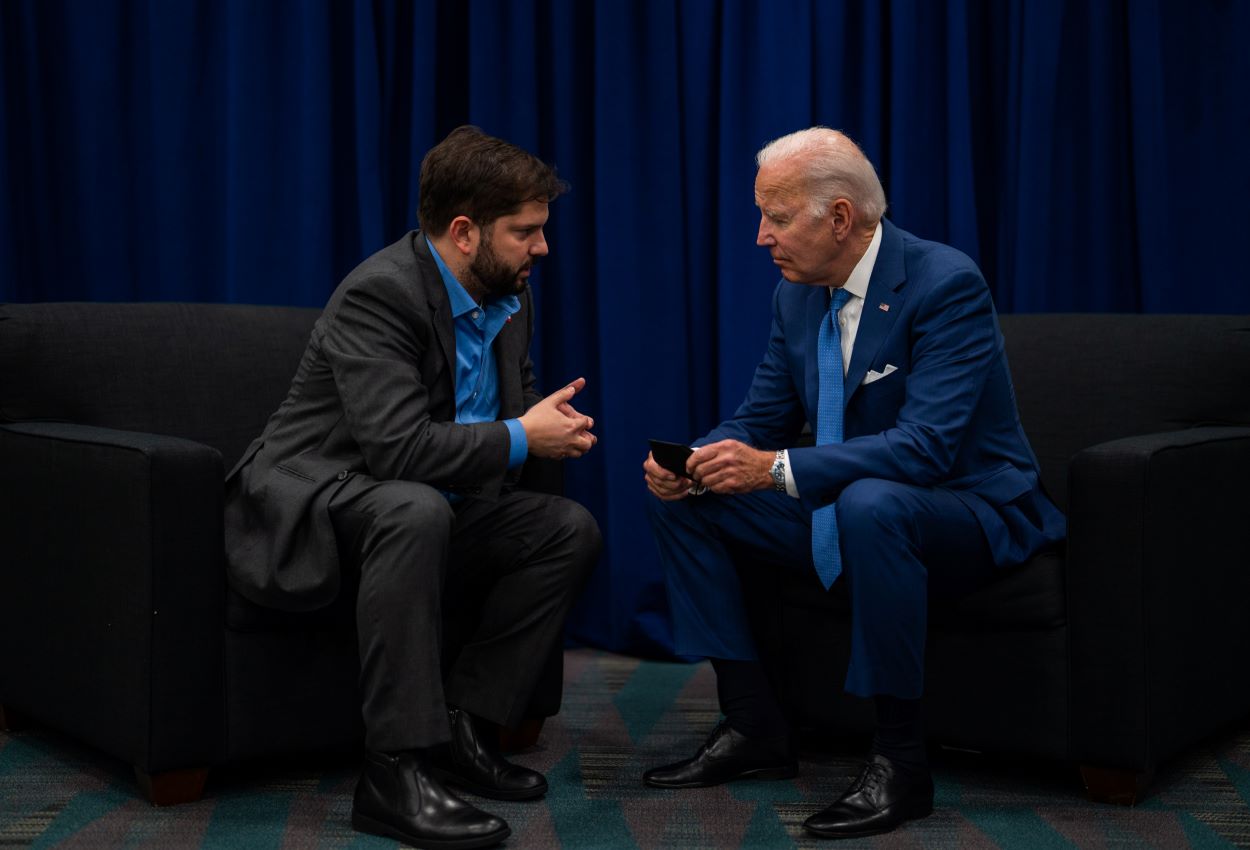