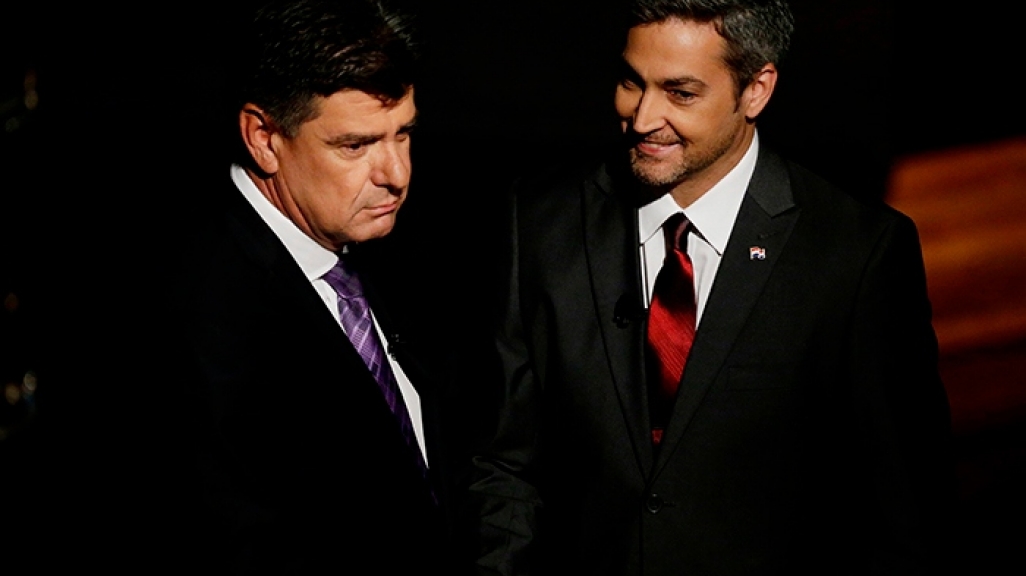 The governing party presidential candidate leads polls ahead of the April 22 election. Young voters could play a big role—if they show up.

With Latin America’s three most populous countries voting for president this year, it’s easy to overlook the election in landlocked Paraguay (population 7 million) that takes place on April 22. The 29-year-old democracy will elect a president, vice president, 45 senators, 80 deputies, and 17 governors, all to five-year terms. Neither presidents nor governors can seek reelection, which became a contentious issue last year when current President Horacio Cartes tried to amend the Constitution in order to run again.

The ruling Colorado Party’s Mario Abdo Benítez and Efraín Alegre of the left-leaning Grand National Renovating Alliance (GANAR) are battling for the presidency. While Abdo Benítez was not Cartes’ pick in the party primary, his election would continue the control held by the Colorado Party, which has ruled the country since 1947, with the exception of impeached President Fernando Lugo’s time in power from 2008 to 2012. Lugo’s election was the first peaceful transition of power from one party to another in Paraguay. Will 2018 mark a second turn of power for the other side? Not likely, if we’re to believe the polls that give the Colorado candidate 20- to 30-point leads. But there’s a growing cohort to consider: voters born after the Alfredo Stroessner dictatorship ended in 1989.

Here’s what you need to know ahead of the country’s single-round vote, from election basics to the candidates’ profiles to the youth factor.

Paraguay transitioned to democracy in 1989 after factions in the ruling Colorado Party staged a coup against President Alfredo Stroessner, before the Constitution instituted in 1992 made voting mandatory. In 1998, voter turnout peaked at 80.5 percent. Since then, voter turnout has dipped to below 70 percent, despite a 2012 law that automatically registered voters once they turned 18 and also expanded the vote to expats. In the last general election in 2013, 68.5 percent of voters cast ballots. The largest share of the country’s 4.2 million electorate live in the capital Asunción and the Central department immediately around it. Taken together, these areas account for 37 percent of voters.

The young democracy is also quite literally youthful, with 25 as the median age, making Paraguay the second youngest in South America after neighboring Bolivia. This year, 43 percent of the electorate will be 18–34 years old, most of whom won’t have a personal connection to the years of the dictatorship. This makes them less likely to have a strong affiliation to either the Colorado Party (known officially as the National Republican Association, or ANR) or the Authentic Radical Liberal Party (PLRA), the largest member of GANAR.

But younger voters are less likely to show up at the ballot box. For example, in 2013, turnout among citizens age 40 and over was 70 percent compared to 63 percent for 18- to 24-year-olds.

The candidates: Same old with a twist

On the Colorado Party’s ticket, Mario “Marito” Abdo Benítez, 46, is a former senator and president of the Senate who led a dissident faction of his party and went on to beat Cartes’ chosen successor Sebastián Peña in the December primary. The conservative candidate has been a vocal critic of the president and pushed back on attempts to pass a 2017 constitutional reform that would allow reelection. Facing opposition in the Congress and a public so upset that activists set the parliament on fire last year, Cartes dropped the bill. Abdo Benítez now counts on Cartes’ support as the Colorado Party aims to appear united and avoid the internal divisions that led to the conservative party’s defeat in 2008. Since the primaries, he’s also changed his rhetoric on reelection, saying that his government would take it into consideration, even though 93 percent of the country opposes it. But Abdo Benítez has emphasized that a reelection amendment is not a priority and would be secondary to his plans to reform the country’s judicial system and root out corruption.

Though Abdo Benítez may not be a member of the Colorado Party establishment, he has ties to the dictatorship as the son of Stroessner’s one-time private secretary. His running mate for vice president is Hugo Velázquez, whose resigned from his seat in the Chamber of Deputies this month to dedicate himself to the campaign.

Efraín Alegre, 55, of GANAR is making his second run for the presidency. The former congressman served in the Lugo administration as public works and communications minister before losing to Cartes in the 2013 election by 8 points. This time, the leader of the PLRA is counting on expanding his voter base with journalist Leo Rubín of the more left-leaning Guasú Front as his running mate. Rubín is the ticket’s hope for turning out millennial voters concerned with the environment and social issues, as well as vegetarians and yogis like himself. However, the last First Análisis and Estudios poll shows the youth vote is tilting toward the Colorado ticket, with 55 percent of 18- to 25-year-olds supporting Abdo Benítez compared to 33 percent for Alegre.

The polls and the issues

While Paraguay is one of the poorest countries in Latin America, its economic growth has been one of the bright spots of the region as it withstood the sluggishness its neighbors experienced in 2015 and 2016—a feat the International Monetary Fund called “enviable economic stability.”

Economic issues, however, do not rank high on voters’ priorities list, per a study by the nonprofit Centro de Información y Recursos para el Desarrollo (CIRD). Instead, security is the foremost concern, with street crime on the rise. The lack of an independent and credible judicial system has resulted in high rates of impunity, and both crime and corruption are among the five top concerns in CIRD’s February survey, along with health, education, and job creation.

Sunday, April 15, marked the first and only debate between the presidential candidates, with succeeding headlines highlighting more similarities than differences in the candidates’ platforms. Among them was both candidates’ support for judicial reform via a constitutional amendment to strengthen the rule of law and, in turn, attract foreign investment. But rooting out corruption has been a major talking point for Abdo Benítez more so than for Alegre, whose 2013 campaign was mired in a vote-buying scandal. Alegre’s campaign, instead, has focused more on combatting organized crime and fighting drug trafficking.

While both candidates also want tax reform, they differ on strategy. Abdo Benítez proposes expanding the tax base, which now only counts on the contributions of some 770,000 Paraguayans. Currently the country applies a 10 percent personal and corporate income tax rate across the board, and Alegre is proposing progressively introducing tax brackets. The candidates also agree on increasing Paraguay’s investment in education to 7 percent of GDP from 4.5 percent.

Female inclusion was another point of accord, in which both Abdo Benítez and Alegre emphasized their support for the current gender parity law before the Chamber of Deputies, one that Abdo Benítez brought before the Senate during his time as the house’s president. Paraguay already requires that women make up 20 percent of party lists, but women make up just 17 percent of the Congress. The new law would raise the gender quota to 50 percent, and require women’s representation in cabinet posts as well. In the debate, Alegre promised his cabinet would be 50/50 along gender lines, even if the current law is not passed.